Can you imagine the uproar, on campuses and in the press, if the Pope, or any bishop, cardinal or priest had been so blatantly “lookist” and “sexist”?

The Dalai Lama could be reincarnated as a blond woman in his next life, he quipped in a recent interview from his home.

But not just any blonde.

She should be “mischievous” and “her face must be very attractive [or] nobody [will] pay much attention,” the monk said in an interview on Friday, according to The Sunday Times of London.

Got that? The Dalai Lama says if a woman isn’t pretty, no one will pay attention to her. Her looks are her passport to credibility. And no one is screaming of fainting about it. 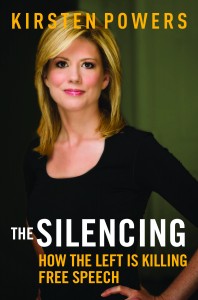 Ironically, over the weekend I happened to notice the very blond and pretty, very credible and smart Kirsten Powers on Twitter, taking a lot of abuse — from the very “tolerant” sorts of people who would never, ever objectify a woman (except to make her a president) — for being a “pretty blond on Fox News”.

By inference, Powers is being reduced to an empty-headed pretty-girl by people who resent the hell out of her being so straightforward in her rather brave new book, The Silencing:How the Left is Killing Free Speech.

The people she has written about with typical forthrightness are so incensed by her evidence-based thesis that they are everyday making her argument for her — and giving her fresh fodder for a followup — by revealing themselves to be precisely as illiberal as she describes, all over social media.

Now, since they haven’t intimidated her, and they can’t shut her up, some will try to silence her by implying that she a lady fair and stupid; how could it be otherwise, given the company she keeps?

In his book Beyond Dogma** , the current Dalai Lama clarifies the Buddhist view: “A sexual act is deemed proper when the couples use the organs intended for sexual intercourse and nothing else . . . homosexuality, whether it is between men or between women, is not improper in itself. What is improper is the use of organs already defined as inappropriate for sexual contact.”

Oy! That tracks so closely to Catholic teaching you’d think he’d be made to pay for it.

But he’s not; he gets the free pass. All he has to do is smile, and wave and not be Catholic, or any manner of orthodox Christian or Jew — or an Iraq-based nun trying to tell the truth about ISIS and its Christian persecution — and the cool kids in the cafeteria keep their ironic silence, and give him the protective pass it keeps in special reserve.

It’s pathetic, how predictable it all is.

**I am informed that copies of Beyond Dogma available in the West no longer contain the instruction quoted here.

May 20, 2015 Hillary's Press-Protection Pass Slowly Being Revoked
Browse Our Archives
get the latest from
Catholic
Sign up for our newsletter
POPULAR AT PATHEOS Catholic
1

Dale Ahlquist is on a mission...
Chaos and Old Night
Related posts from The Anchoress

Unsullied: Why Pope John Paul II Is Still...
On the Warpath to Destroy St. John Paul the Great I can't...
view all Catholic blogs
Copyright 2008-2020, Patheos. All rights reserved.