Gay Marriage and What We’ve Been Saying

Gay Marriage and What We’ve Been Saying June 27, 2015 Elizabeth Scalia

This past week I got to spend some time with Sister Rosemary Nyirumbe, the Catholic sister who takes in girls who have been brainwashed, made to kill, been held captive, raped and left to raise the resulting children on their own. She teaches them skills, and helps them to become self-sufficient. As I watched a short documentary about Sister Rosemary and heard these girls talking about what they have been through, I couldn’t help but to think how, in comfortable America, we’re busy carrying on about “microaggression” and the “rape” epidemic that is partly about regret for one’s behavior, and everything else is all about the gay.

These people are trying to reestablish the light that was stolen from them when they were children. They really don’t have time or the inclination to feel “unsafe” if someone rolls their eyes.

I’ll be writing more about Sister Rosemary in the coming weeks, but for now, know that Sewing Hope is on Netflix. In the meantime, I just wanted to tell you that there is a whole world of horror out there, remind you that Pope Benedict was prophetic, and tell you that ppl should have listened to me when I said “let the state certify and the churches sanctify”, which, some of you might know, I started saying in 2006. A bit late, now…the the taxation, fines, and punitive damage rulings are on their way.

In fact, the silencing has commenced.

Will the church be hurt by the SCOTUS ruling on gay marriage? Yes, next question.

But there will always be a remnant. The thing about remnants is that they identify themselves after a carpet has been laid or a robe has been cut, not before. Remnants do not stop a construct from happening; they survive it. 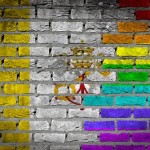 June 29, 2015 Fr. Robert Barron on Gay Marriage: "We're still standing..."
Recent Comments
1 Comment | Leave a Comment
Browse Our Archives
get the latest from
Catholic
Sign up for our newsletter
POPULAR AT PATHEOS Catholic
1

Sharing? Miracle? Both? Nope!—Multiplying Loaves and Fish
Sorry to U.S. Bible readers, but Jesus’ wonder of multiplying loaves and...
view all Catholic blogs
What Are Your Thoughts?leave a comment

One response to “Gay Marriage and What We’ve Been Saying”