Moments ago DADT rounded the final bend to the graveyard of history.  Cue Bryan Fischer, one of the most homo-obsessed Christians in the country, to sound the horn of the apocalypse.

I can’t think of anyone this obsessed with gays, including other gays.  Today he is positively dripping with campy humor about a “new Marine motto: ‘The Few, the Proud, the Sexually Twisted’” while solemnly intoning that the vote will be “a fixed marker pointing to the instant the United States sealed its own demise….”

As for the claim that other militaries have openly serving gays:

[T]hey could allow homosexuals to serve in their military because we didn’t allow them to serve in ours.

…Those days are now gone. We will no longer be able to bail out these other emasculated armies because ours will now be feminized and neutered beyond repair, and there is no one left to bail us out. We have been permanently weakened as a military and as a nation…and the world is now a more dangerous place for us all.

He loves to use words like “emasculated,” “feminized” and “neutered.”  I just can’t help but think that something’s going on down there below his belt that’s really very scary to him.

Putting speculation about his sexual psychology to the side, he is a particularly hateful man.  I’m sure he’s throwing one hell of a temper tantrum right now.  Hey Bryan, don’t get your panties in a bunch.

I had so much fun with the church sign generator, I thought I’d make this: 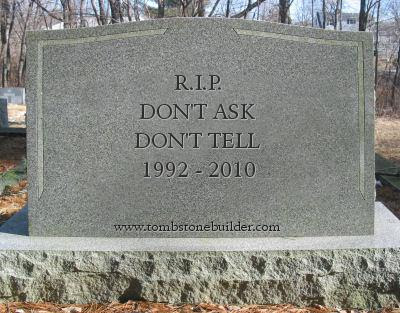