Say what you will about my critiques (sounds better than “attacks”) on the Haredim, even I wasn’t dumb enough to be sucked in by the tales of the dog stoning in Jerusalem.

That gives me leave to report on the truly silly reports that come to me over the transom all day long.  Take, for example, this report from the Jerusalem Post:

For the past three weeks, Lior Finkel hasn’t needed to set an alarm clock – she’s gotten a wake-up SMS at 7 a.m. each day. Finkel, an aide to MK Ilan Gilon (Meretz), and many other parliamentary aides, have been receiving daily text messages from an organization whose goal is to encourage Jews to put on tefillin in the morning.

And for those of you with any kind of SMS-ing ability, you know what a complete pain in the tuchis it is to constantly receive unsolicited texts.

“Beginning in the middle of May, I received messages at 7 every morning – except Saturday – telling me to put on tefillin and bring redemption,” Finkel said. “I sent an SMS asking whoever is sending it to stop, but I was ignored, and when I called, no one answered.”

Finkel later discovered that many other parliamentary aides with cellphones provided by the Knesset were receiving similar early-morning messages, and the group of aides filed a complaint with Knesset security.

“Security told us to go to the police, and the police said that there was nothing illegal about the text messages,” Finkel said. “It can’t be that someone can systematically harass people like this without consequences.”

Meretz is the most left-wing of the Israeli left.  So any frum Jew who harasses a Meretz member with irritating requests for prayer should be prepared for a creative response:

“I decided that I’d had enough, and I sent a message saying: ‘I put on tefillin, now leave me alone,’ along with a picture of myself, a woman, wearing tefillin,” Finkel said.

“The next day, the harassment stopped,” she said. “I guess they were right – I put on tefillin, and redemption came.” 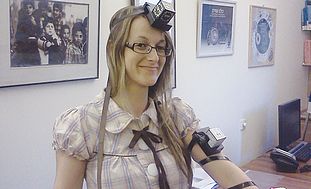 Personally, I think they go quite nicely with her outfit.

June 17, 2011
Circumcision: Not A San Francisco Treat
Next Post