“The Feast of Weeks” Is Here Again! 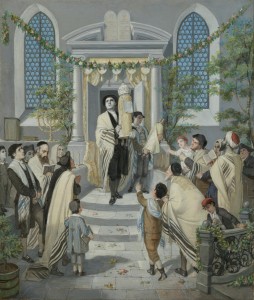 Last night we celebrated Shavuot (archaically known as “The Feast of Weeks”) at our congregation.

Talk about a difficult holiday for Secular Humanistic Jews! This one’s got almost nothing to offer. There are very few rituals that merit any kind of modern application or re-interpretation. The main theme of “receiving the Torah at Sinai” is not exactly inspiring for people who openly acknowledge that no Torah was received at any place called Sinai (or Horeb, for that matter).

The Torah has three very ancient agricultural festivals that people still observe today. Two of these, Passover and Sukkot, were already associated with mythical narratives by the time of the Torah’s final redaction. Passover absorbed the grand narrative of the exodus from Egypt. Sukkot is associated by Leviticus with Israelites wandering in the wilderness. (Something about Sukkot seems newer. If we can trust Nehemiah 8:13-18, no one had celebrated it since Joshua. And we all know that Joshua was as fictional as the exodus and wilderness wanderings.)

According to the Torah itself, Shavuot is the late harvest festival. The text does not connect it to any historical occurrence. But owing to its proximity to Passover, the ancient Rabbis assigned it a pretty spectacular event, the revelation of the very Torah that fails to mention that the day on which it was revealed was Shavuot.

For a few Jews, mostly Israelis, there continues to be some interest in celebrating the holiday’s agricultural roots. Kibbutzniks still put on big tractor parades. But here in the urban Diaspora, this aspect of the holiday is not too compelling, nor was it all that relevant to the increasingly urbanized Jews of 2,000 years ago. Hoping to make it a more meaningful day, the Rabbis created the connection to revelation. Today’s secular Jews aren’t really into that, either. If it weren’t for the Reform movement’s invention of Confirmation, hardly any non-Orthodox Jews would have any interest in attending festival services at all. Oh, and there’s the dairy food. It’s a big holiday for those who are not lactose-intolerant.

Medieval Kabbalists invented a tradition of remaining awake all night to study Jewish texts. They called it Tikkun Leil Shavuot (“Corrective for the Night of Shavuot”) perhaps based on a midrash that the Jews slept really well the night before the revelation (Shir Ha-Shirim Rabba, 1, 12:2), prompting the question, “How could they even sleep at all on such a big night?!” So the Kabbalists proposed the “Corrective” of staying up to learn all night. Some secular communities have recently adopted the tradition, turning it into an all-night cultural and study event.

As for me, I find little of value in the holiday beyond historical appreciation. Perhaps if we had a secular Tikkun Leil Shavuot where I live it might be of interest. Meanwhile, I have my own plans for the holiday. The American Humanist Association chapter that I head up will be meeting and later in the day I’ll be conducting a wedding, something that no theistic rabbi would consider doing on the holiday, despite the fact that virtually no one is celebrating it.

Shavuot begins tonight (Saturday) and lasts for one or two days depending upon one’s tradition. For those of you celebrating, I wish you a happy holiday! 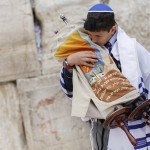 May 25, 2015 This Is the Torah!
Recent Comments
0 | Leave a Comment
"nice blog. I will keep visiting this blog very oftenMortgage Broker in Orange NSW Australia"
Finance Mart Trumpism Unites Neo-Nazis, Jewish Defense League
"nice topic.top colleges in canda"
Pacific Link College Prayer Is Indeed Powerful
"No true secular humanist?That’s a first"
(((-MARK-))) Atheist Jew? Apparently This Is Not ..."
"very informative information thanks for sharing it.. Finance Broker in Orange NSW Australia"
Finance Mart Some Thoughts About Islam (And The ..."
Browse Our Archives
Related posts from The Atheist Rabbi