This Is the Torah!

On Friday night at my congregation we celebrated Shavuot (see my previous post about the holiday itself).

My presentation was entitled “V’zot Ha-Torah – This is the Torah,” a line taken from the traditional Jewish liturgy. It is chanted after the Torah reading when the scroll is opened and raised high for all to see its words: “This is the Torah which Moses brought before Israel, given by the mouth of Yahweh and delivered into Moses’ hands.” They sing this in congregations of every denomination of theistic Judaism (even the liberal ones where they don’t even believe it).

My PowerPoint presentation began with pictures of this ritual along with some others that are common in all kinds of synagogues. These include marching around with the Torah scroll as people kiss it and pointing to the open scroll with the tallis (prayer shawl) fringes or a pinky finger and more kissing. Lots of kissing. Because that’s what you do with something that you really love.

I love the Torah, too, but for very, very different reasons, none of which make me want to march around with it, lift it reverently or plant my lips on it. I don’t want to do any of this because I’ve actually read the Torah. A lot. So I know what’s in it. And don’t give me this business about interpretation and making it live through new ways of looking at it and understanding its eternal wisdom. I tried that, too, and found it wanting. Sure, it’s interesting to see how later rabbis interpreted it and even gave it an upgrade (see the apologetics for Lex Talionis). But it’s just downright dishonest to claim that these upgrades represent its real intent or are now the best way to understand it. Worse, such claims are not made solely by Orthodox rabbis. Modified versions of this approach also characterize liberal Judaism.

The remainder of my Friday night presentation was a look at some of the stories in this Torah that Jews are knocking each other over to smooch.

We heard the story of Noah’s son, Ham, who seems to have raped his drunken dad (or at least committed some other kind of sexual crime when he “saw the nakedness” of his father and was cursed for it). We then moved on to Lot’s daughters who most definitely had sex with their father after plying him with wine. (Ew.) We also heard about the rape of Dinah / slaughter of the Shechemites; about that screwy business with Judah and Tamar; about the ugly homicide committed by Phinehas the Priest when he stabbed a copulating couple right through both of their bodies; and, finally, about the vicious genocide of the Midianites when Moses and Yahweh got ticked off because they let the little boys and mommies live and not just the little virgin girls who – after their mommies and brothers were slaughtered – were divvied up as booty (literally).

Honestly, there are so many stories like this in the Torah alone (never mind the rest of the Hebrew Bible) that the hardest part of preparing was deciding what to exclude.

Yet I say I love the Torah. How can that be? It’s such a violent and strange book!

What I love about the Torah and the rest of the Bible is that they are ancient artifacts that, when studied properly, can give us a great deal of insight into the history of the Israelites. So, for example, why would there be a story about Lot having sex with his daughters? Because the writers of that text had some not-so-nice feelings about the nations that supposedly descended from these incestuous acts. Why is the story of Shechem and Dinah in the book? Because it was circulated by Judahites who really disapproved of the northern kingdom of Israel whose capital was in Shechem. If you want to “dis” your rivals’ capital, tell a story about how they acquired it by slaughtering a bunch of helpless men recovering from their late-in-life self-circumcisions. And then there’s Phinehas’ homicide, meant to demonstrate how faithful the Aaronides were to Yahweh and why they deserved to be the real priests and not the competing Levites.

The stories are violent and full of sex for the same reason our movies and television shows have so much violence and sex. It’s entertaining, especially when told around the campfire.

The problem is that over time people combined these stories into sacred literature. (That’s why there are so many contradictions in the Bible.) And then they started revering it and ultimately marching around with the book and lifting up little children to kiss it.

I began my career as a Reform rabbi and I paraded Torah scrolls around and kissed them on many a Sabbath and holiday. It was only when I started thinking – thinking rationally – about its contents that I finally realized how ridiculous it is to kiss it and treat it as something holy.

(P.S. If you happen to live in greater Detroit, you can learn more about who wrote the Bible and why at a special summer class I’m offering. Go to birminghamtemple.org for more information.) 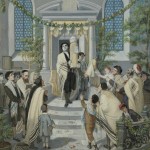 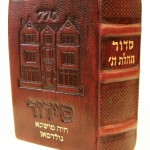 May 27, 2015 A God That Could Be Real but Isn't
Recent Comments
0 | Leave a Comment
Browse Our Archives
Related posts from The Atheist Rabbi