the intolerance of the “tolerant” left…

the intolerance of the “tolerant” left… February 2, 2012 Katrina Fernandez 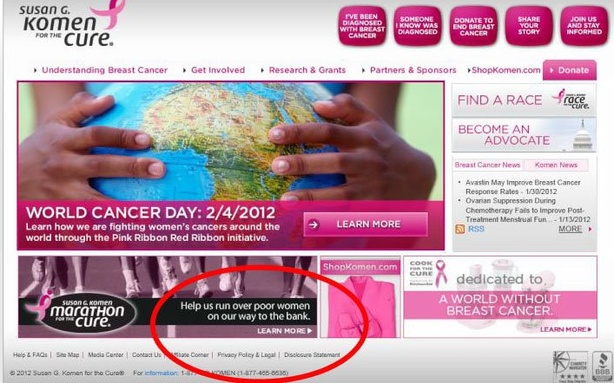 PS- I predicted PP was going to use this “blow” to their financial advantage and begin raking in the pity contributions. Well, I was right. Mayor Bloomberg is quoted as saying “Politics have no place in health care”. I am sure the irony is utterly lost on him.

All together every one … abortion is not health care.

I’m also sure Cecile Richards is all but piddling herself with glee at the venom and bile she’s caused to be directed to Susan G Komen. PP is the one, after all, that intentionally leaked the story to the Associated Press to incite public outcry and fuel a fund drive.

It’s all about the money. That’s all it’s ever been about.

February 1, 2012
Why the hell should liberals care that Susan G Komen cut off funding to Planned Parenthood...
Next Post

February 2, 2012 Candlemas...
Recent Comments
2 Comments | Leave a Comment
"Pithy and so, so, true. If it were possible, I'd post a million of these ..."
Vicky Hernandez #whyIstayed Why Women Stay In Domestically ..."
"All the best to you, Katrina! We'll miss you. Thanks for sharing your journey with ..."
Lori Ten Years is a Long Run…
"Bon voyage on your new endeavours. And thank you."
Cordelia Ten Years is a Long Run…
"I will miss your unique, funny, honest voice. Thank you for all the years of ..."
Jim Vogel Ten Years is a Long Run…
Browse Our Archives
get the latest from
Catholic
Sign up for our newsletter
Related posts from The Crescat