Chicken Gate – An Exercise in Media Induced Hysteria and Fascism…

… I’m eating a Chick-Fil-A sandwich as I type. I guess that means I hate the gays, or deserve to get cancer or something.

I… I… don’t even know what to say about this media induced fecal cyclone that is Chicken Gate. It’s so absurd it’s laughable. You got the mayor of Boston involved, and then… get this…Chicago Mayor Rahm Emanuel says Chick-fil-A has no place in the city of Chicago. Considering the homicide rate in Chicago is statistically worse than Kabul Mr. Emmanuel has much bigger problems.

The funniest part; the president of Chick-Fil-A, Dan Cathy, never even said he hates homosexuals. All he did was confirm that he supports traditional marriage and that he models his business ethic on Christian principals. But somehow, in the liberal mind, having a difference of opinions equals hate. 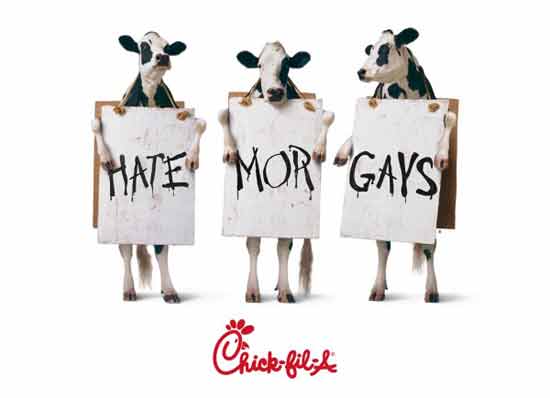 Fascist, all of them.

July 26, 2012
Why Does Obama Heart Planned Parenthood So Much...
Next Post

July 27, 2012 Breakable....
Recent Comments
0 | Leave a Comment
"Pithy and so, so, true. If it were possible, I'd post a million of these ..."
Vicky Hernandez #whyIstayed Why Women Stay In Domestically ..."
"All the best to you, Katrina! We'll miss you. Thanks for sharing your journey with ..."
Lori Ten Years is a Long Run…
"Bon voyage on your new endeavours. And thank you."
Cordelia Ten Years is a Long Run…
"I will miss your unique, funny, honest voice. Thank you for all the years of ..."
Jim Vogel Ten Years is a Long Run…
Browse Our Archives
get the latest from
Catholic
Sign up for our newsletter
POPULAR AT PATHEOS Catholic
1