… I’ve long since given up the self destructive habit of comparing myself to crafty moms, those MacGyver’s of Motherhood. I’ve burned enough meals, killed enough plants and set enough household items on fire to know my limitations. In the evolutionary nature in which God made us humans, I’ve learned to adapt.

It is through these adaptations that I’ve learned quite a few perfectly acceptable short cuts, because there’s really nothing wrong with “good enough”, especially when it comes to arts and crafts. Being “crafty” really is unimportant in the grand scheme of parenting. You don’t need to be a master at the glue gun in order to be a good parent and don’t let anyone tell you otherwise.

There’s absolutely nothing wrong with making mistakes and setting a few things on fire. It’s just an opportunity to learn how not to do something. So when I set my Advent wreath on fire one year [FYI-fresh greenery is flammable] I did not take it to heart. I adapted. And got fire insurance.

To make a fire-proof, and now last minute, Advent wreath you can use any greenery you have in your yard. One year I used clippings from a holly bush. It looked very nice… prickly as hell, but nice. You can use bottom branches of your Christmas tree, if you have a real one and it’s already up. However, learn from me! Learn! Replace this greenery at least once or it will dry out and become table top kindling.

You know what. Skip the greenery. Someone suggested taking a cookie tin or nice bowl and filling it with sand or rocks and putting the candles in that. Orthodox style. 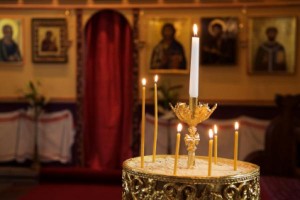 Ta da! Fire proof. You can add greenery to the outside of the bowl if you must. And if the stores are old sold out of purple and pink candles, which happened to me one year, purchase cheap-o white candles and use ribbon to tie around each candle. 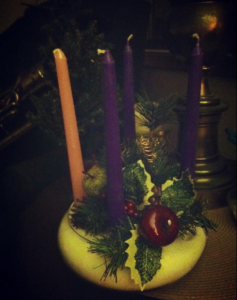 Very pretty. And nobody visits the burn unit of the local hospital.

*nota bene: flameless candles are anathema on this blog.

December 3, 2012
Looking Pretty Isn't Their Only Talent...
Next Post

December 6, 2012 We've Officially Jumped The Shark - Fr. Z and Voris Out To Sea...
Recent Comments
0 | Leave a Comment
"Pithy and so, so, true. If it were possible, I'd post a million of these ..."
Vicky Hernandez #whyIstayed Why Women Stay In Domestically ..."
"All the best to you, Katrina! We'll miss you. Thanks for sharing your journey with ..."
Lori Ten Years is a Long Run…
"Bon voyage on your new endeavours. And thank you."
Cordelia Ten Years is a Long Run…
"I will miss your unique, funny, honest voice. Thank you for all the years of ..."
Jim Vogel Ten Years is a Long Run…
Browse Our Archives
Related posts from The Crescat