We’ve Officially Jumped The Shark – Fr. Z and Voris Out To Sea…

… Someone once referred to me as a “celebrity blogger”. I guess because I receive monetary compensation for my writing maybe? Or maybe it’s because I was invited to the Vatican’s Blog Meeting in Rome last year. But so were 149 other bloggers. And I have it on good authority I was there for comedic relief and the decision was not based on my merits as a writer or a Catholic. I’m nominal at best.

No. That’s not me. When I think “Catholic Celebrity” a dozen names come to mind, but not my own. I think Lino Rulli, that hater of pale girls. Or that priest that used to be on EWTN. No, not that one. The other one. Wow, being on EWTN sounds more dangerous than showing up for work on the USS Enterprise wearing a red shirt

At the top of my mental celebrity list are Fr. Z and Michael Voris. Now don’t mistake me. Referring to someone as a celebrity isn’t meant as an insult. Celebrities are just individuals who are widely known by a group of people. They are generally admired. Admiration is not a bad thing either. It’s ok to admire people who are good or do good, like Fr. Groeschel. I admire Lino Rulli for his candor and wit. Fr. Z for his infinite knowledge of the Catholic faith. Micahel Voris is admired by many for his dogged determination to expose lies and falsehoods and his mesmerizing man hair.

It only makes sense that two of the top renown Catholic internet personalities, Fr. Z and Michael Voris, should have their paths cross at some point. Perhaps to write a book together on Catholic teaching or to give talks on the spiritual benefits of Advent traditions, or take a cruise together. Wait. What?

If you made it past the two minute mark, God bless ya.

Please permit me to express my utter disbelief and give two reasons why the idea of a Lenten cruise just simultaneously blew my mind and made me laugh hysterically.

1) For the most obvious reason; It’s duiring Lent.

You know, Lent? That penitential time of the year when we celebrate the gruesome crucifixion of Our Lord by taking lavish “retreat” cruises around the Caribbean.

Look, I get the need to take a vacation. I need a vacation. Right now. And a stiff drink… but A Lenten retreat at sea? At least back up your pretense with a pilgrimage somewhere that has even the tiniest semblance of desert atmosphere. Or, I don’t know, go somewhere legitimately holy. If an apparition of Our Lady has been seen floating in the middle of the Caribbean Ocean, then forgive me. Just calling something a “retreat” during that particular liturgical season doesn’t necessarily make it Lent-ful or appropriate in practice.

I find it terribly gauche that the promotion video claims the purpose of this thousand dollar cruise is to spiritually “reinforce” our faith. I can name a dozen cheaper and more spiritually beneficial ways to reinforce my faith and none involve an all you can eat seafood buffet and Vegas style show tunes.

Last I checked, daily mass is offered free everywhere. Confession is usually weekly and also free. Unless they’ve changed that and there’s now a fee. I don’t know. It’s been a few months. Look, if you’re seriously looking for a way to “recharge”, “reinforce your faith”, and “rest in faith” then go to Adoration! Also free, I might add.

The idea that a Catholic needs to spend this type of money in order to experience some spiritual fulfillment just blows my mind. Call it what it is and pass around the plate. The $1083.89 cost of this trip is for the privilege to be in the company of Fr. Z and Michael Voris and to bask in the luxurious comfort of a cruise ship. Again, better company and comfort can be found in Adoration. Challenge me on that.

I’m not arguing with Voris that pilgrimages and retreats can indeed reignite the fires of our faith. It’s why people flock to holy places by the hundreds of thousands every year and push themselves beyond their physical limitations to walk the Camino across Spain. Rome is never lacking for pilgrims. And yes, these trips cost a pretty penny. There are very few true pilgrims anymore, begging alms and lodging along the way.

Spending the money on a pilgrimage to visit relics and holy sites is not a bad way to spend money. Neither is going on a retreat. And neither is doing any of these things with the company of a priest. However, retreats are usually held in monasteries and convents which charge very little for their accommodations. They don’t have entertainers and staff to pay so the savings are passed on directly to you. How thoughtful of them.

You see where I’m going with this. This voyage at sea is clearly not a retreat. There’s a ginormous difference between spending that kind of dough on an actual pilgrimage to Lourdes or going on a retreat at Clear Creek and a cruise to the Caribbean on a luxury liner. One is at a holy site & the other is a place where holy people live, usually in austere conditions. So what of a cruise ship in the middle of the Caribbean then? Pardon me, but this retreat seems to imply that merely being in the company Fr. Z and Michael Voris surrounded by like-minded Catholics is the source of “holiness” and exactly what one needs to recharge spiritually during Lent.

Look, I’ll be the first to admit this cruise sounds like a rockin’ good time. I’d pay that amount to go hang out on a floating castle with cabana boys bringing me an endless supply of fruit drinks out of coconut shells. There’s nothing inherently wrong with having a good time and if you got the cash laying around why not take a cruise and rub elbows with Catholic aristocracy. But to call it a retreat is kind of insulting.

Just call it a cruise with Fr. Z and Michael Voris. No shame in that. Fr. Z is a lot of fun to hang out with in a bar and if people want to pay to be in his company that’s their prerogative, but it would be more prudent to leave the “retreat” nonsense out of it and pick a more appropriate time on the liturgical calendar.

Lastly, I wonder how they’ll manage to pull off the liturgical logistics for a boat full of neo-con purists. Aren’t Voris’s fans usually the ones that have a very low tolerance for liturgical impurities and anything modern looking? Will there be a chapel on the Ruby Princess and will it have altar rails? And if not will Michael Voris do an exposé on the mass that Fr. Z celebrated in a make shift chapel that didn’t have kneelers?

Really, this is such a phenomenally unwise move for Fr. Z. As Terry noted, “Voris is pretty much a persona non grata with many bishops, dioceses, not to mention the USCCB.” I mean for goodness sake, his business can’t even identify as “Catholic”.

Then again who knows. Maybe I’m dead wrong. Casinos, confession, and show tunes certainly has a Catholic Kitsch factor going for it. 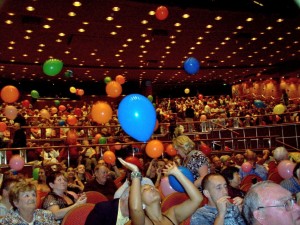 In which case, party on.

December 6, 2012 I know it's dangerous and someone will probably get harmed in the process but what's the point of being the grown up in charge of all things if you can't have a little fun with a chainsaw ...
Recent Comments
0 | Leave a Comment
"Pithy and so, so, true. If it were possible, I'd post a million of these ..."
Vicky Hernandez #whyIstayed Why Women Stay In Domestically ..."
"All the best to you, Katrina! We'll miss you. Thanks for sharing your journey with ..."
Lori Ten Years is a Long Run…
"Bon voyage on your new endeavours. And thank you."
Cordelia Ten Years is a Long Run…
"I will miss your unique, funny, honest voice. Thank you for all the years of ..."
Jim Vogel Ten Years is a Long Run…
Browse Our Archives
Related posts from The Crescat