… Well this is awkward. Here I was endorsing a pro-life organization only to find out they’re staunchly anti-Catholic. Like Jack Chick anti-Catholic, only more cliche. I’m always amazed to learn the reasons some people give to hate the Catholic Church. They are always profoundly stupid. The reasons, not the people. Though if they weren’t, wouldn’t they be Catholic. But I digress. 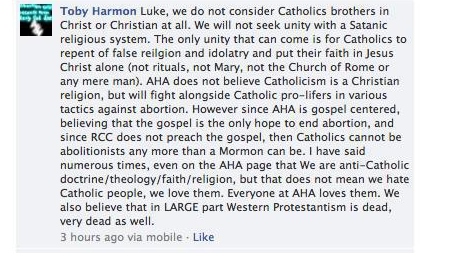 Typical ignorance spouted by someone who knows absolutely nothing about the Church. Idolatry. Mary. Blah blah blah. My favorite is the line “since the RCC does not preach the gospel…”. Stop laughing!

So anyway, who is this Toby Harmon cat? He’s a key founding member of the group Abolish Human Abortion, a pro-life organization looking to drive a wedge into the pro-life movement by pitting Prots against Catholics apparently.

And when they got called out for being anti-Catholic, AHA offered this non-apology apology on facebook, noting it was still all our faults for stirring up controversy. Because calling the Holy Roman Catholic Church a “satanic religious system” in totally non-confrontational. 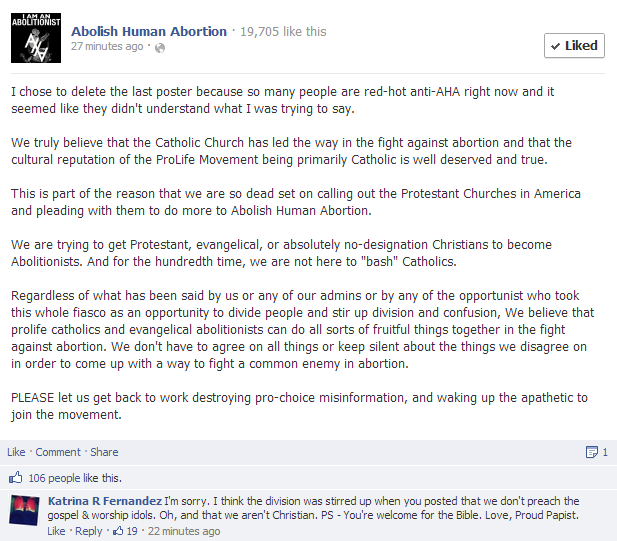 So I apologize, dear readers, if I have made it appear I endorsed this organization here and in my facebook activity. I will always encourage any organization that seeks to end the evil of abortion but not at the expense of my religion. The One True Faith. So I hereby, with no authority what so ever, declare Abolish Human Abortion and Toby Harmon Anathema, we cast him into the outer darkness and judge him damned with the devil.

Ok, so maybe not. But I do hereby publicly withdraw any support I may have previously had for them and encourage you to do so as well. There are too many legitimately good pro-life organizations, Catholic or not, who do marvelous work to be worried about this one very petty, simple minded organization.

January 16, 2013 Where I take Far Too Much Delight In Responding To The Anti-Catholic Group, Abolish Human Abortion...
Recent Comments
0 | Leave a Comment
Browse Our Archives
Related posts from The Crescat