… How about just Pope Francis the Catholic.

I came home last evening to read about our newly appointed pope and share in the joyful celebration with my fellow papists only to find someone invited the designated party pooper… the curmudgeonly never happy trads. I also noticed someone left the back door open because the crazy liberals slipped in too and, in their exuberance, trashed the place.

You’d think I’d be used to the never-happy-always-fighting nature of Catholics. I doubt I’ll ever be used to it, but at least I’m learning to ignore it. Sort of. When it’s this extreme and directed at our Holy Father it becomes hard to ignore. Things are so crazy right now that poor Fr. Z had to call a cease fire on the rabid attacks directed at Pope Francis.

Liberals think he’s going to ordain women and give the thumb’s up to abortion and homosexual marriage. It’s the age of Aquarius, grab your tambourine! Let’s conga line through the Vatican. Alleluia Cha-cha-cha!

Conservatives are in mourning, wailing and gnashing their teeth over the thought of Tango masses in St. Peter’s and women getting their feet washed on Holy Thursday. The Church is doomed! Doomed, I say. Did you see his tacky wooden pectoral cross? I could just die!

Well, aren’t we off to a good start… the traddies are already disappointed and the libbies will be soon enough. Yay! Nobody’s happy. It might be the first time in Church history where everyone is on the same page. A damn miracle, I say.

So what is making people so crazy? The fact that he’s a Jesuit or the fact that he took Francis for his name? I actually had someone comment that since St. Francis is the patron saint of animals and the environment maybe we’ll have a “Green Pope”. Um… that’s not St. Francis.

Look, you don’t get stigmata by recycling plastics, refusing to wear leather, and driving a Prius. The simple fact is, St. Francis lived a life of extreme poverty and devout prayer. He walked to Egypt to convert the muslim Sultan, albeit unsuccessfully, but offered himself up as kindling in a trial-by-fire in order to prove the veracity of the Christian gospel. St. Francis also gave us the Nativity scene creche, is considered the first Italian poet, and he wrote in the local dialect of Umbria instead of Latin decades before Dante.

I think the confusion, on both sides, is being fueled by a few pictures and videos found online showing Bergoglio lighting a Menorah, washing women and drug addict’s feet on Holy Thursday, and in other various stages of charismatic type masses.

Conservatives quake in fear because they see a disregard for liturgical purity, something they hold dear. Something I am not unsympathetic to.

Liberals see his inclusiveness towards other religions and assume that means he believes the same thing they do, which might suggest he’s open to change or their idea of reform.

Here’s all I see… two groups of people, who love the Church dearly and want what they feel is best for Her, but are projecting their own desires into the actions of the new pontiff. The intentions are good, but again, the Holy Spirit is not impressed. Not to be dismissive of anyone’s concerns, but please, he’s been pope less than 24 hours. Allow for the Holy Spirit and the office of pontiff to work on the man before jumping to conclusions first. And remember that promise about Hell not prevailing against the Church? Let’s put a little faith in that too.

Regarding the pictures and videos floating about – I see a humble man washing unwed mother’s feet in a maternity ward, mother’s who chose life. I see a man ministering to sinners and recovering drug addicts and a man who respects other religions who worship the same God. None of these actions contradict the faith or the role of pontiff.

Really there is no need for anxiety and hand wringing or radically hopeful assumptions that his papacy will be the 60’s again. The concern is genuinely appreciated and thank you for caring. But please, I implore you have faith and remove your own desires from the equation. Obedience and prayerful faithfulness is the only response required of us, the laity.

Let me leave you, kind readers, with this image. The first act of his papacy, visiting his Mother… 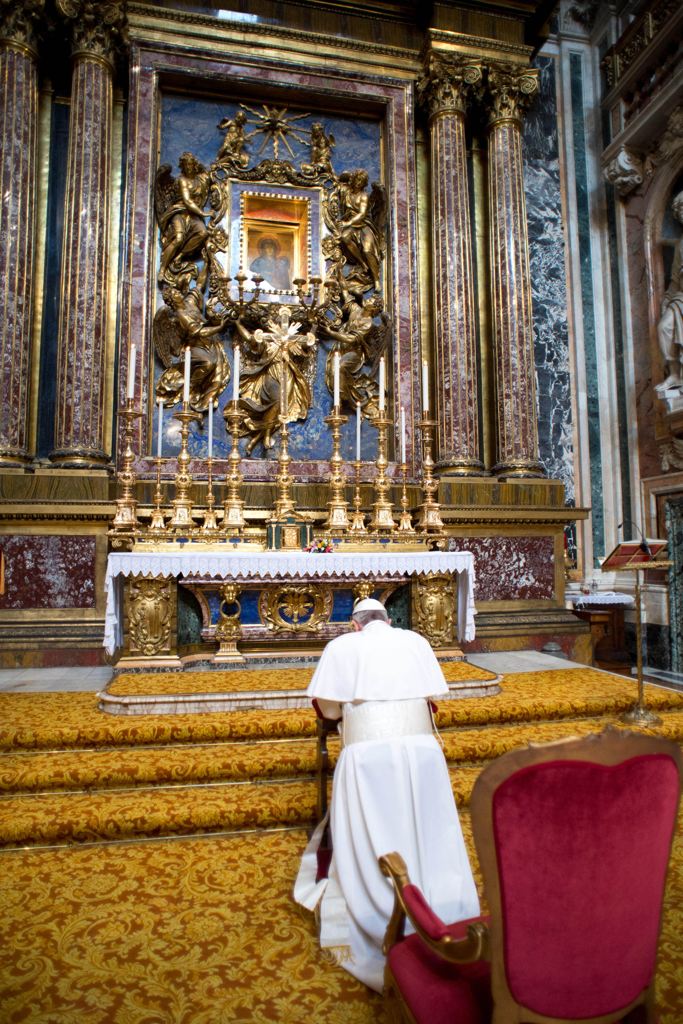 Isn’t this a beautiful image? Doesn’t it calm your nervous heart? It does mine.

And lastly, let me present to you this prayerful welcome from the FSSP,

We ask all of our supporters to join with us in continually offering daily prayer and sacrifice that his pontificate may occasion the increase of faith, hope and charity throughout the Church, and the world.

May Pope Francis be filled with the courage and fortitude needed to steer the Barque of Peter amid the turbulent seas and rough winds in which we find ourselves, for the Psalmist tells us, “He that dwelleth in the aid of the most High, shall abide under the protection of the God of Jacob. He shall say to the Lord: Thou art my protector, and my refuge: my God, in him will I trust. For He hath delivered me from the snare of the hunters: and from the sharp word.” ~ Psalm 90:1-4

We beseech Our Lord Jesus Christ, Head of His Mystical Body, the Catholic Church, to increase the love of the Deposit of Faith and our sacred traditions amongst the episcopacy, clergy, religious and laity, so that through the shepherding hand of Pope Francis, the Divine assistance will remain with us, that we might witness the triumph of the Immaculate Heart of Mary and continue to restore all things in Christ.

March 16, 2013 Cardinal Mahony, Suddenly an Authority on Examples of Humility...
Recent Comments
0 | Leave a Comment
"Pithy and so, so, true. If it were possible, I'd post a million of these ..."
Vicky Hernandez #whyIstayed Why Women Stay In Domestically ..."
"All the best to you, Katrina! We'll miss you. Thanks for sharing your journey with ..."
Lori Ten Years is a Long Run…
"Bon voyage on your new endeavours. And thank you."
Cordelia Ten Years is a Long Run…
"I will miss your unique, funny, honest voice. Thank you for all the years of ..."
Jim Vogel Ten Years is a Long Run…
Browse Our Archives
get the latest from
Catholic
Sign up for our newsletter
POPULAR AT PATHEOS Catholic
1