Cohabitation is a smack in the face …

… Working in real estate affords me a candid peek into different types of living arrangements, many of which are considered unconventional. You’d think I’d be used to some things having been in this business close to a decade. But I will never ever get used to the well meaning parents who casually co-sign for their children to cohabitate with their significant others. That, that right there blows my mind.

I cannot even begin to count the number of bright young girls who’ve sat at this desk across from me dumbly smiling because they believe they’re taking their relationship to the “next level”. As a former dumb girl, their naivete I can excuse. The parents, on the other hand, should know better. Should expect better.

What in the world compels a parent, who’s supposed to have their child’s best interest in mind, to not only allow such a potentially destructive living situation to exist but to literally hand them the keys to do so?

Parents, you can tell your kids “no”. In fact it’s prudent to do so frequently. It’s also ok, parents, if your kids get mad at you. I promise they will speak to you again, especially when they need something… the little beggars. What’s that you say? They are over 18 and will do what they want to and you’re powerless to stop them. True. Sort of. If they are hell bent on playing house you most certainly are under no obligation to help them along the way. You don’t have to pay their rent or give them an allowance or help them get a lease when they don’t qualify on their own.

I see these parents come in with their children and their children’s lovers and act like them living together is the most natural thing in the world. And 9 times out of 10 in a few short months one of them will be at my desk crying to break the lease because the other was a jerk face. Or someone ends up pregnant. Or quits school. And all manner of completely avoidable drama.

Then I become the bad guy when all parties are stuck in the legally binding lease agreement that just a few months ago everybody was all hunkey-dory to sign.

Lookit… young ladies. Moving in your boyfriend is not the “next level”. It does not guarantee an engagement ring in the near future. In fact, it typically has the opposite effect. And those couples that do go on to get married have a higher divorce rate than those who didn’t live together before marriage.

And this crap I keep hearing that you can’t really know someone till you live with them first, like a trial marriage, is ludicrous. That needs to stop right now. Do you hear yourself? Why on earth would you entertain the idea of marriage with someone you don’t fully trust? You don’t really trust them now do you; or why else would you make living together before marriage, just to see how things go, a prerequisite. If a man asks you to move in with him the proper response is to be horrified and insulted. Parents too. Completely horrified and insulted.

Cohabitation is a smack in the face and if a girl is too much in loooooove to see that it becomes the parent’s immediate responsibility to plainly say so.

I swear. Some days you just want to shake people.

May 10, 2013 Leaving Comments and Other Technical Things...
Recent Comments
0 | Leave a Comment
"Pithy and so, so, true. If it were possible, I'd post a million of these ..."
Vicky Hernandez #whyIstayed Why Women Stay In Domestically ..."
"All the best to you, Katrina! We'll miss you. Thanks for sharing your journey with ..."
Lori Ten Years is a Long Run…
"Bon voyage on your new endeavours. And thank you."
Cordelia Ten Years is a Long Run…
"I will miss your unique, funny, honest voice. Thank you for all the years of ..."
Jim Vogel Ten Years is a Long Run…
Browse Our Archives
Related posts from The Crescat 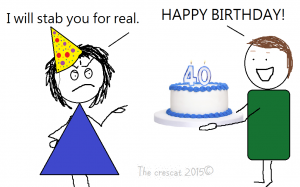 Catholic
Approach with caution...
The Crescat 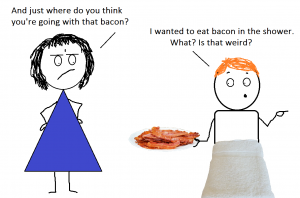 Catholic
Of Boys and Bacon...
The Crescat
TRENDING AT PATHEOS Catholic