Can’t a girl even walk down the street anymore…

Can’t a girl even walk down the street anymore… April 23, 2015 Katrina Fernandez

… I totally lost my shit today.

I was walking to my car after work when I passed a young lady walking her dog – not an uncommon occurrence since my office is in a semi-residential neighborhood with a lot of foot traffic.

What was uncommon about this incident was that this particular woman was also being sexually harassed by a man standing on the corner obscenely gesturing and yelling sexually explicit comments directed at her.

She kept her head down and walked faster but it looked like he was going to follow her. I completely lost my shit and stormed toward him, wildly swinging my purse and yelling, “leave her alone. Can’t you see she just wants to walk her dog. She’s has a right to walk down the street unmolested. Now go. Shoo!”

Yes, I shooed him. 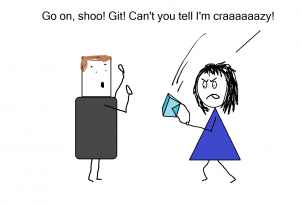 I lost it because I can’t even tell you how many times I’ve tried to do something as simple as walk down the street and was greeted with a barrage of unwelcome comments. Why the hell can’t people just walk down the damn street and be left the hell alone?!? It’s infuriating.

Seeing that poor girl harassed like that brought it all back.

When I was thin and played rugby, my old roommate and I would go jogging. We could be in ugly old sweatpants and people would shout at us from their cars and blow their horns. Disgusting things.

You’d think being fat and not as attractive would quell the attention and make me invisible. Nope. Instead of whistles and “hey baby lemme ride that ass”, I now get “move you’re fat ass out of the street, cow.”

If you’re a woman walking down the street you can’t fucking win.

Looks like I’m going have to start carrying mace. 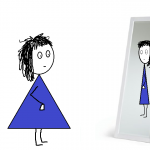 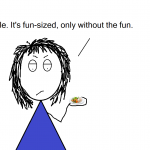 April 24, 2015 So far, so good. A diet update ...
Recent Comments
0 | Leave a Comment
Browse Our Archives
get the latest from
Catholic
Sign up for our newsletter
POPULAR AT PATHEOS Catholic
1