There isn’t a week that goes by where someone doesn’t call me a racist. Why? Because I actually did or said something racist? No. Simply because the person claiming racial discrimination didn’t get their way. I mean that’s what it has to be right, since everyone is entitled to everything always? If I don’t give them their way than I have somehow infringed on their right to get their way, ergo racist.

I work in real estate, in the rental housing market. When a homeowner entrusts me with the proper care and handling of their invest property my duty is to protect their invest by finding a qualified renter to lease their home. Qualifications are determined by Federal Fair Housing Laws and the state’s realtor association.

When someone comes to me looking for housing and they are a twice convicted felon, a registered sex offender, and are currently under eviction and haven’t paid their rent in three months chances are they’re going to have a very hard time finding housing not because of their ethnicity or national origin but because they haven’t been able to prove themselves to be responsible renters.

Black, white, green, orange, male, female, straight, gay, young or old, under those circumstances no one is going to trust you with the keys to someone else’s car much less an entire house!

I wish people would take responsibility for their own shitty credit or criminal background issues instead of automatically accusing the world of conspiring against them because of the color of their skin, gender, or their age.

But to examine where you are today and how you got there would be to acknowledge the poor choices made along the way, and personal responsibility and integrity is currently not in vogue. However, victimology is the height of fashion.

Women, you are embarrassing yourselves running around crying “triggered” over every little thing, carrying mattresses across campus, accusing everything of encouraging a culture of rape and everyone of harassment.

I’m almost sorry for my son who, in a few short years, will have to navigate the seas of your emotional instability and crazy. I don’t envy any college aged young man having to deal with young feminist women, who in my opinion are the most vindictive vicious sort.

Twice in my life I have been dragged into a cases of fake rape, where friends (now ex-friends) decided to ruin their boyfriends’ lives. The first was in my early twenties when a girl I knew decided to accuse her boyfriend of rape because she thought he cheated on her. In retaliation she set about to ruin his reputation and in return she was heaped with sympathy for her plight and praise for her bravery to speak out. Eventually she was discovered to be a liar but she just blamed a traumatic childhood for her actions and everyone agreed she’d suffered enough. No one cared about the young man’s reputation.

The second account actually involved the police. A friend wanted to go out for drinks to cheer herself up after being dumped by her boyfriend. She proceeded to drink too much and picked up some random guy at the bar. She went to a hotel with him and I went home. Later that evening she had him drive her back to my apartment so she could pick up her car. After he drove off she came in and proceeded to tell me all about her night – she got his number, he was cute, a good kisser and so forth to ad nauseum. Then she went home.

A few days later the police showed up at my job to question me about my friend’s “rape.” Apparently she went to the police and accused the guy from the bar of drugging and raping her. In doing so she hoped her ex-boyfriend would rush to her aid and then they’d get back together and live happily ever after. Only my testimony of the night’s events ruined that. Eventually the accused man was found innocent, obviously, but I never learned what happened to my friend. We stopped speaking immediately after those events.

Women want to be respected and treated equally but behave, in general, in a manner that commands the complete opposite.

Gays can now legally get married in every state in the U.S. This is the end of civilization and the establishment of marriage as we know it! 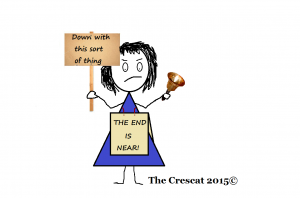 No. We ruined marriage ourselves decades ago. I’ll use myself as an example and admit my own role in the devaluation of the institution.

I got married because I found myself pregnant. Neither of us wanted to be married but we both thought “what the hell, worse case scenario divorce.” A few years later we were, unsurprisingly, divorced.

There were a lot of other things going on behind the scenes that led to our divorce but I think it important to note our attitude when we took our vows – that common held attitude that if things get too shitty we can always call it quits. In short, a lack of commitment from the start.

Marriage hasn’t meant anything to a good majority of the population for a very long time. We can divorce our spouses for simply being bored of their face and yet we have the righteous indignation to defend the institution from the “threat” of gay marriage.

It also doesn’t matter who perceives which group to be more sexually promiscuous or less monogamous. Faithful partners and outright whores can be found in both communities. The argument for or against can’t be made there.

Unless we are willing to publicly and legally admonish the ease in which we can get divorced and take an honest look at how we contributed to the culture of divorce and destruction of marriage ourselves there’s not much we can say with any ounce of intellectual honesty.

No, my concern lays more with the aggressive push to make everyone “bake that fucking cake or else.” It’s a dangerous hive mind think where any deviation is deemed bigoted hate punishable by law. A few days after the legalization of same-sex marriage calls came for the end of tax exemptions for religious institutions and the ACLU will no longer defend the Religious Freedom Restoration Act.

With every passing day it becomes clear that this was less about equality for all and more an opportunity to oppress religious groups and criminally persecute anyone who deviates from the new norm. Liberals, gay and straight alike, have been gleeful in watching the Church get what they think She deserves for teaching against sin.

I’m disgusted with it all and I think everyone has lost their damn minds.

July 4, 2015 Of Boys and Bacon...
Recent Comments
0 | Leave a Comment
Browse Our Archives
get the latest from
Catholic
Sign up for our newsletter
POPULAR AT PATHEOS Catholic
1