Junger’s Hunger, And Ours

A couple of years ago, I took some members of a large Rwandan refugee family to a St. Vincent de Paul store nearby. I was accompanied by a Rwandan friend and translator, Jeanette Akimiyimana, herself a refugee who has been in the United States for ten years. As we pulled away from the triple decker where the family had been placed, Jeanette began to chat with one of the teenaged girls in Kinyarwanda, the principal language of Rwanda. Before long they were laughing and the pace of conversation had reached breakneck speed. “What did you say?” I asked Jeanette. “I asked her if she was depressed yet,” she replied, laughing. “Everyone who comes here from Africa gets depressed.”

Jeanette went on to point out that American society is characterized by detachment from extended family, community, culture, and all the other things that contribute to identity in more “primitive” societies. “It’s all about money in America,” she said. “Everyone is an individual. Everyone is on their own. People don’t matter. That makes you depressed.”

I thought about Jeanette’s insight today while listening to an NPR interview with Sebastian Junger, of The Perfect Storm and Restrepo fame. His newest book, Tribe: On Homecoming and Belonging, is about the difficulties soldiers have reintegrating back into American civilian life following wartime service. Junger, who studied cultural anthropology at Wesleyan, locates this difficulty in the loss of a shared identity, a meaningful collective mission, a unifying set of beliefs and goals. In short, the loss of community, or as my friend Jeanette put it: “Everyone is on their own.”

Listen to Junger’s interview with On Point host Tom Ashbrook

Junger uses uses soldiers as a lens, but Tribe isn’t really about the military at all. Rather, it’s a critique of American society, which by its very nature fails to provide returning soldiers with what they loved best about military life. And it isn’t just a military phenomenon; Junger notes that returning Peace Corps volunteers often have the same experience. Whether soldier or peace worker, the return to the United States is very often an occasion for psychological fragmentation, depression, and sometimes suicide. Junger says that this is the price we have agreed to pay for the wonderful benefits of “civilization,” which we increasingly define in purely material and technological terms.

This absence of community and the crisis of identity it spawns is in my view the ground for our toxic culture of depression, drug abuse, pornography, and other forms of escapism. It accounts for everything from widespread gender dysphoria, a feature in the decadent stage of every civilization, to the longing to “make America great again,” and even the popularity of tattoos, especially among the young. (James Howard Kunstler has written, “Tattooing has traditionally been a marginal activity among civilized people, the calling card of cannibals, sailors, and whores. The appropriate place for it is on the margins, in the back alleys, the skid rows. The mainstreaming of tattoos (on Main Street) is a harbinger of social dysfunction.”)

For his part, Junger has long hungered for a deeper, more fulfilling connection to community than what he experienced growing up in the small town of Belmont, Massachusetts, which has the distinction of being both the official residence of Mitt Romney and the birthplace of the John Birch Society. Junger begins Tribe this way:

The sheer predictability of life in an American suburb left me hoping — somewhat irresponsibly — for a hurricane or a tornado or something that would require us to all band together to survive. Something that would make us feel like a tribe. What I wanted wasn’t destruction and mayhem  but the opposite: solidarity. I wanted the chance to prove my worth to my community and my peers, but I lived in a time and a place where nothing dangerous ever really happened. Surely this was new in the human experience, I thought. How do you become an adult in a society that doesn’t ask for sacrifice? How do you become a man in a world that doesn’t require courage?

Of course, communal identity and shared purpose don’t guarantee peace, and social solidarity is often purchased at the expense of the scapegoat, the victim. In American culture, the word “courage” is often invested with a martial meaning and “sacrifice” associated with war. Which is why only an authentically Christian community, one characterized by nonviolence, love, service, hospitality, and generosity of spirit can satisfy the “long loneliness” we all experience. Such a community is an icon, a foretaste of the Kingdom of God, our true home and desire. 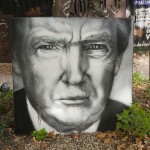 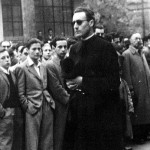 May 30, 2016 A Saint for a New Socioeconomic Order
Recent Comments
0 | Leave a Comment
Browse Our Archives
Follow Us!

I Read the Whole Bible in...
The Cordial Catholic
Related posts from The Dorothy Option 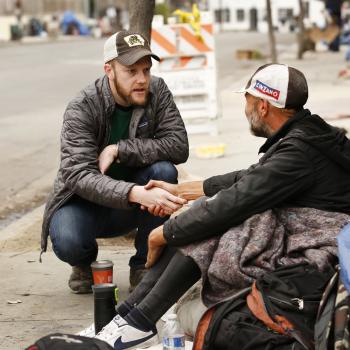 Catholic
Friendship with the Poor
The Dorothy Option 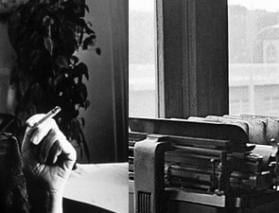 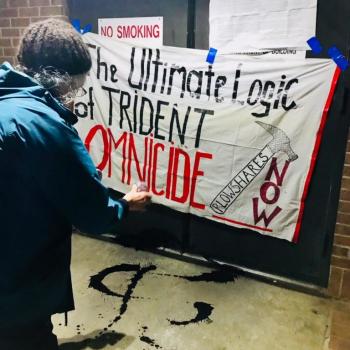 Reply to Unfair Criticisms of Trump Re Coronavirus
These replies, amounting eventually to a general and multi-faceted defense, started when...

When Quarantined, Give Your Heart Generously: A Conversation...
Fr. Patrick (Paddy) Gilger SJ is a Jesuit priest of the Midwest...
view all Catholic blogs
What Are Your Thoughts?leave a comment
Copyright 2008-2020, Patheos. All rights reserved.