Why You Should Read (and Listen to) Sam Rocha

Not long after Pope Francis’ election in 2013, we friends around Solidarity Hall began to sense that some of our fellow Catholics were just not getting this new Argentinian guy. We decided to collect some essays, partly “translating” Francis for an American audience and also speculating on how we saw the coming years of his papacy. Somewhere I had heard of a youngish but talented Patheos Channel blogger, Sam Rocha, and we asked him to contribute something.

Sam obligingly sent us an essay entitled “Could the Preferential Option for the Poor End the Abortion Wars?” It was a challenge to both sides of the conventional debate to realize they are violating the preferential option for the poor “in an extreme way…, pitting the widow against the orphan, the woman against the child, and vice versa.” Regardless of who “wins”, Rocha pointed out, the root causes will remain untouched–“a sin against hope.”

Not long after we published the collection, Sam sent me a PDF of his new book, A Primer for Philosophy and Education. I didn’t have time to give it much more than a glance so I didn’t realize this short essay was bubbling with themes from Paolo Freire, Ivan Illich and his late Grandfather Rocha, “a master storyteller.”

Still, none of this prepared us for Sam’s next venture, a music CD dedicated to Augustine’s Confessions and entitled “Late to Love.” I’m sure by now Sam has a certain group of fans who couldn’t care less about his writing: they just want more music like this album, a folk/funk/jazz experiment in re-imagining an ancient soul with new soulfulness.

Lest the evidence of these diverse talents suggest that Sam (whom I somehow can’t help but refer to by his first name) is not a serious guy, take and read (as Augustine would have said, “tolle et lege”) his Folk Phenomenology, subtitled “Education, Study and the Human Person”, an essay arguing that art precedes metaphysics, amidst various reflections on the mystery of education, the eros of study and “Education After the Death of School.”

If the latter book sounds a tad strenuous (Sam is not afraid to riff alternately on thinkers like Heidegger and Foucault, among other such heavies), then by all means start with his Tell Them Something Beautiful, a highly approachable collection of essays, blog posts and talks, including an interview with Sam by Max Lindenman (who wrote the foreword). Along with pieces on the failures of liberalism, the likelihood of a Trump presidency (written in 2011!), the Great Books, Pope Francis’ “gangsta ways”, Jean-Luc Marion and Maya Angelou, a final section is dedicated to the notion of “funk phenomenology,” a concept which must somehow be related to the folk phenomenology of Sam’s other book, although Sam doesn’t elaborate here.

Finally, I will suggest that funk phenomenology, in my reading at least, is a kind of extended exploration of the theology of the body–or at least, of embodiedness–in an approach that strikes me as an expression of an American (or Latino) version of liberation theology in its latest, Benedict XVI-approved, non-Marxist formulation. I’m also thinking here of the writings of Latin American theologians influential on the thinking of Pope Francis, especially Fr. Juan Carlos Scannone (Argentinian) and Alberto Methol Ferré (Uruguayan). These thinkers represent this new wave of liberation theology, one which includes a teología del pueblo, a theology of the people grounded in popular piety and devotions.

Ready or not, we American Catholics now belong to a church whose source is now the global South, especially Latin America. And while Sam is a native “Texican” by origins, I think his work in several ways points us in this same southerly direction. 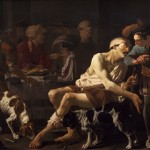 July 14, 2017 Does God Love the Poor More Than the Rich?
Recent Comments
0 | Leave a Comment
Browse Our Archives
get the latest from
Catholic
Sign up for our newsletter
POPULAR AT PATHEOS Catholic
1