At the May 21, 1972 commencement exercises at the University of Notre Dame, Dorothy Day was in attendance in order to receive that year’s Laetare Medal. On the stage with her, as it happened, in order to receive an honorary Doctor of Law degree, was another great figure of the twentieth century, philosopher Hannah Arendt.

Fr. Ted Hesburgh, then president of the university, remarked to Robert Coles (also there for an honorary degree) that “the two ladies were like old friends, … just totally absorbed in one another. It was so moving! … I looked at the two of them — huddled, leaning into each other, talking, remembering. And so affectionate … It was so beautiful. They are the incarnations of intelligent goodness and generous intelligence, Mary and Martha, the sisters of Bethany.”

Another witness to their meeting was the German theologian Dorothee Sölle who was lecturing at Notre Dame at the same time. She described the encounter of these “two extraordinary women of the 20th century, … both beautiful in the wisdom of advanced age, both engaged for the rights of all human beings.”

I recently discovered this extraordinary encounter from a scholarly article a friend sent to me. I had no idea these two remarkable women — both heroes here at Solidarity Hall — ever met. Moreover, their on-stage conversation was not their first meeting.

Among Dorothy Day’s papers is a short letter from Hannah Arendt dated December 26, 1965:

Thank you for your note. This only to tell you that I followed your work for many years full of admiration and affectionate sympathy.

With all best wishes for Christmas and the New Year.

But Arendt, the political theorist, did not merely follow Day, the political activist, in New York. In three areas, Arendt was drawn into or overlapped with the Catholic Worker’s activities: 1) charitable and social work for the persecuted; anti-war actions; and the fight against totalitarian tendencies. In fact, Arendt, normally not thought of as an activist, turns out to have been under FBI surveillance for decades.

Aside from the newspaper coverage of the Catholic Worker movement, Arendt had two other connections to the group in her personal circle: writer Dwight Macdonald and poet W.H. Auden. (Mary McCarthy is a possible third.) For example, Day was a sponsoring member of Spanish Refugee Aide, an organization McCarthy and later Arendt chaired. Macdonald and Day were frequent correspondents, and he wrote two appreciative articles about her.

In 1956, Day was imprisoned for participating in protests against New York City housing discrimination, after which it was W.H. Auden who paid her $250 bail. Auden also attended Catholic Worker meetings and participated in their discussion groups.

When Arendt’s husband, Heinrich Blücher, died in 1970, Arendt donated his clothing to the Catholic Worker settlement house in New York. Following the Notre Dame meeting in 1972, Arendt donated $1,000 to the Catholic Workers, prompted an enthusiastic letter of thanks from Day, who added “really $1,000 is going to repair a lot of plumbing, and buy two new showers for our so many young people.”

In 1973, Arendt gave one (possibly two) lectures at St. Joseph’s House, the main Worker house in New York at that time. Her topic was “Revolution,” as per Day’s personal request. In her diary entries around this time, Day describes Arendt as one of the “brilliant and noble women these days.”

During the Vietnam War, a group called “The Resistance” came together to protest in various ways, including by returning draft cards, an action made a crime by a 1965 Federal law and thus a form of civil disobedience. The group included Arendt (who donated, making her an accomplice under the law), Dorothy Day, Mircea Eliade, Erich Fromm, Viktor Frankl, and Daniel and Philip Berrigan, two priests associated with the Catholic Worker who were later tied and imprisoned for their anti-war protests.

Arendt did differ from Day on some issues, notably pacifism. Upon receiving an invitation from Dwight Macdonald in 1973 to join the War Resisters League — an international pacifist organization which had given their Peace Award to Dorothy Day in 1963 — Arendt replied:

I hate to say ‘no’ to you but I feel I cannot join the War Resisters League. I am not a Pacifist either in the ‘relative’ or the ‘absolute’ sense and I am not sure that I would ‘refuse to support any kind of war,’ as you put it. You know of course that I supported the war against Hitler rather enthusiastically. Today, evidently, one could not support any war between the great powers because of nuclear weapons … Pacifism, at any rate, is not likely to save us.

Interestingly, these opinions did not prevent Arendt from supporting the Fellowship of Reconciliation, an offshoot of the Catholic Worker, and a number of other pacifist groups. As she wrote in her essay, “Reflections on Violence,” she would not endorse violence as a means to end the Vietnam (or any other) war. Violence, she believed, could only destroy power, never create it.

Finally, as the authors of the article sourced here put it, Arendt “was fond of people who were active in causes she supported, whose personalities she trusted, and who did what she knew or meant to know she could never have done herself. Hence her affection for Dorothy Day, Dwight and Nancy Macdonald, Albert Camus and his wife Francine Faure, her husband Heinrich Blucher and all those political actors whom she both admired from afar and at time joined and acted with in concert.” 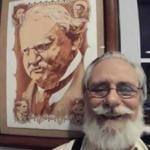 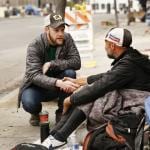 December 2, 2019 Friendship with the Poor
Recent Comments
0 | Leave a Comment
Browse Our Archives
get the latest from
Catholic
Sign up for our newsletter
POPULAR AT PATHEOS Catholic
1

The Dangers Coming From the 2021...
A Little Bit of Nothing
Related posts from The Dorothy Option