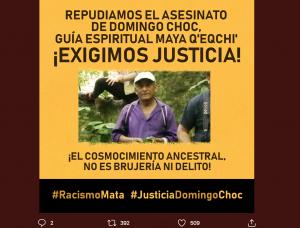 It’s Brazil that’s been in the news recently for the persecution of practitioners of the Afro-Brazilian religions of Candomble and Umbanda at the hands of Pentecostal gangs who issue death threats to devotional leaders in an effort to expel them from their urban turf, especially in Rio de Janeiro. The latest victim of Pentecostal persecution in Latin America, however, is not in the nation with the largest absolute Pentecostal population on earth, Brazil, but in the one with largest relative one – Guatemala.

On June 6 Domingo Choc, a Mayan spiritual guide and herbalist was abducted from a relative’s home by a mob of enraged Pentecostal villagers who accused him of performing witchcraft at the grave of a recently deceased resident. The prominent spiritual guide and researcher who had collaborated with European universities studying Mayan pharmacology was tortured for ten hours before being horrifically doused with gasoline and burned alive while cell phone cameras captured it all. His shocking murder for witchcraft has led to international condemnations of religious intolerance and support for Indigenous spirituality. His death is also a great loss culturally to Indigenous people who make up over 40% of the population of Guatemala as Choc was a font of Mayan ancestral knowledge.

Those unfamiliar with the contemporary Latin American religious landscape might assume that the persecution of Indigenous and African-diasporic religious traditions ended with Spanish and Portuguese colonial rule some two centuries ago for most countries. The new nations, however, retained Catholicism as the official state religion and the religious practices of Indigenous peoples and those of African descent continued to be outlawed and persecuted, albeit with less zeal than during the colonial era. In Brazil, home to the world’s second largest Black population after Nigeria, Afro-Brazilian religions, most importantly Umbanda and Candomble, were only legalized in the 1960s. In a similar vein Vodou, the faith that inspired the massive slave revolt that culminated in Haitian independence from France in 1804, wasn’t granted legal recognition as a religion until 2003!

The latest persecution of Non-Christian religions, however, has mostly been led by Pentecostals in the region. Since the 1970s this type of charismatic Evangelical Protestantism has been spreading like wildfire across Latin America to the point that a number of countries, such as Brazil, Guatemala, and the Dominican Republic, are no longer Catholic majority. This, of course, was one of the main reasons that a Latin American cardinal was elected pope, to stanch the hemorrhaging of members from the Church in the region that is home to 39% of the world’s Catholics.

The Pentecostals currently terrorising practitioners of Indigenous and African-diasporic spirituality have re-appropriated age-old Christian ideals that were imported by missionaries during the colonial era. Adhering to a Manichean view of the world, literally as a battle between god and the good Christian versus satan and the evil heathen, they see all other religions as demonic. When Iberian explorers first arrived in the New World soil, they brought with them a male-centered monotheistic, exclusive religion: Roman Catholicism. It stood in stark contrast to Indigenous spirituality, and the African-diasporic faiths that emerged syncretically from the concrescence of New World and Old World religious creeds.

The former faiths are polytheistic, feature deities of both sexes and generally do not have the same moral prescriptions as Christian credo. Colonial archives record how missionaries labelled Indigenous faiths as satanic and treated their goddesses and gods as demonic, forcing the native people to apostatize and convert to Christianity, often on pain of death. In a letter dated November 30, 1537, to the Spanish king, the bishops of Mexico and Guatemala begged for authorization to employ rigorous measures against idolatry. Nevertheless,despite drastic measures many non-Christians continued their religious practices in secret into the era of independence.

Tragically, today practitioners of these faiths in the post-colony are still not free to embrace their spirituality. Pentecostal persecution of non-Christian spirituality has become rampant, especially as Evangelicals emboldened in both Brazil and Guatemala by conservative presidents who are staunch allies of their community and support their views on issues such as same-sex marriage and are indifferent towards Indigenous issues. Gangs in Brazil position themselves as ‘soldiers of Jesus’ while the Guatemalans who murdered Domingo Choc adhere to stigmatizing biases that have their roots in colonial beliefs.

According to the Guatemalan press, in the past couple of years at least 20 Indigenous people have been murdered related to accusations of “witchcraft.” Across Latin America, since independence, governments have consistently failed to protect the rights and safeguard the traditions of Indigenous peoples. Sadly the murder of Domingo Choc is part of a pattern of discrimination, racism and neo-colonial violence towards Indigenous people and their culture.

*Dr. Kate Kingsbury obtained her doctorate in anthropology at the University of Oxford and is author of the forthcoming “Daughters of Death: The Female Followers of Santa Muerte” with Oxford University Press. She is a polymath interested in exploring the intersections between anthropology, religious studies, philosophy, sociology and critical theory. Dr. Kingsbury is Adjunct Professor at the University of Alberta, Canada. She is fascinated by religious phenomena, not only in terms of their continuity across the Holocene and into the Anthropocene but equally interested in the changes wrought to praxis and belief by humans ensuring the infinite esemplasticity that is inherent to all religions, allowing for their inception, survival, alteration, regeneration and expansion across time and space. Dr. Kingsbury is a staunch believer in equal rights and the power of education to ameliorate global disparities. She also works pro bono for a non profit organisation that aims to empower and educate girls in Uganda. 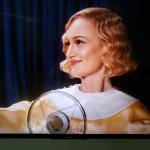 May 4, 2020
Supernatural Sorority - The Religious Feminism of Penny Dreadful: City of Angels
Next Post 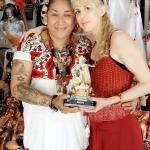 June 28, 2020 Dr. Kate Kingsbury Pens Foreword to Turkish Edition of "Devoted to Death: Santa Muerte, the Skeleton Saint"
Recent Comments
0 | Leave a Comment
"If you are already out of your mind, what difference is way out of your ..."
RajunCajun Mushroom Mysticism and the Paschal Mystery
"Thank you for the piece. On my own Patheos blog, Messy Inspirations, I have discussed ..."
Fellow Dying Inmate Mushroom Mysticism and the Paschal Mystery
"Based on the general state of the world as I perceive it I am surprised ..."
Bob Shiloh 2020 Census Reveals Catholic Decline and ..."
"A common explanation given for the decline of the numbers of practicing Catholics in Latin ..."
Cbalducc 2020 Census Reveals Catholic Decline and ..."
Browse Our Archives
get the latest from
The Global Catholic Review
Sign up for our newsletter
POPULAR AT PATHEOS Catholic
1