Dad Said I Could 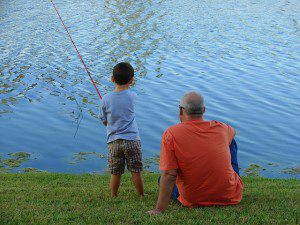 With the confetti hardly swept from the floor, my grandfather lost the family business. “Celebrating 75 Years,” the photo read, with Grandpa, Great-Grandpa, and Great-great-Grandpa standing tall for the camera. We were the Lowe’s of little town. But soured relationships and a spoiled inheritor buckled its knees.

What does it take to receive the baton from Dad—or Mom? How many enter their young professional careers with a plan to take on what their parents built? How many even want to?

These questions came up recently when I talked with Geoff Ginader, a Young Professionals coach here at The High Calling and the president of American Hollow Boring Company (AHB). Geoff is 38, and the 4th generation to run AHB.

According to the Family Business Institute, only 3% of family businesses make it this far, putting AHB in an elite category of successful multiple-generation businesses—even as it isn’t well-known like the monolithic Wal-mart, or the enduring Zildjian Cymbal Company, an operation so old (1623) that it is currently run by the 15th generation.

Imagine the pressure on Zildjian’s 16th generation! I assume it would be great. But our business never made it to me, so I wouldn’t know. For Geoff, however—patient and level-headed—there didn’t seem to be much pressure at all.

Geoff graduated as an industrial engineer and worked two years in a large corporation. Looking for advice one day about where to go next, he called his dad. Geoff was 23.

“My dad has always loved the business and hoped we would want to help continue it. But he wanted me to follow my interests. When I called, he said it was a good time to get started at AHB because two guys in management were retiring. I had to decide how going back home was making progress.”

Two points struck me here. First, whatever pressure Geoff felt regarding regress was not from his father (a good sign). Second, he was offered a management role—unlike his dad, who started as a laborer before working his way to the top. When I inquired about the response the shop guys had to a “kid” joining above them, Geoff showed no history of pressure there either, as his humility demonstrates:

“I get dirty when projects require it. Machine operators welcome me at the controls when we work together.”

It helps that Geoff has a good relationship with his father, too (and his sister, who is CFO). “It’s always been good,” he says.

“Before my dad retired, he had a very hands-off management style, meaning he would get good people in place and let them work to the best of their abilities. He did the same with me. We talked more about technical matters than about performance, for example. When I did ask him for advice, he usually had pretty good answers.”

He added, “Dad still visits the shop on Wednesdays, which I always look forward to.”

This relational health—with his dad and with employees—as well as the hands-off management style modeled for him, developed the kind of support Geoff needed to take over as president five years ago, at age 33. He felt confident to grow the company, adhering to tested principles and tradition, while adding what he felt was “more direction and drive.” Then the economy tanked, putting a stop not only to record sales and profits, but to business in general.

If only 3% make it this far down the family line, I wondered what has kept Geoff from losing it, either from economic threats, or worse, like my grandfather did.

Adrianna Gardella, in The New York Times, identifies “a few traits that the survivors seem to share:

Perhaps you are next in line to run the family business. Dad has had “the talk” with you, or you simply feel pressure to carry the legacy forward. These traits have something to offer. In Geoff’s story, all four are present.

For instance, a significant response to AHB’s losses in 2008-09 was the pursuit of innovation. The “willingness to reinvent” ended up providing a boost of security and profitability. Second, though Geoff was offered a management position, it marked the first of three to get where he is today. It wasn’t handed to him; he had to prove that he was the right fit. Third, Geoff’s attitude coming into the company was informed by a vision greater than himself. He saw it in the way another family business sees it: “We don’t inherit the business from our parents, we borrow it from our children.”

And fourth among this list of successful traits, Geoff has sought outside help. He offered a bit of advice to those of you with the family business in your future:

“Find others in similar situations and form a family business peer group. The goal is to build up one another and act as a special resource. Mine has been invaluable in providing me with perspective and challenge.”

There is one more trait that Geoff possesses, something so foundational that it is almost second nature to him. Geoff’s faith in Christ turns biblical knowledge into practical leadership. He puts it simply:

“I work to the best of my abilities. I use teachings from my faith to inform both daily work and also big decisions. I try to treat people fairly and work to make the business attractive to employees and vendors and especially our customers. This is my calling.”

Image by Patricia Hunter. Used with permission. Sourced via Flickr. Geoff Ginader is a YP coach with The High Calling. Connect with Geoff through his profile here. Interview by Sam Van Eman, Young Professionals editor and narrator of A Beautiful Trench It Was. Originally shared at TheHighCalling.org.

August 13, 2015
Figuring Out Success With the Amish
Next Post

August 20, 2015 Leaving a Creative Legacy
Recent Comments
0 | Leave a Comment
Browse Our Archives
get the latest from
Best of Patheos
Sign up for our newsletter
POPULAR AT PATHEOS Faith and Work
1

Stephen the deacon was martyred by...
Charting Church Leadership
Related posts from The High Calling