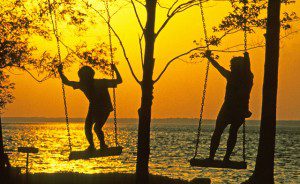 On my mother’s side, I come from a long line of “creatives.” Which is a nice way of saying our family is a little whacked-out.

My great-grandfather Pappy wrote many unpublished short stories. His daughter Nanaw was an artist and writer as well as an art teacher. Her husband Dadaw was an amateur inventor and held several patents before he died. And my mother is a talented stained glass artist, children’s music teacher, and decorator.

Each of my late relatives lived life with panache and turned ordinary moments into memorable experiences. Pappy allowed his pet parakeet to drink coffee out of his cup in the mornings. Nanaw and Dadaw danced to the Muzak in the grocery store, much to my mother’s chagrin. While they waltzed around the frozen food, she hid behind the stacks of canned goods, praying no one would see her. Their defense? “We can’t let this good music go to waste!”

Once, the stories embarrassed me. Then they amused me. Now they inspire me. In fact, a Dyer family motto is “Why be normal? It’s so boring.” I long for my kids to carve their own paths, instead of following in the footsteps others have forged. I’m grateful that my husband, a professional musician, shares my philosophy of parenting, and I’m also extremely thankful for grandparents and teachers who’ve come alongside us.

My younger son’s drama teacher, who took a break from the classroom for several years, told us, “The main difference I noticed when I came back was that the kids were much less creative. They didn’t know how to use their imaginations.” She attributed the change to a rise in electronics use, overscheduled families, and school curriculum which elevates standardized instruction over discovery-based learning.

I found that incredibly sad…and disturbing.

In our family, we love our computers, tablets, and smart phones as much as anyone (and they can be great tools for both discovery and expression), but we try to balance non-creative electronics use with active play. Often, creativity is as simple as changing a routine: “Put some music on while we clean.” It might mean instituting a silly family tradition: “Let’s go to Sonic for a cherry limeade—in our pajamas!” At times, it occurs organically—after the “b” word slips out. (My boys know that if they say, “I’m bored,” I will put them to work. So they create their own fun as a last resort, just to avoid chores.)

We’ve also arranged our family budget to include funds for art and music lessons, creative experiences, and supplies. It’s more important for us that our sons have memorable experiences than name-brand clothing. Of course, we don’t always get it “right,” and there are times when laziness or inertia sets in. For those days, I cling to God’s grace.

In the future, Jordan and Jackson might seek therapy for the way we’ve raised them. I’m okay with that, because since Adam and Eve, every family has been somewhat dysfunctional, and ours is no different. However, they might also thank us. I’m praying for that alternative.

Luci Shaw writes, “I’m convinced that the whole world is better when we, as individuals, capture and savor each moment as the gift that it is, embrace the challenge or joy of it…and thereby transform it with the magic of creative possibility.”

Image by Wisconsin Department of Natural Resources. Used with permission. Sourced via Flickr. Post by High Calling EditorDena Dyer. A version of this piece appears in Grace for the Race: Meditations for Busy Moms (Patheos Press). Dena’s newest book, Wounded Women of the Bible: Finding Hope when Life Hurts (Kregel), will be released in late August. Originally shared at TheHighCalling.org.

August 25, 2015 Tomorrow's Legacy Today: What Will the Children Remember?
Recent Comments
0 | Leave a Comment
"The modern IT market needs new solutions and new and new tasks every year. If ..."
John Wise What Technology Would You Take with ..."
"I'm a Human Resources professional, with 40 years in the field. I've been born again, ..."
Jay Sunderland Five Ways to be a Christian ..."
"Well the irony of your article certainly is fascinating. It seems Spurlock created a production ..."
Trevor Working for Free: Interning at the ..."
"If Jesus can't draw all men unto him, surely the alternate Savior, C.S. Lewis, can ..."
Father Thyme Serving God in the Business of ..."
Browse Our Archives
Related posts from The High Calling

Faith and Work
Dad Said I Could
The High Calling