The Feast of Augustine, First Archbishop of Canterbury

The Feast of Augustine, First Archbishop of Canterbury May 26, 2015 Porter Case Taylor 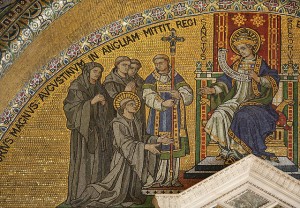 O Lord our God, by your Son Jesus Christ you called your apostles and sent them forth to preach the Gospel to the nations; We bless your holy Name for your servant Augustine, first Archbishop of Canterbury, whose labors in propagating your Church among the English people we commemorate today; and we pray that all whom you call and send may do your will, and bide your time, and see your glory; through Jesus Christ our Lord, who lives and reigns with you and the Holy Spirit, one God, for ever and ever. Amen.

The story of St. Augustine of Canterbury is at once joyous and slightly disappointing. It is truly a reminder that evangelism and prayer go hand in hand and that liturgy and mission are not opposites but two sides of the same coin. To truly commemorate Augustine on the day of his Feast—also the day of his death—we must properly place him within the history of the ecclesia Anglicana (the church in England) that both preceded and has long outlived him. When relaying the story of Augustine it is essential to remember that he did not bring Christianity or the church to Britain but rather joined with God who was already at work.

For it was as early as the year 47 AD, or perhaps the second century AD, that Christianity reached Britain through missionaries. Saints Patrick, Columba, Alban and others bore faithful witness to the gospel in their missionary work in Britain and the church grew without Roman intervention or participation. Bishop Restitutus of London is recorded as being present at a church council in Gaul in 314 AD. Celtic Christianity was alive and growing in Britain prior to the Gregorian Mission of the last sixth and early seventh centuries.

Before his missionary work, Augustine served as the prior of a monastery in Rome—one that had been previously offer seen by Pope Gregory—and it was from this context that he was sent. Augustine was commission by Pope Gregory the Great to travel to Britain and evangelize; in 597 AD, Augustine and his band of 40 monks landed in Kent. With the cross before them and the papal commissioning behind, the band of monks began to preach the Gospel with zeal and success.

The joy of Augustine’s story can be seen through his relationship with and conversion of King Ethelbert, who was baptized in 601. Ethelbert’s wife, Bertha, was a Christian and Augustine was allowed to preach the word of God to Britons without interruption or intervention. The Christians assembled in an old church and according to the Venerable Bede—whose Feast Day we celebrated yesterday—they gathered, “to sing the psalms, to pray, to say Mass, to preach, and to baptize. They were constantly at prayer; they fasted and kept vigils; they preached the word of life to whomsoever they could. They practiced what they preached, and were willing to endure any hardship, and even to die for the truth which they proclaimed.” Augustine operated out of his monastic (aesthetic) spirituality and evangelized Britain through preaching and worship.

The Archbishopric of Canterbury was therefore established and Augustine served as the first archbishop of that historic and prestigious see. However, Augustine was not able to unify the Christians in Britain. It would be another 60 years before a council of the Christians in Britain bore any real fruit. The ecclesia Anglicana continued to grow after Augustine’s archepiscopal ministry and we can count him among the many missionaries who preached the gospel there. The fruit of such preaching was the Church of England. I join my voice with Hooker, Jewel, Andrewes and others who have pointed to the continuity and continuation of British Christianity that gave birth to the Church of England because it was first and foremost the Church in England.

Augustine’s story causes me to pause and reflect on my own aesthetic spirituality and the Great Tradition of which I am a part. Our Anglican heritage is one of great missionary zeal, passionate preaching, and strong churchmanship. Augustine was by no means a failure in his ministry—he faithfully carried out the duties and tasks given him by the Pope—but he does need to be put in context. May we commemorate Augustine this day for the office he established, the line of gospel heralds and apostolic ministers he joined, and the already-existing British Christianity he helped to flourish.

I believe Augustine can serve as an exemplar for the church today. In an increasingly post-Christian culture our efforts for evangelism and discipleship need to shift. The Pew Report and other data suggest that nominal Christians are becoming “nones” after decades of thin discipleship and instruction. There does not need to be a false dichotomy between worship and preaching, between evangelism and discipleship, between liturgy and mission. Perhaps a rich and robust form of liturgical catechesis will help produce Christians who are fed by the Word and the Body and Blood of our Lord; perhaps we can embrace Augustine’s conviction that evangelism can take place through worship and spirituality. 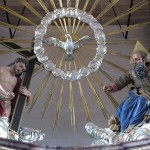 May 25, 2015
Worshipping the Unity: Sermon Notes for Trinity Sunday, Year B
Next Post 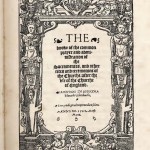 May 27, 2015 Celebrating the Feast of the First Book of Common Prayer, 1549
Recent Comments
0 | Leave a Comment
Browse Our Archives
get the latest from
Evangelical
Sign up for our newsletter
POPULAR AT PATHEOS Evangelical
1