Celebrating the Feast of the First Book of Common Prayer, 1549

Celebrating the Feast of the First Book of Common Prayer, 1549 May 27, 2015 Porter Case Taylor 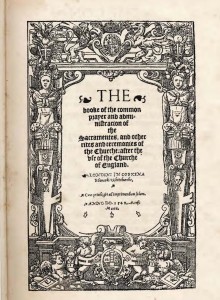 Almighty and everliving God, whose servant Thomas Cranmer, with others, restored the language of the people in the prayers of your Church: Make us always thankful for this heritage; and help us so to pray in the Spirit and with the understanding, that we may worthily magnify your holy Name; through Jesus Christ our Lord, who lives and reigns with you and the Holy Spirit, one God, for ever and ever. Amen.

The landscape of English Christianity in the fourteenth, fifteenth and sixteenth centuries before the Reformation, was deeply sacramental.[1]  Clergy and laity alike believed that God had not only created the natural order but that he participated freely within it through his own creation.  However, the abuses of the Magisterium—indulgences specifically—and a highly uneducated and neglected laity led away from sacramentality toward magic and superstition.  Many believed that sacramentals carried power and could be wielded in the spiritual battle, “The blessing of these ‘sacramentals’, as such sacred objects were called, put into lay control powerful spiritual weapons.”[2]  Objects became spiritual weapons in the hands of laypeople; the name of the Triune God was used as an incantation or charm against all sources of evil.[3]

It is therefore interesting that Calvin and Cranmer would insist upon the use of the Sursum Corda and the idea that partakers of the Eucharist were transported spiritually into God’s throne room where Jesus is locally present given that deeper sacramental understandings of the Eucharist and confession were ignored for spiritual and memorial views held by many continental Reformers.  The shift from sacramentality to rationality introduced the possibility of stripping Anglican spirituality of all meaning just as the altars themselves were stripped and the monasteries destroyed.[4]  James K.A. Smith playfully quips, “In rationalist worship spaces, even the wallpaper is didactic.”[5]

Furthermore, liturgical services were confusing and overwhelming in England prior to the compilation and introduction of the Book of Common Prayer in 1549.  The mass was said in Latin—a language that most churchgoers did not understand—up to six books were required for the mass, and a parishioner was a spectator rather than a participant within the liturgy.  Eamon Duffy believes that “participation” took place through watching but it was this very act of “watching-rather-than-acting”—almost waiting for something magical to take place—against which the Reformers reacted. Specifically the Reformers combated the ringing of the Sanctus Bell, the Latin phrase hoc est corpus meum (hocus pocus), and the gestures and ceremonies performed by the celebrant in the liturgy.[6]  Lay spirituality prior to the reformation(s) was highly visual and infused with a sense of magic rather than awe and wonder because Eucharistic piety was primarily a spectacle for the unlearned.[7]  While the Reformers sought to “break from traditional ways of thinking about the sacred”[8] by no means were the “Windsor committeemen…iconoclasts.”[9]

Operating within this spiritual and religious context, Thomas Cranmer began introducing the language of the people into the liturgical worship of the church.  Cranmer and Tyndale built from the foundation laid by John Wyclif some 130 years before.  This was a multi-step process and involved the 1539 printing of the Matthew Bible, the Litany printed in English in 1544, the Order for Communion in 1548 and finally the Book of Common Prayer in 1549.

The 1549 book was adapted from many sources in use at the time. It was often lamented that more time was spent during the service searching for the proper page than in actual worship. The Sarum Rite, as used in the Diocese of Salisbury, was perhaps the most important component. Other primary sources for Cranmer’s liturgical compilation included: Quinones’ Breviary, the Archbishop of Cologne’s Church Agenda, the Pie, the Gelasian Sacramentary, and Bucer’s Ordination Service (for the 1550 Ordinal) among others. Cranmer’s work should be labeled as both reform and return because he introduced new elements—chiefly his original collects—and yet he also returned to ancient practices and prayers of the early church.  Bard Thompson suggests four vital reasons for the introduction of the 1549 book: exposing people to the whole of Scripture, using English to reach the “hartes” of the English, simplifying the service, and creating uniformity within England.[10]

The Prayer Book included a Table and Calendar for lessons and Psalms, liturgies for Morning and Evening Prayer (Matins and Evensong), an Order for “The Supper of the Lord and Holy Communion, Commonly Called the Mass”, liturgies for baptism, confirmation, marriage, and burial, the visitation of the sick, and the churching (purification) of women after childbirth. In short, the 1549 Prayer Book was the first truly English liturgical book that offered in one place the forms, orders, and words for all of life’s circumstances.

Let us celebrate the 1549 Prayer Book for what it was and is rather than what it (arguably) was not. The 1549 Prayer Book was the first comprehensive book of liturgy printed in English and is part of the lasting legacy of the English Reformation. Cranmer compiled a prayer book that was at once both a continuation of the Great Tradition and an innovation in offering the liturgy in the language of the people. The 1549 Prayer Book represents one of two liturgical schools within Anglicanism (1549/1637 as one and 1552/1662 as the other) and is still approved for use (or adaptation) in Anglican provinces throughout the world. It was the fruit of ongoing liturgical reform and renewal within England that has given birth to countless liturgies over the last 500 years and can trace many of it’s prayers to the earliest centuries of the Church. We should rejoice with gratefulness in the work of Thomas Cranmer and his colleagues for the gift we have in this prayer book. May we continue to set our hearts and minds on Christ, and may we continue to worship him in the language of the people with our brothers and sisters worldwide to the glory of God!

A Word to (Anglican, Evangelical) Naysayers

In light of such a unique theological enterprise, while Archbishop Thomas Cranmer was the “creative compiler” of the 1549 and 1552 prayer books, a brilliant liturgiologist, and a liturgical “mastermind” his personal and private writings are a secondary source. Anglicanism is both creedal and liturgical and not confessional in nature, and it is expressed most fully in the Book of Common Prayer.  Before one can examine Cranmer’s writings or consider Cranmer’s theological formation and development, one must look directly at the texts of the two prayer books and there determine what is and is not being said.  An analysis of the Edwardian prayer books that is historically driven is insufficient because such an approach sees the liturgy as but one locus theologicus rather than as the locus theologicus par excellence.  Fr. Aidan Kavanagh pushes further when he suggests, “The point is that in first order matters, anonymity is the rule, intentions are obscure, and meaning is less precise than it is richly ambiguous.”

[6] “But even here what the Tudor laity would most have noticed was the removal of the symbolic gestures which were often the aspects of the rite which impinged most directly on the lay imagination.” Duffy, 466.

[7] Ibid, 464.  “At the same time, however, he [Cranmer] took steps to eliminate the focus which had given meaning and power to that spectacle, by forbidding any elevation or showing of the Host.” 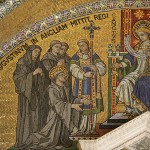 May 26, 2015
The Feast of Augustine, First Archbishop of Canterbury
Next Post 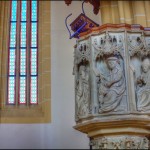 May 28, 2015 A Seminarian's Sermon for Trinity Sunday
Recent Comments
0 | Leave a Comment
Browse Our Archives
get the latest from
Evangelical
Sign up for our newsletter
POPULAR AT PATHEOS Evangelical
1

Answer to Question: What Must a...
Roger E. Olson
Related posts from The Liturgical Theologian