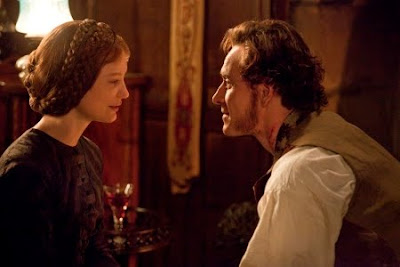 Charlotte Bronte’s well-loved novel introduced a heroine of such integrity, passion and flawed self-sabotage that it’s surprising more actresses aren’t clamoring to play her. But young Mia Wasikowska (The Kids Are All Right) did clamor, after reading the novel at age 18 and asking her agent if there were currently any film versions in the works. The pairing of this actress of astonishing gifts with a similarly-gifted and unique director (Cary Fukunaga, whose debut feature Sin Nombre, a Spanish language film about Mexican immigrants and drug gangs, won many international awards) has yielded a rich, memorable adaptation that just may make Gothic literature fashionable again, as fashionable as it was in the late Victorian era when Bronte’s novel first appeared. 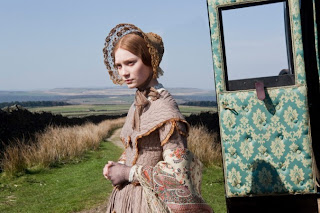 Jane’s story is sad and layered: she is born into wealth, cast off by her cruel aunt, raised in a cruel orphanage, and finds employment as a governess for a stern but good-hearted man, Edward Rochester, who develops feelings for Jane, but who harbors a terrible secret. This version begins about two-thirds of the way into the story, a flash-forward sequence of Jane’s flight from Rochester’s house into the wilderness, exposed to the rough weather on the windy moors, when she is discovered by St. John Rivers, a minister who lives with his sisters. Jane is soaked to the bone, shivering, lying in the bracken under the pouring rain. That Fukunaga chooses to open the film with one of the novel’s most evocative passages, but one of minimal action and no dialogue, signals viewers that watching this film will, uncannily, feel a lot like reading the book.

And I mean that in the best possible way. Two qualities set this very literary adaptation apart from the many excellent ones that have come before. First, it is truly gothic in every sense of the word: dark, spooky, psychologically intense and at times terrifying, from the heartless cruelty of Mrs. Reed to the murderous eyes of Bertha Mason. Second, it captures the natural world with rich detail: the stormy moors, the gardens of Thornfield Hall, the blossoming trees that hover over the newly-engaged lovers. Seasons, weather, time spent outdoors: these function as seamless story aspects rather than signposts of “atmosphere” as they might in a less thoughtful film. Very few heritage films manage to convey the centrality of nature in such stories without seeming precious or artificial. Jane Eyre unfolds in the mind as it unfurls before the eye, again, in much the same way one experiences reading Bronte’s novel. The stunning cinematography by Adriano Goldman (Sin Nombre, Conviction) and original score by Dario Marinelli (Atonement, Agora) further enhance the weather and lyricism of this film. 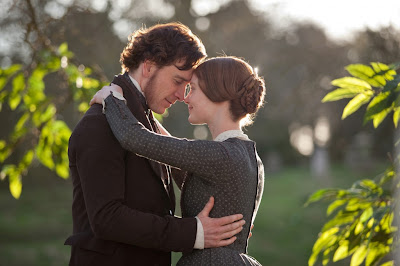 And then there are the fine performances. Miss Wasikowska is beguiling as the socially-awkward, soft-spoken Jane, whose intelligence and imagination belie her horrific childhood. An actress must somehow seem both plain and beautiful in this role, and Wasikowska’s otherworldly looks are suitably haunting. As Edward Rochester, Michael Fessbender (whose diverse resume includes a noble Roman soldier in Centurion, and a cheeky demon in the BBC series Hex) is compellingly rough, gentle, and constantly one mental step ahead of everyone, except the doe-eyed governess who bewitches him. Supporting players Imogen Poots (Fassbender’s pagan helpmeet in Centurion, as Rochester’s intended Blanche Ingram), Judi Dench (the assiduous but warm Mrs. Fairfax), Sally Hawkins (Mrs. Reed), Jamie Bell (St. John) and young Freya Parks (as Jane’s childhood friend Helen Burns) round out the excellent cast.

I cannot recommend Jane Eyre highly enough. Fukunaga has crafted a bona fide heritage film full of freshness and nuance, one that brings alive one of the finest novels ever written in the English language, a story of love, loss, courage, independence, forgiveness and triumph over adversity. Now, when’s the last time a film invoked the highest of human emotions in you? Reader, you’ll love it.

March 3, 2011
The History of Pagans in the Media: A Cautionary Tale
Next Post

March 21, 2011 Wake Wood
Recent Comments
0 | Leave a Comment
Browse Our Archives
get the latest from
Pagan
Sign up for our newsletter
POPULAR AT PATHEOS Pagan
1

On Turning 60
John Beckett
Related posts from The Witching Hour