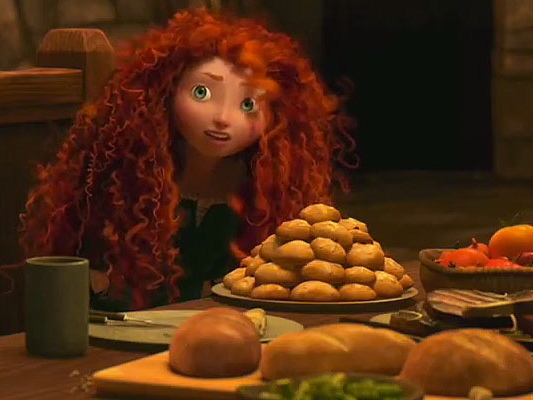 Honestly, I wasn’t expecting to like this very much. The fact that this free-spirited spitfire had to be a “princess” in order to appeal to audiences really rubbed me the wrong way. There is way too much “princess” branding aimed at little girls these days, and it’s annoying. It also seemed Pixar was having trouble figuring out how to market this: changing the title (It was originally called The Bear and the Bow; Brave seems like a faint echo of Braveheart, no?) and it seemed recent trailers were emphasizing either the “curse” of the witch or the silly stereotypical Scottish-tinged humor. I expected something frivolously humorous, clever to the point of preciousness, and probably fairly shallow.

But I was, to put it bluntly, blown away. Even the overdone character physicality, caricatured to the point of cartoonish (something Pixar does very well, since this seems to be what audiences like) stopped bothering me within a short time, as it was balanced by stunning art direction and animation.  This film has unexpected depth and complexity, and is beautiful and thrilling to watch at every moment.

The story is fairly straightforward: Merida (Trainspotting‘s Kelly Macdonald) is a young Scottish princess who enjoys being a tomboy: she rides her horse Angus through the woods, is an expert archer and thumbs her nose at the etiquette her mother Queen Elinor (Emma Thompson) tries to teach her. When the time comes for leaders of the clans ruled by her father King Fergus (Billy Connolly) to come together and present their eldest sons as suitors for Merida’s hand in marriage, the feisty young princess rebels and a rift is created between Merida and her mother.

Merida escapes to the solace of the forest and follows the blue light of a will o’ the wisp, which her mother says will lead her to her fate. The lights lead Merida to a witch’s hidden cottage. The witch (a hilarious Julie Walters) seems dotty yet slightly menacing, and, spurred by anger at her mother and the feeling that she was led there for some purpose, Merida asks the witch to perform a spell to change her mother so that Merida won’t be forced to marry. And the witch complies: the transformation is shocking and places both Merida and her mother in mortal danger. 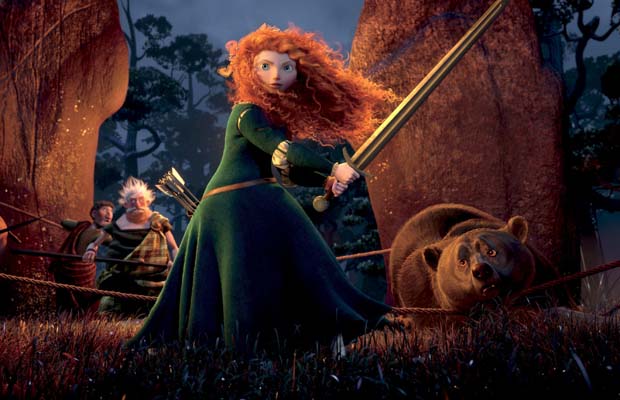 To reveal more would push me into spoiler territory, but I will say, the ensuing action is very suspenseful and surprisingly moving. I don’t think I have ever seen an animated film or, indeed, any film aimed at a young audience, that offers such an original and insightful exploration of the deep bond between mother and daughter, and of what happens to that bond when daughters begin to forge their separate paths to adulthood. This film is downright Jungian in its expression of these mysteries, using the imagery of pagan Scotland to weave a world where the human connection to the natural world is seen as the secret to happiness and fulfillment.

Of course, it’s also hilarious. Merida’s three young brothers (carrot-top triplets) are constantly stealing treats and causing mayhem, and the meeting of the clans is satisfyingly full of stereotyped Scots behaving badly. There is also a really fine selection of songs with a rousing score. I saw this in 3D but I can’t imagine it won’t be just as good in 2D. Just be sure to say something to the management if your theatre is showing the 2D version on a 3D lens (something happening all too frequently these days); you’ll know it if looks very dark and dingy. But DO absolutely see this on a big screen, it’s absolutely mind-blowingly wonderful, and I can’t wait to hear what you all think.

June 20, 2012
Casting of DEVIL'S KNOT near complete
Next Post

August 7, 2012 Crazy World...Just Add Religious Confusion
Recent Comments
26 Comments | Leave a Comment
Browse Our Archives
get the latest from
Pagan
Sign up for our newsletter
POPULAR AT PATHEOS Pagan
1