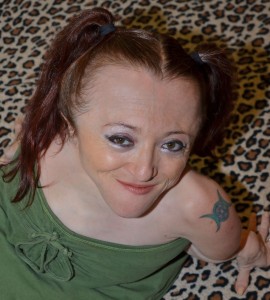 Jane Hash is an artist, healer, blogger and activist. She is also barely three feet tall. Born with a genetic condition that left her with multiple fractures, her health was compromised for most of her youth, and her mobility limited by the fragility of her bones. As an adult, Jane seems like a powerhouse of energy, humor, and no-nonsense ass-kicking. Her podcast “Hash it Out with Jane” gives voice to her activism and consciousness raising.

But don’t take my word for it: see her hilarious and provocative documentary film, PLAIN JANE: THE SHOCKUMENTARY! It’s now available on streaming video and for purchase.

The film tells the story of Jane’s youth in a straightforward way, avoiding the kind of emotional manipulation one might expect from a film about a severely-disabled person. Because she’s so upbeat and resilient most of the time, it’s tempting to see Jane as some of kind of saint or superhero, but hearing the details of her story make it clear she has her challenges and bad days just like all of us; she just deals with them from a motorized wheelchair. It’s refreshing to see her get angry about dealing with insurance bureaucracy or malfunctioning technology (she goes after her ailing PC with focused rage in one of the film’s funniest scenes).

The film straddles a line between garden variety documentary, with a narrator and a clear timeline, and little surreal fantasy sequences that might leave you scratching your head, laughing until you cry, or maybe raising your eyebrows while you try to close your jaw which has suddenly dropped wide open. But you get the sense that Jane’s approach to life has to be large, not because she is small, but because she’s had to overcome things most of us would find insurmountable. Not just her disabilities, but her emotional struggles with addiction and depression, which she has managed to overcome.

Jane is also a vibrant presence in the Ohio pagan community. Her pagan worldview and polyamorous activities (the films features several of Jane’s lovers) definitely comprise some of the “shocking” bits of the film. I’ve known Jane for a few years, having first met her at the Starwood Festival in western NY. She has a propensity for bawdy humor, talking frankly about poop (in fact she gives workshops on proper nutrition for effective bowel function, as well as ear candling and other holistic healing methods), colorful sarongs, sparkly eye shadow, and generally being a hundred pounds of awesome in a thirty pound package. Check out her blog, her podcast, and, especially, her inspiring film if you want to walk around feeling ten feet tall for the foreseeable future.

May 31, 2014 MALEFICENT: Full of pagan imagery
Recent Comments
0 | Leave a Comment
Browse Our Archives
get the latest from
Pagan
Sign up for our newsletter
POPULAR AT PATHEOS Pagan
1