The Cusp of Occultism and the New Age: MAD MEN’s Pagan Finale 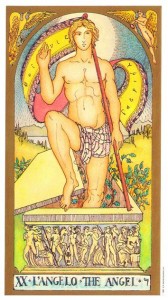 Last night, I attended the MAD MEN finale event at the Museum of the Moving Image in NYC (where there is a wonderful exhibit on display including sets and costumes from the iconic show). As a blogger for the Basket of Kisses website I was invited and offered to read tarot for the event’s attendees. The Angel/Judgment card came up a couple of times in peoples’ readings; so it was interesting that it came up a THIRD time when I did decided to pull a card after the finale to sum up what we had just seen. I had event co-organizer and Basket of Kisses co-founder Deb Lipp cut the cards for me. We both agreed this card was a perfect symbol for Don Draper’s last moments portrayed in the finale.

The Renaissance deck refers to this card as The Angel but it is variously called Judgment or The Day of Judgment. It signifies rebirth, awakening, redemption, immortality, absolution, and one’s higher calling. In the final scene, Don takes part in meditation session atop a scenic mountain in California. The retreat leader invokes the “Mother Sun” (shown prominently in this card- and an odd choice of words since the Sun is often associated with male deities; but California is the Sunshine State, and associated with Anna Draper, the woman who made Don’s life possible and is still a major influence upon him at the end). We witness Don’s rebirth/rejuvenation; his triumph over death (effectively he has now lost two wives to cancer, as well as his brother to suicide, and surrogate father Bert Cooper). A circle of figures, gods and humans of Grec0-Roman myth, surrounds the crypt that the young man is emerging from, Christ-Like, Lazarus-like, Osiris-like. There is green growth; the Phoenix has risen from the ashes. Gabriel blows his trumpet. The day looks bright.

We understand that the smile on Don’s face at the end is not necessarily because he has found inner peace but because the experience gives him a beautiful and brilliant idea, one that was praised far and wide and put Coca Cola in the company of the Century’s Greatest Advertisers: that “I’d Like to Teach the World to Sing” campaign. I just wanna say, I TOTALLY CALLED THAT ONE weeks ago! When Don got the Coca Cola account, and I had read rumors that she show would “leap forward” into the 1970s at some point, I had a feeling the iconic ad would figure in somehow…

I found myself also thinking of the moment of inspiration Don experiences in “Love Among the Ruins” when he sees his daughter dancing the Maypole with her teacher Suzanne, barefoot in a white dress and wearing a flower crown on her head…the dreamy music and imagery, Don touching the grass. We understand he is moved by Suzanne’s idealistic optimism, her creativity, and the music and misty photography capture this bucolic mood. It is not unlike the emotional context within which he creates one of his finest campaigns, the Kodak Carousel, in “The Wheel.”

1971 is a midway point for the widening diversity of spirituality in the United States, poised between the occult revival of the early 1960s, which we see represented in the show with Anna Draper’s interest in the tarot, the popularity of horror films like Rosemary’s Baby (revisited when the Manson Family killings are mentioned), and the Back to Earth movement seen in the “cult” (commune) Roger’s daughter Margaret becomes involved with. The California retreat Stephanie brings Don to portrays practices in consciousness raising that are a precursor of the New Age spirituality that would soar in popularity (later accompanied by crass commercialism and cultural appropriation) in the 1980s. The nods to nudism/naturism and the burgeoning “men’s movement” also suggest connections to the widening influence of neo-paganism. The Back to the Earth Movement was also the clarion call of the environmental movement, which for many pagans was their first contact with a spiritual community and belief system they did not yet have a name for, as it became intertwined with the Wicca practices beginning to find their ay to the United States from England. (This is of course a very over-simplified summary of these turbulent and exciting times.)

In 1971 Coca-Cola’s “hillside” ad premiered. (We are meant to understand that Don Draper returned to work and made an enormous success from his spiritual epiphanies and, perhaps, became a better person for it. I hope so.) The ad campaign featuring that iconic song had a number of versions, but all of them portrayed a youthful, ethnically diverse array of people, hand in had on a hillside, dressed in colorful hippie garb, such as one might have seen at Woodstock or a Central Park Be-In. It was still several years away from the Fall of Saigon, when the Vietnam war was still a prominent political cause and one that increasing numbers of Americans were horrified by. Messages of love and peace were already being spread by the counterculture, in artistic events like the Off-Broadway musical HAIR in 1968 (the original cast included Sally Eaton, a practicing witch), as well as the music of Bob Dylan, Pete Seeger, Crosby, Stills & Nash, Jefferson Airplane, Joni Mitchell, and other artists of the time. But music only reached those who played those records who attended those concerts, who tuned their radios to those stations. That memorable Coke commercial brought that message to every American living room via television. Its impact on the cultural zeitgeist cannot be overstated.

And dig one observant viewers’s take on that gal with the pigtails…Good eye!

June 10, 2015 Review: THE SISTERHOOD OF NIGHT
Recent Comments
0 | Leave a Comment
Browse Our Archives
Related posts from The Witching Hour