In my previous post, I summarized the Good and Questionable parts of Kevin DeYoung’s new book, What Does the Bible Really Teach about Homosexuality. Again, I think this is quite simply a fantastic book that needs to be read by every Christian. And I probably agree with 80-90% of what Kevin says. Still, by way of an internal critique—as iron sharpens 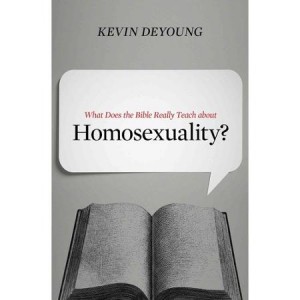 iron—there are some bits that I found questionable. Or, in the case of what follows, inaccurate,

In this review, I’m going to evaluate and critique Kevin’s take on the story of Sodom in chapter 2 of his book: “Those Infamous Cities: Genesis 19.”

Kevin defends the view that “homosexual practice” was “one aspect of Sodom’s sin and…a reason Sodom and Gomorrah were destroyed.” Kevin also, quite unhelpfully, labels all opposing interpretations a “revisionist…rereading” (pg. 35), which just isn’t true. I’m not a revisionist. And I don’t agree with Kevin’s reading of Genesis 19. In fact, my impression is that most non-affirming Evangelicals are moving away from applying Genesis 19 to the current debate about monogamous, consensual, same-sex unions.

Clearly the stuff going on in Genesis 19 is attempted gang rape (and by the entire city, mind you) and not consensual same-sex relations. Kevin recognizes this but still argues that same-sex relations are condemned by the story, and he gives three reasons why.

First, Kevin argues that Ezekiel 16:50, in describing the “sin of Sodom,” says that the city committed “an abomination.” And in Leviticus, the only time “abomination” occurs in the singular is in reference to male same-sex behavior (Lev 18:22; cf. 20:13). Therefore, one of the sins of Sodom had to be homosexual behavior in general and not just attempted gang rape.

Kevin’s statistics are right: the word “abomination” only occurs twice in Leviticus and only in reference to same-sex behavior. But on what basis can we read Ezekiel’s evaluation of Sodom in light of Leviticus? The word abomination occurs in many other passages in the Old Testament. It’s a pretty common term. Why choose Leviticus 18 and 20 as the interpretive lens for reading Ezekiel’s critique of Sodom unless you already think that Genesis 19 is about same-sex behavior and not violent gang rape? But again: there’s nothing in Genesis or the Bible that says that Sodom actually violated Leviticus 18:22 (or 20:13)—the prohibition against same-sex intercourse. The only sin in Genesis 19 that’s in the ballpark of same-sex intercourse is, again, attempted gang rape. But they were stopped. The Sodomites never even made it to first base.

But let’s just say Kevin is right. Let’s assume—and it can only be assumed—that Ezekiel 16:49 should be refracted through the lens of Leviticus 18 and 20 and onto Genesis 19. I don’t think it’s a bad argument, just not a very good one. In any case, the next two arguments for Kevin’s interpretation of Genesis 19 should be revised, or cut, in the second edition to Kevin’s book.

There are several problems with Kevin’s argument here.

Let’s begin with the three Second Temple texts above. If you read them for yourself, you’ll be hard-pressed to find any clear reference to same-sex behavior. The first one (T. Naphtali) says that the Sodomites “departed from the order of nature,” which could be taken as a reference to homosexuality if you are looking for it. But the next statement says “Likewise the Watcher’s departed from nature’s order” which clearly refers to Genesis 6 where angels had sex with humans. Then the text says “Likewise”—Naphtali’s word, not mine—the men of Sodom tried to have sex with angels. The parallel, quite explicit in the text, is between the “nature” of humans and angels. The point is not that the Sodomites departed from a heterosexual nature to a homosexual one.

The second reference (T. Benjamin) only mentions “sexual promiscuity” and not same-sex behavior. Again, maybe the author has in mind same-sex sexual promiscuity, but he certainly doesn’t say so. In fact, the very next statement in T. Benjamin 9:1 talks about sleeping around with “loose women,” which suggestions that heterosexual not homosexual promiscuity is in view. Kevin’s citation of T. Benjamin left out this part and I can understand why. It works against his argument.

Kevin’s reference to Jubilees 16:5 is fascinatingly suspect. Again, there’s nothing in the text that connects the story of Sodom with homosexual behavior. It only talks about “fornication” and “polluting themselves.” Kevin states rather confidently that “[t]he language of fornicating and of ‘polluting themselves’ in Jubilees suggests that Sodom’s sexual transgression was of a unique kind—not merely fornication, but also something more polluting.” But again, he doesn’t provide any evidence. I would need to see a word study on “fornication” and “pollution” in Jubilees to be convinced, but he doesn’t provide one. So how do we know that the word “pollution” must allude to same-sex relations and not “mere fornication?”

It’s been a couple years since I read through Jubilees, so I dusted off my copy of this rather rad Jewish book and re-read the main sections that deal with sexual immorality and/or the Sodom story. As far as I can see (and this would certainly need to be verified with further study), there’s no indication that “pollution” signifies same-sex behavior. In Jubilees 23:14 or 23:17, “pollution” is used to describe sin but it doesn’t specify a particular kind of sin and it certainly doesn’t describe same-sex behavior. The word “pollution” in Jubilees 7:20 almost certainly refers to the sexual sin of the angels in Genesis 6.

Again, it just feels like Kevin is grasping at anything that might possibly smell a little bit like something close to evidence and then uses it to support his point.

As far as Josephus and Philo go, it’s true that they sometimes use the Sodom story to condemn same-sex behavior. But Kevin doesn’t mention that Josephus and Philo also talk about the sin of Sodom with no reference to homosexual acts (Josephus, Ant 1:194; Philo, Abr 134). In fact, the “non-same-sex interpretation,” as we’ll call it, was by far the most popular Jewish understanding of why God destroyed Sodom, as seen in Second Temple Jewish texts (Wis 19:14–15; 3 Macc 2:5; T.Levi 14:6; Jub 20:5) and rabbinic literature (b. Sanhedrin 109a; b. Ketuboth 103aa; b. bab Bathra 12b; 59a; 168a; b. Erubin 49a). But Kevin doesn’t acknowledge these other texts when he draws on Jewish literature to support his view. Rather, he leans on the minority view. He also doesn’t acknowledge that in every other Old Testament reference to the sin of Sodom, homosexual behavior is nowhere to be found (Isaiah 1:10-17; 3:9; Jer 23:14; Zeph 2:8-11). Nor is it to be found in Jesus’s reference to Sodom in Matthew 10:5-10.

A broader look across all the pages of Scripture suggests that Sodom was not condemned for its homosexual behavior.

Third, and “[m]ost importantly,” according to Kevin, “Sodom and Gomorrah are associated with homosexual practice in the New Testament. Jude 7 says, ‘Sodom and Gomorrah and the surrounding cities, which likewise indulged in sexual immorality and pursued unnatural desire, serve as an example by undergoing a punishment of eternal fire’” (Jude 7).

Kevin cites the ESV which gives a misleading translation of Jude 7. The ESV’s translation “unnatural desire” makes me think of Romans 1, where same-sex relations are condemned. But my goodness, the Greek phrase in Jude 7 is heteras sarkos, which means “other flesh” or “strange flesh.” It does not mean “unnatural desire,” especially since this will immediately conjure up images of Romans 1, which is a misleading parallel.

And think about it. If Jude 7 had same-sex intercourse in view, wouldn’t he have said “same flesh” rather than “other flesh?” Again, Jude 7 clearly references Sodom’s attempt to have sex with angels, as the previous verse makes clear: “And the angels who did not stay within their own position of authority, but left their proper dwelling, he has kept in eternal chains under gloomy darkness until the judgment of the great day.” Jude here is referring to the Genesis 6 incident where the angels had sex with humans. Then, Jude connects this story with the story of Sodom in verse 7 by leading with “just as” or “likewise, Sodom and Gomorrah…went after heteras sarkos (other/strange flesh)” (Jude 7).

I agree, therefore, with Richard Bauckham, the most widely respected (and non-revisionist) commentator on Jude, who writes:

My concerns about Kevin’s chapter on Sodom aren’t just exegetical. They are pastoral. When a teen who’s wrestling with same-sex attraction hears about Genesis 19’s condemnation of homosexuality, what’s he going to think when he actually reads the passage? “Am I going to turn into a Sodomite? Will I end up desiring gang rape? Should I lock my self in my room before I violently hurt somebody?”

It’s not only interpretively inaccurate, but pastorally dangerous to map the modern debate about same-sex relations onto Genesis 19. It’s like comparing apples to astronauts.

I really want to make a plea to my non-affirming brothers and sisters to not only interpret the text more fairly and accurately, but to recognize the potentially destructive implications that result from using the wrong text to justify what may be the right view.

I hate to end on a sour note. So let me reiterate yet again that although I disagree with Kevin’s second chapter and a few things scattered throughout the book, I found the bulk of the book not only accurate but some of the best stuff on the Bible and homosexuality that’s in print. Everyone should read this book. But, as with any book, read it critically. Don’t check your minds at the door, even if you agree with Kevin’s conclusion. Especially if you agree with Kevin’s conclusion. Be a Berean. Search the Scriptures. And if you do, I believe you’ll find that despite some hiccups in Kevin’s argument—he’s right. The Bible prohibits same-sex relations.

May 6, 2015 Nepal Earthquake Relief
Recent Comments
0 | Leave a Comment
Browse Our Archives
Related posts from Theology in the Raw