America and Its Guns 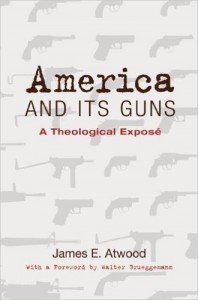 stunned. The statistics, the stories, the indifference, the political power plays in the face of innocent deaths, the role of money in the whole debate—even when lives are at stake. I know this is a messy topic and it defies simple answers. But this book has certainly blown the doors off my thinking on it.

Let me start by saying, as I often do, that I own guns. I hunt and fish and listen to country music and all that business, but I also love people more than I love my guns. Like many things that are morally neutral yet capable of becoming an idol, I like my guns but I don’t love my guns. I enjoy hunting and shooting, but gun rights are not my raison d’etre—my reason for existence. And if stricter gun laws would save more lives—even 1 life—then I’d eagerly vote for more laws. People are more important than guns. And last time I checked, Jesus believes that our freedom should be used to help people not hurt them.

Atwood’s book contains a lot of statistics. I haven’t triple checked them all to see if they are legit (he does provide ample evidence). But even if they’re marginally close to the truth, they’re scary enough to take notice.

Let’s pause and linger on that last point for a second. I’ve often heard (and might have even said) that criminals don’t buy guns legally. It’s the good guys not bad guys who would be without a gun if we had stricter gun laws. If we tighten our gun laws, the criminals will simply get them some other way.

If this were true, then why don’t we see many more gun-related murders (or deaths) in other countries? Why is America leading the way at nearly 10,000 gun-related murders and the next highest country is Canada at 200? If the bad guys can easily get guns illegally—and I suppose other countries have bad guys too—then why don’t bad guys in Canada, Germany, and Spain use guns (illegally) to kill people?

Let’s get back to the statistics:

These statistics are startling, especially if you’re a woman or a child. And yes, I’m well aware of Mark Twain’s instructive dictum: “There are lies, damned lies, and statistics.” We can’t base truth on statistics alone.

However, we also can’t base truth on anecdotal stories or personal opinions alone. Even if you think you’re safer by owning a gun, this doesn’t make you safer by owning a gun. Some say that guns actually save lives, or that your uncle Bob once shot a potential murderer and saved tons of lives. But this doesn’t capture the broad scope of what’s going on. Statistics aren’t inerrant and they can be misused. But in the words of my friend David Kinnaman, statistics are better than your personal guess and anecdotal stories.

Now, different people will promote different statistics. Apparently Dr. Gary Kleck, who’s rounded criticized by Atwood, says that guns save the lives of 2.5 million people every year. According to Kleck, this includes verbally telling a killer that you have a gun (54%), pointing a gun at a criminal (47%), or shooting a “warning shot” with a criminal present (22%) (pp. 100-101). This is where it gets super messy. Who do you believe? Which statistic is accurate? The tough thing about Kleck’s research is that he’s largely going on personal testimonies. Every single Joe and Frank and Billy Bob who said that his dag gum pistol done did scare away that no good criminal is taken at face value. But how de we measure this? How do we know that if Billy Bob didn’t own a 12 gauge, the intruder would have killed his family? Can we take personal testimonies at face value? Because 12 million people have claimed to have seen a UFO and 1 million people say they’ve met a space alien. Asking people their opinion on a matter (“was it your gun that scared him away?”) is risky business. Even if Kleck’s research is accurate, the best thing we could do is keep a gun close at hand and load it with blanks.

One of the things that Atwood continues to point out is the ease by which people can purchase guns at gun shows. “Felons, domestic abusers, terrorists, youth, and persons with adjudicated mental illness can go to a gun show and buy a gun from unlicensed sellers with no questions asked” (p. 12). And this does concern me. I’m not ready to say that American citizens can’t own guns, and neither is Atwood. He’s an avid hunter and doesn’t want to strip America of all its guns. He’s only arguing for stricter gun laws that help keep guns out of the hands of people who shouldn’t own them. And unless his statistics are all out of whack, this makes good sense to me.

I do have a few critiques of Atwood’s book that go beyond mere typos (which were plentiful; see pp. 34, 45, 136, 174). Most of my critiques have to do with Twain’s thoughts on statistics. As I said, I think there’s a valid place for statistics; we need to consult them. But we also need to recognize that statistics can be used to support one’s agenda. Atwood would often cite a statistic and then build a “see, look at that!” kind of argument. But I need more. Statistics, while helpful, need to be put on the stand and asked a thousand questions.

I’m also still wondering about the whole “guns save lives” pushback and I’m not convinced that Atwood has proven that guns don’t save lives. (It’s a moot point, of course, when we look at this question through a Christian ethic of nonviolence.) Atwood kept poking fun at the statement “guns save lives” throughout the book but only took 3 pages to address it head on (pp. 99-102). Within those 3 pages, he didn’t really prove that possession of a firearm, saying you have a firearm, or shooting a firearm in the arm has not been a successful way to scare off an attacker. Personally, I need to look deeper into Kleck’s research and his (many) critics to see what I think.

At the end of the day, however, I was deeply compelling by Atwood’s study. I’m not sure how anyone would argue otherwise, and I’m genuinely interested to hear what I’m missing. America possess more guns (300 million) than every other nation by far. And America consistently has the most gun-related deaths and murders than every other nation by far. I guess I need to see a compelling argument that shows how these two startling statistics are not related.

March 31, 2016 Sexual Fluidity: Understanding Women's Love and Desire
Recent Comments
0 | Leave a Comment
"I just want to point out to current readers that EBC is now fully accredited ..."
Shannon Tristal Why I Love Eternity Bible College
"I don't think God killed Jesus; but I am beginning to think someone killed Preston ..."
Caspian Did God Kill Jesus?
"I remember reading a book written in the late 1940s that claimed young people at ..."
ThoughtorTwo . Why Are Millennials Leaving the Church ..."
"First of all, this was from almost a year ago. Second, if Jesus is going ..."
Hilary Jesus Was a Jew: Understanding Jesus ..."
Browse Our Archives
get the latest from
Evangelical
Sign up for our newsletter
POPULAR AT PATHEOS Evangelical
1

Christianity vs. Christendom?
Cranach
Related posts from Theology in the Raw