As mentioned in my previous post, I’ve been combing through some recent books on violence and 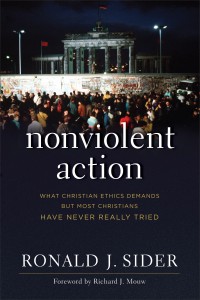 nonviolence. One of the most fascinating ones I’ve read on the topic is Ron Sider’s Nonviolent Action: What Christian Ethics Demands but Most Christians Have Never Really Tried (Baker, 2015). Good. Night. This book is good! If you love history, if like reading about revolutions, if you love Jesus and beauty and courage and want to see how faith applies to the real world, then you’ll love this book. But if you want to believe what you’ve always believed, and if you’ve always believed that violence is the only way to defeat the really bad guys in the world, and if you think that nonviolence is just for for cowards, liberals, pot-smoking hippies, and people who couldn’t win a fight anyway, then you probably won’t like this book. “Don’t confuse me with the facts,” you’ll say. “Just let me keep watching my old WWII documentaries.”

Ron Sider is a top-notch scholar with a prophetic megaphone. He shook the evangelical world back in the 70’s with his ground-breaking book, Rich Christians in an Age of Hunger, and this book is very similar.

Those of us who advocate for nonviolence often face our cynical critics who roll their eyes and pat us on the head. “There, there. That pacifism stuff is a cute idea. But in the real world, there are really bad people who want to do really mean things to nice people. When it comes to really bad people, nonviolence doesn’t work.”

According to the most thorough study on 325 violent and nonviolent insurrections against ferocious dictators armed to the teeth, “nonviolent resistance campaigns were nearly twice as likely to achieve full or partial success as their violent counterparts” (Sider, p. 159). Unfortunately, the American narrative is so bent toward violence that we have no category for this. Saying that nonviolent campaigns have been more successful is like saying 2 + 2 = orange. It doesn’t compute. It doesn’t make any sense. I tell people this and they just stare at me like I’m speaking Japanese.

But it does work. According to actual history (and not just Marine advertisements and Fox News), nonviolent campaigns contain power. Real power. Moral power. Political and economic power. And Sider has done a fantastic job documenting such movements.

He begins by looking at successful nonviolent revolts among the Jews in the first century (toward Pontius Pilate and Gaius Caligula) and then spends a good deal of time talking about several ironically successful nonviolent revolts in the 20th and 21st centuries: Gandhi’s Salt Campaign (pp. 19-25), MLK’s civil rights movement (pp. 27-45), nonviolent campaigns against the U.S.-backed atrocities in Nicaragua in the mid-1980’s, which Sider witnessed first-hand, the Revolution of the Candles in East Germany (1989), Liberia’s female-led liberation movement in the early 2000’s, nonviolent campaigns during the Arab Spring of 2011, and many others.

The historical and ethical point is clear: nonviolence works. It’s a powerful force. We don’t need to return evil for evil. God has provided us with a better way. A more effective way. A more Christian way.

Sider is not alone. There are several books and documentaries that talk about the power of nonviolence. Peter Ackerman and Jack DuVall’s A Force More Powerful, Mark Kurlansky’s Nonviolence: The History of a Dangerous Idea, and Erica Chenoweth and Maria J. Stephen’s, Why Civil Disobedience Works, which surveyed the 325 violent and nonviolent insurrections mentioned above. As these books have shown, Gandhi was right: “Non-violence is the summit of bravery” (Sider, 17).

We serve a slaughtered Lamb who defeated evil by absorbing violence and rose to tell the tale. Jesus didn’t turn the world upside down by endorsing an American ethic of power, but by introducing the world to a countercultural ethic of enemy love.

They have conquered him (Satan) by the blood of the Lamb and by the word of their testimony, because they loved not their lives even unto death” (Rev 12:11).

March 29, 2016 America and Its Guns
Recent Comments
0 | Leave a Comment
"I just want to point out to current readers that EBC is now fully accredited ..."
Shannon Tristal Why I Love Eternity Bible College
"I don't think God killed Jesus; but I am beginning to think someone killed Preston ..."
Caspian Did God Kill Jesus?
"I remember reading a book written in the late 1940s that claimed young people at ..."
ThoughtorTwo . Why Are Millennials Leaving the Church ..."
"First of all, this was from almost a year ago. Second, if Jesus is going ..."
Hilary Jesus Was a Jew: Understanding Jesus ..."
Browse Our Archives
get the latest from
Evangelical
Sign up for our newsletter
POPULAR AT PATHEOS Evangelical
1

A Model for Church Discipline
Roger E. Olson
Related posts from Theology in the Raw