It’s been nearly three years since I published my book Fight: A Christian Case for Nonviolence. As a 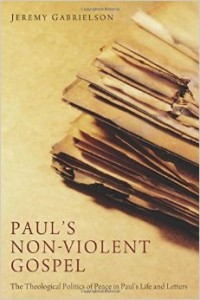 life-long student, I like to revisit topics I’ve written on, especially ones as volatile as nonviolence. I’ve been giving several talks on nonviolence this Spring, including the upcoming Q conference in Denver, where I’ll be dialoguing with fellow Idahoan (go Broncos!) Doug Wilson about gun control and enemy love. To dust off my thinking on the subject, I’ve been plowing through some recent books written on violence and nonviolence to see if I still believe the stuff I wrote about in Fight. So far, the answer is yes—more than ever. Jesus calls his followers to a nonviolent life, even if American Evangelicalism disagrees.

Among the books I’ve been reading is Jeremy Gabrielson’s published Ph.D. dissertation titled Paul’s Non-violent Gospel: The Theological Politics of Peace in Paul’s Life and Letters (Wipf and Stock, 2013). I wasn’t able to consult this book when I was researching for Fight, yet I’ve had my eye on it ever since.

Gabrielson’s book is a welcomed contribution to the discussion for several reasons. First, it’s a dissertation, not a blog or a pop-level tirade. Gabrielson wrote his dissertation under Dr. Bruce Longenecker at St. Andrews University in Scotland (Bruce is now at Baylor in Texas). Having been through the grind of doing a Ph.D. at a U.K. university, I’m familiar with the brutal process. You don’t just spit out a thesis and have people put their stamp of approval on it. You’ve got to inch your way through a mountain of research and synthesize a compelling and original argument that impresses even your critics. This doesn’t mean Gabrielson is right; it just means he’s thorough, meticulous, and compelling—even with his those who disagree with him.

Gabrielson’s second contribution comes with his study on Paul’s appeal to the so-called Jesus-tradition. I’m not sure if you’ve noticed, but it’s rather strange that we see hardly any references to the teaching of Christ in the later NT writers, including Paul. It’s one of the “elephants in the room” of NT scholarship. Why don’t NT writers quote Jesus more often? Why don’t they appeal to him to justify their views? Sure, they cling to Jesus’s death and resurrection. But when Paul talks about prayer, as he does in all his letters, why doesn’t he appeal to Jesus’s robust prayer life? Or when Paul elevates celibacy to the high heavens (1 Cor 7), why doesn’t he swing at the softball Jesus lobbed him: “It’s okay to be married, I guess. But if you really want to be like Jesus…”

Paul’s lack of appeal to Jesus is striking. However, equally striking is the fact that when Paul does appeal to Jesus—echoing his words, appealing to his teaching—he likes to highlight Jesus’s nonviolent life (for instance, in Romans 12). Gabrielson jumps on this pony and rides it for several chapters.

Thirdly, Gabrielson looks at two New Testament books that are often left out of the discussion: Galatians and 1 Thessalonians (pp. 55-163). His chapter titled “Trajectories of Violence and Peace in Galatians” (p. 55-138) is particularly fascinating. In my own work, I don’t think I’ve ever appealed to Galatians. But Gabrielson shows that Paul’s 180 degree turn from his violent Jewish past (see Gal 1:13-14, 22-23) toward a peace-loving apostle is a reflex from his encounter with a nonviolent Messiah.

Beginning with his self-portrait of his former life in Judaism as one which was conformed to the modus operandi of the unregenerate world, Paul calls attention to the violent politics in which he was a participant and by which he achieved a certain renown…The violent persecutor died at the apocalypse of the Son of God, but the biography of Paul took on a new trajectory, one what became increasingly confirmed to the portrait of the Son of God (p. 137)

My own quibbles with the book are minor. I wish Gabrielson would have addressed some specific nuances in the passages he studied. For instance, in his otherwise thorough treatment of Matthew 5 (pp. 24-35), he didn’t really prove that Jesus’s words apply to violence on the whole rather than just retaliation or persecution. There are several really good pushbacks to the nonviolent position regarding the application of Matthew 5:38-43. (For instance, if we interpret “turn the other cheek” absolutely, then should we not also interpret the following “give to everyone who asks” absolutely as well?) I don’t think that Gabrielson sufficiently addressed some of these questions.

Overall, I really enjoyed the book and agree with it. If you want to base your views on emoticons and political sound-bites, then stick to Twitter. But if you want to roll up your sleeves and dig deep into the biblical text with an open heart and curious mind, then I’d highly recommend this book.

March 25, 2016 Nonviolence: More Powerful than Violence
Recent Comments
0 | Leave a Comment
"I just want to point out to current readers that EBC is now fully accredited ..."
Shannon Tristal Why I Love Eternity Bible College
"I don't think God killed Jesus; but I am beginning to think someone killed Preston ..."
Caspian Did God Kill Jesus?
"I remember reading a book written in the late 1940s that claimed young people at ..."
ThoughtorTwo . Why Are Millennials Leaving the Church ..."
"First of all, this was from almost a year ago. Second, if Jesus is going ..."
Hilary Jesus Was a Jew: Understanding Jesus ..."
Browse Our Archives
Related posts from Theology in the Raw