In Doug Wilson’s recent Q talk, he referenced this famed saying, and, no joke, integrated it as part 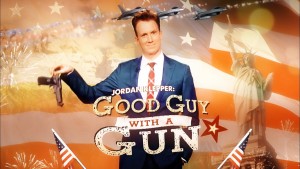 Unfortunately, the real world is much more complicated than Hollywood makes it out to be, even though The Good, the Bad, and the Ugly remains one of my top five favorite movies of all time. I’ve got a friend who’s a Navy SEAL sniper, and a darn good one at that. He laughs at the “good guy with gun stops bad guy with gun” myth. As a sniper, he has trained for thousands of hours to be the good guy with a really accurate gun, and even he says that high intensity situations are so incredibly unpredictable. Even with thousands of hours of training, pulling that trigger is one of the most hardest things he’s ever done.

What makes us think that the average Joe with a concealed weapon permit is qualified to make these split second decisions?

Shots are fired. Man with a gun. A bad guy with a gun! Or a good guy reaching for his cell phone? No! A bad guy with a gun. Or maybe another good guy with a gun. Is he shooting? Or laying down his gun? Is that a gun? How do you know? Are those kids behind him? Will you shoot them if you miss the bad guy with a gun? Are you still sure he’s the bad guy? How do you know? Shots are fired. Right behind you. Wheel around and fire back. Another bad guy. Ready to kill. Or is it an undercover cop? Shooting the bad guy. Good guy or bad guy? Two seconds to decide. Where are the kids? Bang! You shoot your gun. Two times. Bang, bang! Adrenaline kicks in. Three more times. Bang, bang, bang. People are dead. Better check to see if they’re bad guys. Where are the kids?

Call me a party pooper, but I don’t trust the average American, revved up on Fox News and a vigilante spirit, to perform well in a high intensity situation that he’s not trained for. As one combat veteran said:

[T]hink about 10 or 15 people, who are weekend shooters with limited tactical training, deciding to shoot it out with a criminal in a crowded office holiday party, a medical clinic or a darkened theater, while people are screaming and running, and no one knows who or how many of the people shooting are the “good guys” and how many of them are the “bad guys.”

In some cases, can a “good guy” with a gun neutralize the threat and help save lives? Absolutely. But it doesn’t happen very often. It is, for the most part, a myth perpetuated by people who’ve never been shot at.

“It is, for the most part, a myth perpetuated by people who’ve never been shot at,” says this trained soldier. And many combat veterans agree. The good guy with a gun mantra is largely a myth.

In fact, the FBI recently released a massive study on the 160 active shooter incidents between 2000 and 2013. Most of these situations ended with the shooter committing suicide. But 26 of 160 were stopped when someone in the crowd stopped the shooter. You might think this is a decent enough percentage to justify the good guy with a gun myth, but according to the study, only 5 were stopped with a guy with a gun while 21 were stopped by unarmed civilians.

Good guys with no guns were four times more successful at stopping bad guys with guns.

If the only way to stop a bad guy with a gun is a good guy with a gun, then the only guy I want to see packing is Jesus. He’s the only good guy I trust. And he’s packing, alright. But his weapon is a cross not a gun, and he calls his followers to pick up our own.

If you don’t believe me, then just ask Jordan Klepper. He makes a much more compelling case than I did (viewer discretion advised).

April 26, 2016
The Bible on Self-Defense: A Response to Doug Wilson
Next Post