Why "No One Knows the Day or Hour" is a WEAK Argument Against Rapture Predictors! (Reflections on Mark 13) All over the web this past week we’ve observed an interesting back and forth.  The “forth” is that Herald Camping wrongly put forth that the rapture was to occur last week Saturday… obviously either no one is a true Christian so no one was raptured or the Family Radio host failed.  The “back” by many amazing Christians that rightly knew that the return of Jesus cannot rightly be predicted by anyone but God pointed to this passage (or its parallels):

But about that day or hour no one knows, not even the angels in heaven, nor the Son, but only the Father.  Be on guard! Be alert! You do not know when that time will come.  Mark 13.32-33

Let me be the first to proclaim that I AGREE with the outcome of the “back-ers” on this issue.  NO ONE KNOWS when Christ will return.  The Bible contains no mathematical codes to detect when the renewal of creation will take place at his coming.  God gives zero instructions about interpreting numerical data to yield a formula with outputs being dates and times.  Certainly numbers have meaning in the Bible, but ONLY as rhetorical devices, not for dating apocalyptic events that have yet to be fulfilled.  To use numbers in this way is irresponsible and unfaithful to God’s revealed story.  Obviously, Family Radio is wrong to claim that “we can know.”  We simply cannot. 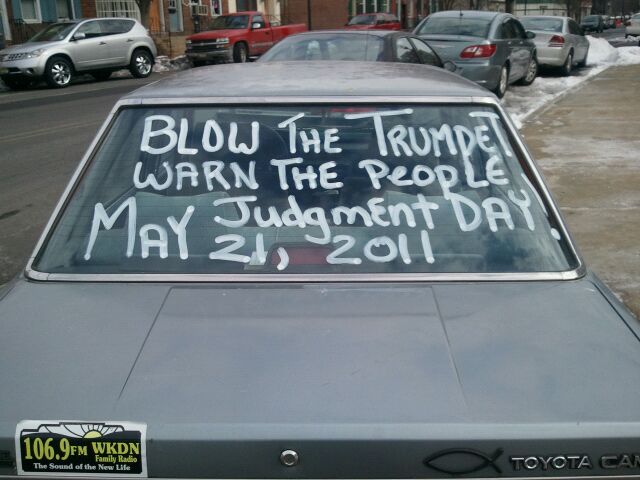 So, what am I getting at then?  One thing that I am passionate about is attempting to read passages of Scripture in their historical, biblical, and rhetorical context. I affirm a future second coming.  I believe the ultimate reason for Christ’s return is to: resurrect, purge, heal, and eternally reign in the renewed creation.  The problem I have then, is not with the second coming.  My issue is with attributing Mark 13 (and parallels) to pointing to anything other than something that already happened in history: the destruction of the Temple in 70 AD.

All of Mark 13 describes how Jesus acted as an apocalyptic prophet to declare that God’s judgment on unfaithful Israel was coming within “this generation” (v. 30).  This generation does not mean now… it means the generation of the disciples who sat and listened to Jesus’ answer to their questions about:

These questions follow Jesus’ prophetic statement that “not one stone [of the Temple] will be left unturned.”  If those are the questions to be answered in the whole of Mark 13, then what ramifications for interpretation does the text leave us with?

After the questions, the chapter continues by answering with the kind of things that will take place leading up to the destruction of the Temple:

Then, there will be cosmic signs (sun darkened, moon dimmed, stars falling, earthquakes), which is a Jewish way to describe cataclysmic political disaster and change.  There are several examples of this language in the Old Testament that always point to a political reality, not the literal convulsion of the cosmos.  We, too, do this with language.  Imagine if you were to read the headline: “9-11 was an Earth Shattering Event.”  Such a description wouldn’t make you think that an “earth shattering” earthquake caused the towers to fall, but is a way of saying that what happened shook up history as we know it.  Same is true here.  Jesus is simply using a Hebraic prophetic rhetorical devise to explain the coming doom of Jerusalem.  God will not destroy the created order, rather “the creation itself will be liberated from its bondage to decay and brought into the freedom and glory of the children of God.” (Romans 8.21)!!!

Next, the great “Son of Man” statement comes in verse 26.  This points to Daniel 7 where the “son of man” comes up to the throne of God to be victoriously vindicated to a position of authority after a time of suffering.  For Jesus, this will ultimately happen when the Temple is destroyed, for it will prove that HE is the true Temple!  Jesus is claiming to be the fulfillment of Daniel’s apocalyptic vision, and people will see this to be true once the Lord’s prophecy is fulfilled.  This happened in 70 AD! Jesus seals the deal by following this up in verse 30 by saying: “…this generation will certainly not pass away until ALL THESE THINGS have happened.”  Again, ALL THESE THINGS did happen, just as Jesus predicted! photo © 2006 Ivan Salas | more info (via: WylioSo, we come to the verse at hand, 32-33.  What does “… about that day or hour no one knows” actually indicate?  No one knew (in the first century) exactly what day or hour the Temple would be destroyed and the Jewish age of sacrifice finished. But they did have parameters for about when it would take place: within the generation of the first disciples.  Jesus’ words were all fulfilled!  There’s no hint in this text about a second coming… yet we can certainly be assured that other NT text affirm this reality (Acts 1.10, 1 Thessalonians 4.16-17, 1 Corinthians 15, Romans 8, Revelation 21-22, etc.).

The truth is that Family Radio put “forth” a message that turned out to be false.  There are no codes or maps to the ‘end’ in the Bible.  However, I want to question whether the majority of Christians who responded “back” with “no one knows the day or the hour” was the most biblically helpful response.

[1] Matthew adds a 3rd question about the timing of the “end of the age.”  This should not be read as meaning the “end of the world” but rather then end of the Jewish age of Temple worship.  We read into this passage “end of the world” questions that if we look closely enough, are not actually in the text.  My view is that we have been conditioned to think this way by a tradition, not by a clear reading of the text in context.

***To get a more detailed look at all of these issues, read this series on Mark 13 called “Earthquakes: Signs of the Times?” or my academic version here.  Also, it is possible by application to apply this passage to the second coming (just as no one knew when God would vindicate Jesus by destroying the Temple system), but it serves as an unconvincing proof for the argument at hand.  N.T. Wright, in my opinion, gave an “off the cuff” response to this issue by saying “no one knows…”  Unfortunately, that basically contradicts everything that he has written on the subject.  He gave a simple answer in a casual fashion, so I don’t think we need to be too frustrated by it.  Consider the following quote from Mark For Everyone after he has expounded the view I share above:

But what does this mean for us, who look back on the events of AD 70 as a distant tragedy?  Partly, it is important for us simply to absorb the once-for-all significance of the moment in history when this great transition took place.  Christians increasingly need to realize that unless we understand the first century we will not understand our own times, or what sort of people we ourselves are called to be.  But it is also important for us to remind ourselves of our own call to watch, to be alert.  The judgment that fell on the Temple is a foretaste, according to other passages in the New Testament, of the judgment that will fall on the whole world.  This time there are to be no signs (despite the regular attempts to speculate on such things), no advance warnings.  Just the ongoing command to God’s people in Christ to be faithful to him, not to compromise with the standards and fashions of the present age, but to keep awake, watching, as Paul again says, for the day to dawn… (Mark For Everyone, 187)

May 23, 2011 Camping Responds to Rapture Failure: World to Be Destroyed On October 21, 2011 (My Thoughts)
Recent Comments
88 Comments | Leave a Comment
"i have broken one the biggest unwritten rules of American Evangelicalism by actually finding democrats ..."
Wesley 8 Signs That You Might Be ..."
"In Luke 21:36 Jesus said: "So keep watch at all times, and pray that you ..."
Tamara Bogner Why the Rapture isn’t Biblical… And ..."
"WRONG! Jesus was clearly speaking about the last days and latter times in which His ..."
Lethal Hazard Why "No One Knows the Day ..."
"The motivational speaker is homest because at least they know people have to so the ..."
Critically Think What’s the Difference Between Preaching and ..."
Browse Our Archives
Related posts from The Pangea Blog