“Everything is MEANINGLESS!” Interview with Pete Enns on Ecclesiastes (1 of 3)

Below is an interview between myself and OT Scholar Pete Enns.  He is one of the foremost thinkers on critical scholarship and evangelical faith.  You can read his thoughts on Ecclesiastes below, which in my opinion is one of the most confusing books in the bible. You can read the other parts of the series here….

Your commentary on Ecclesiastes is due out this October. Tell us about the commentary series. What is distinctive about it?

My commentary is in The Two Horizons Old Testament Commentary series published by Eerdmans. The aim of the series is to bring the ancient text into conversation with contemporary theology and practice. Each commentary in the series follows the same general template.

The first half of the commentary lays out the argument of the book, section by section (not verse by verse). This is the nuts and bolts of “what exactly is Ecclesiastes trying to do?”

The fact that Ecclesiastes is “aggressively pessimistic” makes for an interesting discussion when we get to second half of the commentary.

What do you mean by saying Ecclesiastes is “aggressively pessimistic”?

The main character of the book, called Qohelet, has some pretty harsh things to say about life as an Israelite. He is not simply skeptical. He is undone. He is in faith-crisis mode, and he pulls no punches letting us know it. His big beef is with God. Qohelet is angry with him.

Qohelet is angry with God? How so?

Qohelet looks around him and concludes that all of life is utterly senseless and absurd (“vanity of vanities” as the KJV puts it, “meaningless” in the NIV). Qohelet sees life this way because no matter what we do, no matter how much effort we put into anything, at the end of the day we have nothing of lasting value to show for it. Sure, you may acquire nice things, even a bit of fame, but—as the saying goes—you can’t take it with you.

That brings us to his main point: nothing we do has lasting value because we all die and will be quickly forgotten. This is a horrible situation, and there is no one to blame for it but God. He is responsible and there is nothing at all you can do about it. So, the best you can do the few years of your life is try to enjoy what you have and not think about the absurdity of it all.

To put it another way, Qohelet does not see the payoff of being an Israelite, since death completely neutralizes all of our efforts—and God is the one who set life up that way. Qohelet is not happy.

So, Ecclesiastes seems to be a book of little spiritual value?

You’d think so, wouldn’t you, but you’d be wrong. That kind of thinking is why Christian commentators have tended to go in one of two directions in trying to make Ecclesiastes “fit” with the rest of the Bible and with Christian theology.

You either safely dismiss what Qohelet says as heretical so you don’t need to pay attention to 12 chapters of venting, or you try to make Qohelet sound less dismal, even joyful.

I’m guessing that you don’t like either of these options.

Good guess. Either of these options undercuts the theology of the book.

You can’t make Qohelet out to be theologically safe. He does not give you that option. Nor can you write Qohelet off, either, as some heretical, impulsive, or immature simpleton. The fact that he is allowed to carry on for 12 chapters should send a clear signal that his words are not meant to be brushed aside.

Further, the end of the book won’t let you dismiss Qohelet’s words. In 12:9-14 we hear the voice of the book’s narrator (the same narrator who introduced Qohelet in 1:1-11). He neither condemns nor even corrects Qohelet, but calls him wise.

The narrator affirms Qohelet’s venting about God and the senselessness of life?

Correct, but the narrator does not leave his readers there. He affirms Qohelet while also moving beyond Qohelet. That is the key notion that helps the pieces of the puzzle fall into place.

In 12:9-14, the narrator delivers his assessment of Qohelet’s words. The narrator tells us that Qohelet is wise—Qohelet is onto something worth listening to. And yes, his words may sting (like a goad with an embedded nail at the end to herd sheep, as the narrator tells us). But don’t continue in Qohelet’s line of thinking. At some point you need to get out of our head. (This is what he means by “the making of many books wearies the flesh.”) Instead continually turning all of this around and around in your head, the narrator says, “Enough. The end of the matter. Fear God and keep the commands.”

The narrator does not dismiss Qohelet as someone who needs to get with the program. He affirms Qohelet but then counsels his readers stay on the path anyway, to fear God and obey his commands.

That sounds like a rather orthodox response to Qohelet.

It is. Fearing the Lord and obeying his commands define Israel’s life as the people of God—fear and obedience sum up Israel’s wisdom and legal traditions. So, the book as a whole is a paradox. Qohelet says that being an Israelite has no lasting payoff, and the narrator affirms Qohelet’s observations as wise. But the narrator’s counsel is to continue being an Israelite anyway.

OK, so, with all that being said, summarize the point of Ecclesiastes in a sentence or two. What is the Ecclesiastes trying to say?

Struggling with alienation from God is a normal part of the faith journey. And when (not if) you struggle, keep going anyway.

Qohelet: “It sucks being an Israelite.
Narrator: “Dude, good call. You are so right. Be an Israelite anyway.”

Peter Enns (PhD, Harvard University) is senior fellow of biblical studies for The BioLogos Foundation, an organization founded by Francis Collins that explores, promotes, and celebrates the integration of science and Christian faith. From his office in Philadelphia, Pennsylvania, he writes a regular column for The BioLogos Forum blog Science and the Sacred. Enns has taught at Eastern University, Fuller Theological Seminary, and Westminster Theological Seminary and is the author or editor of several books, including Inspiration and Incarnation: Evangelicals and the Problem of the Old Testament and two forthcoming books –Ecclesiastes (Two Horizons Old Testament Commentary) and Evolution of Adam, The: What the Bible Does and Doesn’t Say about Human Origins.

You can order Pete’s commentary for “pre-order” by clicking the image below: 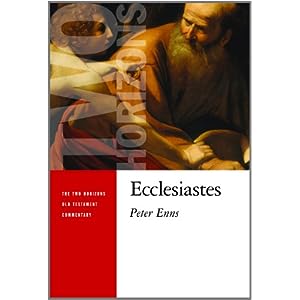 September 26, 2011
Resource of the Week: Recovering the Scandal of the Cross
Next Post

September 28, 2011 "Everything is MEANINGLESS!" Interview with Pete Enns on Ecclesiastes (2 of 3)
Recent Comments
21 Comments | Leave a Comment
Browse Our Archives
Related posts from The Pangea Blog