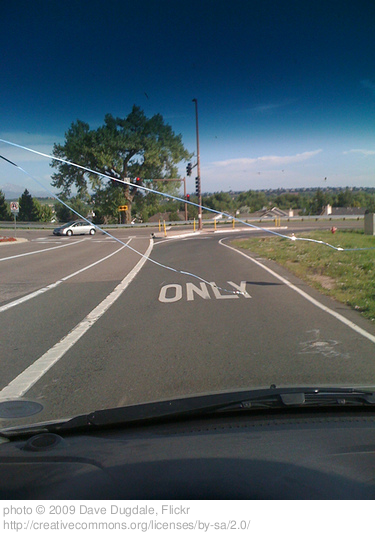 A few years ago I was on my way to a speaking engagement in LA.  While I drove over the Grapevine, I saw an object moving rapidly toward my windshield.  Before I could figure out what was flying toward my car, I heard the impact… “ding!”  The object struck the bottom right hand side of my windshield and left a small crack.  Before long, the crack started climbing across my windshield, until an arc shaped horizontal line went all the way across my window.  I was frustrated, but also cheap.  I decided to leave the crack alone as it wasn’t blocking my line of sight and it appeared to have stopped growing.

Enter, three years later.  Same crack.  Same window.  But, something happened over time – not to the windshield, but to me.  The fracture in the glass eventually became normal.  Deep down I knew the crack was there and that it wasn’t supposed to be… but instead of doing something about it I decided to look through the windshield as though the crack didn’t exist.  The crack was only there if I let myself focus on it.  In other words, I chose to look past the crack in the windshield rather than choosing to repair it.  My normal view included the crack.

I want to suggest that we often view our world in this way.  The window through which we gaze at our world is full of cracks and imperfections.  The easy thing to do is to ignore such problems, to allow them to become normal.  When the cracks of our world become “normal” a subtle apathy can creep in.  Instead of viewing ourselves as the people who can repair such brokenness, it’s easier to simply ignore it. We think:

The cracks in our world are quite obvious, really.  We need not venture out of our homes before seeing 3 or 4 news stories that illustrate such cracks.  A child gets kidnapped.  A country declares war.  A plane crashes.  A famine threatens the lives of millions in the horn of Africa. And all of this before our first cup of coffee.  By the time we walk out of the door for work or school, we’ve been overloaded with the many troubles in our world.

Then, the day begins and we realize that there are stresses in our personal spheres of reality that are enough to overwhelm us (without the help of the media).  We’ve gotta make sure our family is taken care of.  There’s three homeless people by three different streetlights that we drive past each day.  There’s the family member that keeps choosing to live in darkness and no matter how much we talk to them, and no matter how many times we pray… they simply won’t “see the light.”  Then, of course, there’s the issues caused by economic stress coupled with the fear of lay offs.  And by the time we arrive at work or school, we’ve given up on the world’s problems… struggling ourselves to keep mental composure.

We know that our world is in trouble, that it is full of cracks… but we feel powerless to fix them, so much so, that we simply do all we can to ignore them.  We focus on our small part of the world, because that’s all the strength we have.

The world is a cracked place and the natural result of this is to feel powerless.  When we lack empowerment, even when confronted with the “cracks,” we often choose to normalize the brokenness… almost as if it doesn’t exist. 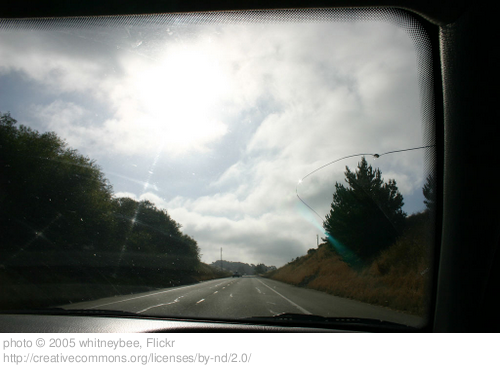 The Scriptures certainly aren’t ignorant of the fact that reality as we know it is fractured.  At the climatic point of Paul’s letter to the Ephesians in chapter six, he reminds us to “be strong in the Lord and in his mighty power.”  He adds that we also can “put on the full armor of God…”  For many of us who grew up as part of the evangelical subculture, this passage calls us to resist demonic forces that tempt us personally. The “devil’s schemes” are the things that threaten to derail us spiritually, creating moral cracks.  So, on days when temptation looms its ugly head, on the “day of evil,” we will be able to “stand.”  As we put on the armor of God, we can find victory over any sort of demonic attack from the “powers of this dark world.”

Certainly this is all true, but how does that help us deal with the overwhelming cracks in our world?  If temptation and personal demonic oppression are the only things that “spiritual warfare” are good for…  and if the cracks that we see are much broader than these issues… then, do we still remain powerless against real world types of problems?

What if the armor of God isn’t primarily an image about personal temptations and oppression, but actually is about something more?  I submit that Ephesians 6.10-20 is predominantly a text that invites the people of God to together undo evil in the world with an offensive rather than defensive posture. Consider the passage from where Paul draws much of his Armor of God imagery:

Yes, truth is gone, and anyone who renounces evil is attacked.  The Lord looked and was displeased to find there was no justice.  He was amazed to see that no one intervened to help the oppressed.  So he himself stepped in to save them with his strong arm, and his justice sustained him.  He put on righteousness as his body armor and placed the helmet of salvation on his head.  He clothed himself with a robe of vengeance and wrapped himself in a cloak of divine passion.  Isaiah 59.15-17

One of the major images that arises out of the Hebrew Scriptures is “God as warrior.”  God looks around and is “displeased to find… no justice.”  So, God puts on body armor to intervene and “help the oppressed.”  Paul invites the people of God to put on the very armor of God… in other words… the armor God wears himself! God looks around and sees the “cracks” of this world – poverty, slavery, oppression, and every form of injustice – and he passionately fights on the behalf of the marginalized!  We, then, can join up in his ongoing work of repairing cracks in our world, relying on his resources rather than feeling overwhelmed and defeated.  The world is cracked and maybe it’s time to do some repair work.

October 10, 2011
David Crowder and Rob Bell have a Jam Session
Next Post

October 11, 2011 Resource of the Week: All Right Now - A book on ethics and the Christian life
Recent Comments
13 Comments | Leave a Comment
"The motivational speaker is homest because at least they know people have to so the ..."
Critically Think What’s the Difference Between Preaching and ..."
"big fan of Boyd"
Owen W Recommended Resources: "Spiritual Warfare" Series by ..."
"Wait"
Julia 2 Reasons NOT to ‘Keep Christ ..."
"What"
Julia 2 Reasons NOT to ‘Keep Christ ..."
Browse Our Archives
Related posts from The Pangea Blog

Manual Labor As A Spiritual Practice
There is spiritual value to manual labor. Back-breaking work, on the other...
view all Progressive Christian blogs
What Are Your Thoughts?leave a comment
Copyright 2008-2021, Patheos. All rights reserved.
Close Ad