Can You Lose Your Salvation? Greg Boyd and Mark Driscoll in Dialogue

Can You Lose Your Salvation? Greg Boyd and Mark Driscoll in Dialogue October 13, 2011 Kurt Willems 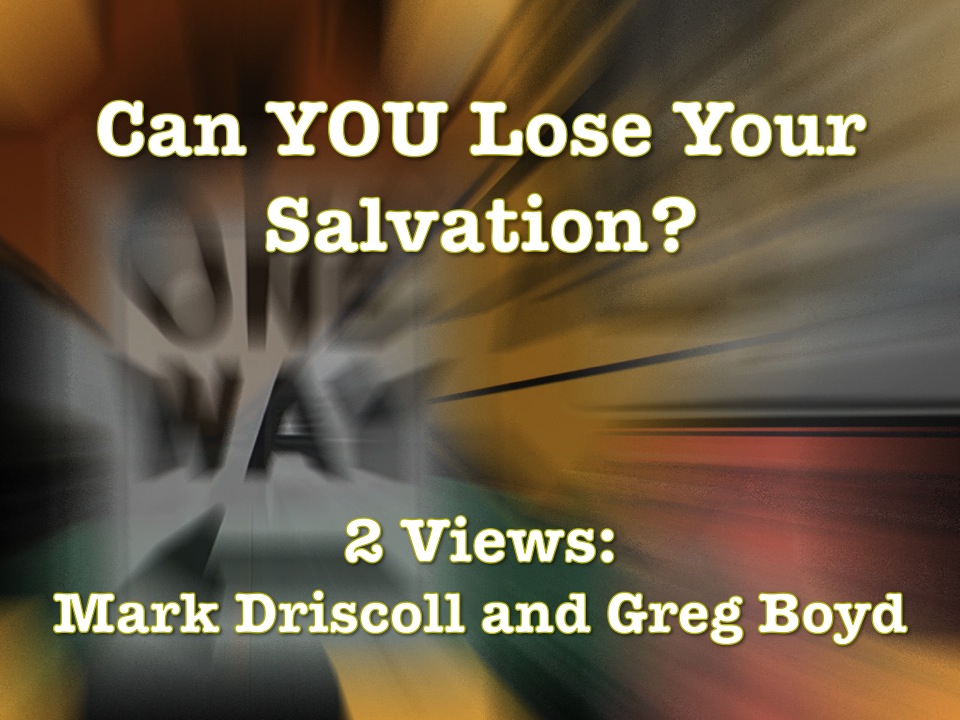 This is the age old question: Can a person lose their salvation? Of course, two broad schools of thought emerge in theological discourse.

On one end of the spectrum are the 5.5 point Calvinists (not really sure what the .5 is all about). This is representative of Mark Driscoll’s perspective (and basically most of the Gospel Coalition folks). This group of thinkers believe that God not only preordains all things (yep, every last event in world history) but that God ordains some to eternal life and some to eternal torment. They would then contend that all people deserve eternal torment and therefore the fact that God chooses some demonstrates his infinite mercy and wisdom.

And no, lets be fair to this perspective: they don’t believe that evangelism is void (as many on the free will end of the spectrum often accuse). Rather, they believe that the truly elect will hear the message (through evangelistic efforts) and will awaken to their right standing before the Father (upon repentance and a belief in the life, death and resurrection of Jesus). Evangelism matters here still because we are the heralds that God uses to summon sinners into their elect-ness. Those who refuse persistently to believe the message must not be elect. Here is what Mark Driscoll has to say about this issue:

In this next video, Mark Driscoll (although biased toward Calvinism [like I’m biased toward ‘free will’]), he describes the contrast between the two views fairly well:

On the other side of the spectrum are the “free will theists” who believe that human choice cooperates with the wooing of God toward salvation. In other words, we are lost in our sinful condition without Christ. But, in God’s grace, he has enabled humanity to rise above their sinfulness to freely choose or reject Jesus Christ as Lord. This camp (which I have always identified with, even in my more “conservative” days) believes that we can have absolute assurance of our standing with God through the process of sanctification. The more we know God, experience the Spirit, and follow Jesus; the more we are assured that we are in fact “in Christ” and therefore part of the “elect.” But, lets add one more interesting twist.

Many in the “free will” group are becoming convinced that the way we’ve appropriated the words “elect” “predestined” etc have been too individualist in nature. In other words, the more I read the New Testament through the lens of “community” the more I think that the “elect” is synonymous with “the people of God.” The Church is the elect of God! Individuals are invited to join in that “elect-ness” that indeed was “predestined.” God always knew that he would “elect” a special people. It started with Abraham, Isaac, Jacob, Moses, all the way to Jesus himself and then the body of Jesus! You are not elect… WE are the elect. An individual can choose to remove him or herself from amongst the elect (people of God) by choosing the broad road of destruction and through the blatant refusal to follow (and believe in) Jesus. We need enough humility to not “guess” who those “un-saved” people are, because God’s grace and wisdom transcend our categories. Here are some thoughts from Greg Boyd (with Paul Eddy):

Here’s one more video that’s part of the same conversation:

October 17, 2011 Beware, Or You Too May Be - Left Below! (When the Simpsons and Harold Camping Collide)
Recent Comments
41 Comments | Leave a Comment
"Wait"
Julia 2 Reasons NOT to ‘Keep Christ ..."
"What"
Julia 2 Reasons NOT to ‘Keep Christ ..."
"Only having come cross this blog today, as a South African, I would like to ..."
Keith McLachlan Name Change Myth: Saul Never Became ..."
"Growing? In my experience, these new-fangled pop-ups arrive with a $100,000 AV set-up, a rock ..."
KraigDeKompressorKruncha Sometimes Reading the Bible Literally is ..."
Browse Our Archives
get the latest from
Progressive Christian
Sign up for our newsletter
POPULAR AT PATHEOS Progressive Christian
1

Mansplaining in the Bible, and a...
Freelance Christianity