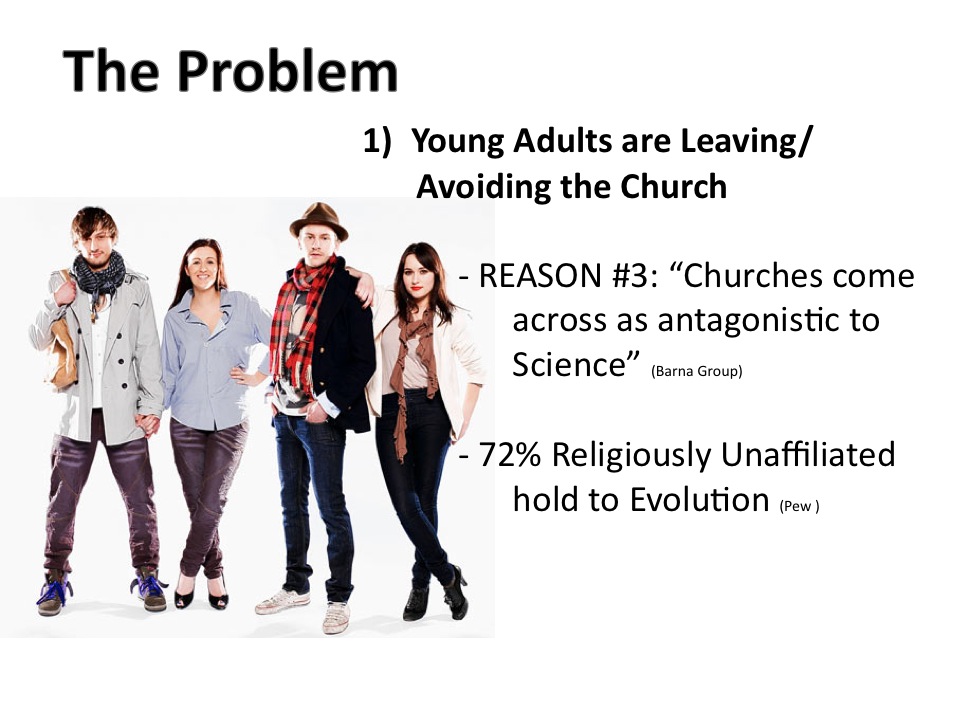 The following series is based on my senior paper for Seminary. You may remember a video where I invited people to contribute their stories to help make my case. For the next couple weeks, I’ve decided to share my findings with you all. There will be a “thesis/problem” section, a “biblical theology” section, and an “application” section. I hope you will read along and share this with others! You can read the rest of the series here.

The Problem of Young Adults Avoiding or Leaving the Church

In a recent study conducted by the Barna Group called, “Six Reasons Young Christians Leave Church,” the third reason claims, “Churches come across as antagonistic to science.”[1] Other reasons include: “Churches seem overprotective;” “The church feels unfriendly to those who doubt;” and “Teens’ and twenty-somethings’ experience of Christianity is shallow.”

All of these reasons are pertinent to this discussion, but antagonism toward science specifically highlights our concern. The study continues: 29% (three in ten young adults) feel that “churches are out of step with the scientific world we live in;” 25% dislike that “Christianity is anti-science;” and 23% are “turned off by the creation-versus-evolution debate.” The dispute between evangelicalism and evolution is pushing young adults out of the church.

The same perceptions prevail in my interactions with non-Christians. A close friend, a spiritual agnostic, has a brother intensely committed to convincing him of the error of his ways. Creationism consumes much of their dialogues. This brother embraces a seven-day creation, and has traveled to the Mecca of creation science: The Creation Museum in Petersburg, KY. This museum displays Adam and Eve in the Garden of Eden and children co-existing with dinosaurs by Eden’s Rivers.[2] After viewing the exhibits of the Earth’s supposed 6,000-year history, the brother confronted my friend with arguments for this literal approach to Genesis. My friend told me that a major turnoff to Christianity is this militant anti-science agenda. This instinct resonates with the majority (72%) of religiously-unaffiliated Americans, who believe that evolution provides the best explanation for human origins.[3]

Another friend married a woman from a traditional evangelical family. This friend is thoughtful and well-read. He worries that accepting evangelical faith would mean dismissing his intellectual integrity. Until he heard about the perspective explored in this paper, “traditional” creationism remained his one major stumbling block to Christ.

A similar scenario came up in a conversation with a single mom at my former church. She loves the church, and embraces the idea of being missional in the city and world; yet, she remains a “skeptic” regarding the full acceptance of Christ because of her beliefs about the Earth’s origins. The posture of evangelicalism toward the scientific community continues to be a stumbling block between people and a life of committed Christianity.

In my experience, some evangelical pastors are open to the idea of “theistic evolution.” While holding this perspective as a viable option alongside young and old-earth creationism, they often choose to preach and teach as though Genesis 1 is to be read as a description of how creation took place. Such pastors may never mention other faithful methods for interpreting this passage in order to avoid congregational conflict; therefore, many people in the pews assume that the traditional reading is the only correct one.

Unfortunately, most mainstream evangelical materials defend young or old-earth creationism over and against atheism. By equating evolution with atheism, members are presented with a false polarity. This environment fosters situations like the one above, where the single mom holds out as a “skeptic” because she cannot reconcile science with the Bible.

Other evangelical churches and pastors approach this issue in a more focused way. These churches are convinced that the Bible teaches a literal 7-day creation and that the world is only 6,000 years old. These same congregations may implement curriculum from organizations such as Answers in Genesis and The Institute for Creation Research. With an elevated view of modern apologetics, these churches perpetuate a false polarity as well.[4]

A recent survey is quite telling regarding general pastoral perspectives. According to a Lifeway poll, 64% of protestant pastors “strongly disagree” that “God used evolution to create people” [emphasis mine] compared to only 12% who “strongly agree.” Also telling, at least 30% “strongly agree” that the earth is 6,000 years old (16% “somewhat agree”).[5] A large number of pastors in the United States disagree with modern scientific understandings about human origins. 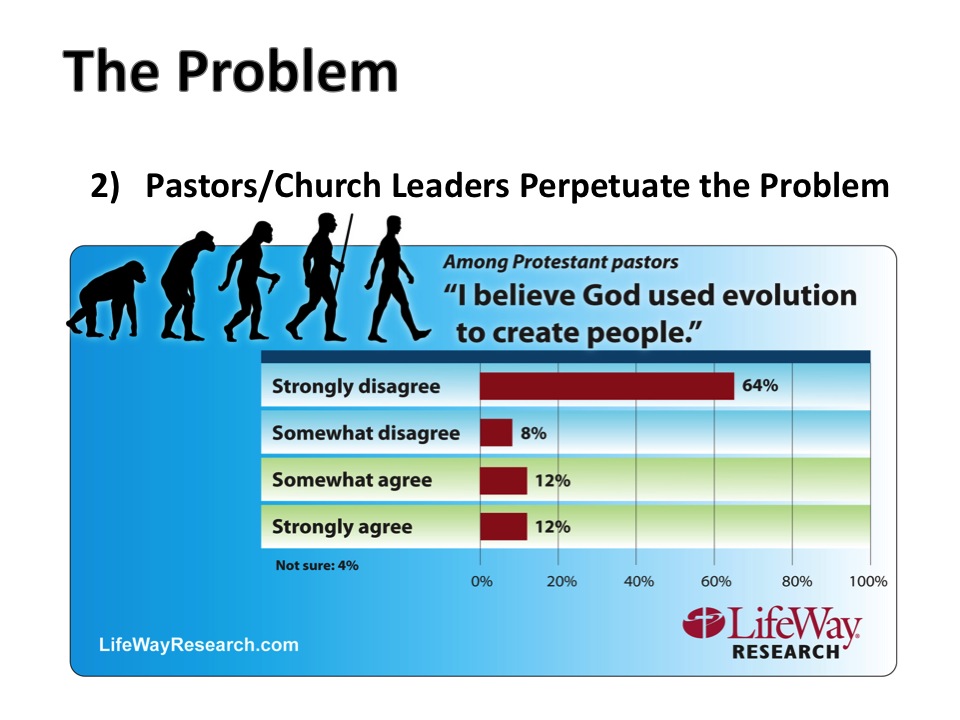 May 8, 2012 Shocking Abuses Uncovered at Tyson Pork Supplier (heartbreaking - you can help!)
Recent Comments
9 Comments | Leave a Comment
"I agree with this article, to me anything man made is pagan worship and idolatry ..."
Susan Koesters Just Jesus & Unjust July 4th: ..."
"Message needs to be heard everyday! Going thru some older emails.lol"
Douglas McCall Jesus’ Radical Kingdom Reformation within Judaism ..."
"I am a seminary student and I do not see concrete proof in a Rapture. ..."
Sagacious0ne Why the Rapture isn’t Biblical… And ..."
"Good luck on trying to politely tell those who favor Patriarchy or complementarianism that you ..."
esbee Mutuality in the Church for the ..."
Browse Our Archives
get the latest from
Progressive Christian
Sign up for our newsletter
POPULAR AT PATHEOS Progressive Christian
1