Why do (or don’t) you identify with a political party?

Why do (or don’t) you identify with a political party? November 5, 2012 Kurt Willems

It seems to me that Jesus had an interesting habit: critiquing both sides.

He was a strong critic of every religio–political party in Israel. He critiqued the Sadducees for not believing resurrection, amongst other things (one being the way in which they metaphorically got into bed with Roman Empire at times). He critiqued the Pharisees for their legalism and a neglect of the poor. And he criticized those who identified as “Zealots” for their nationalistic tendencies.

Jesus spoke truth to the divided political system of his day in Israel.

Admittedly, this is a very simple description of the situation. It is much more complex than that, as most readers will realize. But I do have a point.

I wonder if you would be willing to describe why you have registered as either: Republican, Democrat, 3rd Party, or Independent. Most readers will agree with me that neither Republicans nor Democrats or any other political affiliation in the United States actually looks exactly like the way of Jesus. There are clear deficiencies in each political platform.

So, does this reality keep you from identifying with a particular party? Does this tendency push you towards making a compromise so that you can support the best platform? What are your thoughts?

November 4, 2012
How to pledge allegiance to Jesus on Election Day
Next Post

November 6, 2012 The todays and tomorrows of this election - a reflection
Recent Comments
7 Comments | Leave a Comment
"I am a seminary student and I do not see concrete proof in a Rapture. ..."
Charles Owen Why the Rapture isn’t Biblical… And ..."
"Good luck on trying to politely tell those who favor Patriarchy or complementarianism that you ..."
esbee Mutuality in the Church for the ..."
"yup, have you ever heard a Hungarian pronounce Gyorgi? George is WAY easier. I've never ..."
RMS Name Change Myth: Saul Never Became ..."
"The usual strawmen and abysmal research from someone with an axe to grind...and still manages ..."
Sojourning Whyman Why the Rapture isn’t Biblical… And ..."
Browse Our Archives
get the latest from
Progressive Christian
Sign up for our newsletter
POPULAR AT PATHEOS Progressive Christian
1 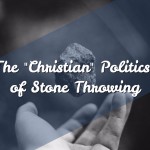