Love Without Agenda: Moving our Spiritual Goalposts from Heaven and Hell to Wholeness

Love Without Agenda: Moving our Spiritual Goalposts from Heaven and Hell to Wholeness November 30, 2012 Kurt Willems

Jimmy Spencer Jr., the founder and CEO of Love Without Agenda, has written a book by the same title. Love Without Agenda: Moving our Spiritual Goalposts from Heaven and Hell to Wholeness, is a resource that I want to share with you today.

First of all, it is astetically pleasing. Artistic touches add to each page making this a fun book to engage with.

Second, it is a book that is endorsed by folks I respect: Tony Campolo, Brian McLaren, and Andrew Marin.

Third, the content of the book is inspiring and well-informed. At the same time, it doesn’t read as “heady” but is written at a similar reading level as a Rob Bell or Shane Claiborne book. Highly informed by good theological sources but easy to move through.

One thing that I really like are Jimmy’s goals.

#1 He seeks to remain fully in the fold of orthodox Christian faith.

#2 He seeks to redefine Christianity as we know it today by the addition of practices that move us to love God and others in wholeness. These are practices that have been lost as a result of our cultural conditioning. This allows orthodoxy to remain in tact while “adding” some things that are needed to live into the fullness of Christ centered orthopraxy.

#3 He seeks to redefine Christianity through the subtraction of cultural garb that often distracts us from living the life of love that Jesus patterned for us to live into.

In identifying the above areas, Jimmy gives his book a foundation that is worth building upon.

A section of the book that really stood out to me was in the chapter titled “God plays show and tell.” The focus, here, is to see the life of Jesus as the pattern for shaping our own identity and life in this world. Unfortunately, we often use religion to give us such a pattern. Religion isn’t bad, but it must point us to the Jesus pattern, a pattern that has Jesus at the beginning and end of all things. Knowing Jesus is the telos (goal) of living and therefore we only find our own telos of maturity in God through placing our lives in the pattern of Jesus. Jesus is the one who is the full image of God, and in him we are invited to rediscover our full humaness. Here’s a quote to consider:

His [Jesus’] life was a reflection of who He was. He loved people as He encountered them, knowing they were made by Him, and not because they were going to:

Follow Him
Believe in Him
Worship Him
Love Him

A simple test to the motives and heart of Jesus: Does He still value and love the people who do not:

Follow Him
Believe in Him
Worship Him
Love Him

If you want a book that will inspire you to Love Without Agenda, this might just be the book for you.

Check out this video about the book: 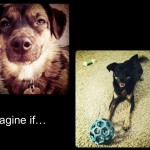 December 3, 2012 Puppies and the Kingdom of God
Recent Comments
0 | Leave a Comment
"I agree with this article, to me anything man made is pagan worship and idolatry ..."
Susan Koesters Just Jesus & Unjust July 4th: ..."
"Message needs to be heard everyday! Going thru some older emails.lol"
Douglas McCall Jesus’ Radical Kingdom Reformation within Judaism ..."
"I am a seminary student and I do not see concrete proof in a Rapture. ..."
Sagacious0ne Why the Rapture isn’t Biblical… And ..."
"Good luck on trying to politely tell those who favor Patriarchy or complementarianism that you ..."
esbee Mutuality in the Church for the ..."
Browse Our Archives
get the latest from
Progressive Christian
Sign up for our newsletter
POPULAR AT PATHEOS Progressive Christian
1