The past, present, and future of Kurt Willems (Comprehensive Enough???)

The past, present, and future of Kurt Willems (Comprehensive Enough???) April 2, 2013 Kurt Willems

What I share below is part of an interview with a local web magazine from where I grew up. I share about my life, passions, and future. I hope you will check it out.  A big thanks to Lorie Lewis Ham for interviewing me… a huge honor! Here’s an excerpt and I encourage you to read the rest of it (and all the other great content) at Kings River Life Magazine.

Lorie: Can you give us a brief over view of your background?

Kurt: I was born in Reedley, CA and raised in the Dinuba/Kingsburg area. I went to Lincoln and Grandview Elementary Schools and Immanuel Jr/High School. My home church is Dinuba Mennonite Brethren Church.

Lorie: How and when did you first feel called into the ministry?

Kurt: After flirting with a bit of lifestyle choices that didn’t line up with the Way of Jesus, I had a “turn around” experience on a mission trip to Mexico during the Spring Break of my sophomore year. Must have demonstrated a real change because that summer I was invited by my youth pastor to do my first act of ministry: counseling kids at summer camp. This experience made it clear that I enjoyed serving. Then, a couple of weeks later, I went to Hartland Camp as a “camper.” On the final night, I had a clear experience with God where I sensed a call to vocational Christian ministry. It was a night filled with tears of joy, visions, and affirmation. My life direction has never been the same. God continues to affirm this call, even through some difficulties in the journey.

Lorie: How/when did you get involved in blogging?

Kurt:I fell into blogging. I literally didn’t even know that “blogging” was a big thing. In 2008, shortly after beginning my seminary studies (Fresno Pacific), a friend told me that “anybody who’s anybody writes a blog…my dad just started one…you should start a blog!” Well, I didn’t take it too seriously and started out by copy/pasting seminary papers and using them as blogs. Eventually it took off, even after several significant breaks in writing (sometimes up to six months). I’m so blessed to have a platform for sharing my ideas with folks around the world and learning from so many of them through the dialogue the blog creates.

Lorie: Who would you consider your biggest influences theology wise?

Kurt:I would say that I have several theological influences. But, I can narrow that group to a few (for the sake of brevity). My greatest influence is N.T. Wright. His understanding of the New Testament as rooted in a specific historical context and his emphasis on the Christian hope as “new creation” rather than ending in some disembodied place in the sky called “heaven” changed my life. The final hope of all things is the bringing of heaven to earth when Christ returns to resurrect, judge, purge, and restore creation to its intended glory. The Bible often calls this “new creation” or “new heavens and new earth.” The ramifications of this are huge (but, I will leave the readers to explore this rather than get too into preacher mode). I would also add Greg Boyd to the list. He has been a great encouragement as I’ve embraced my Anabaptist roots of radical enemy love, social justice, nonviolence, and the subversion of empire. He has also given me the courage to remain thoroughly committed to charismatic spirituality and orthodox Christian faith. Add to this list: Richard Hays, Peter Enns, Walter Wink, Mark Baker, Tim Geddert, Walter Brueggemann, John Howard Yoder, and an endless list of others.

Lorie: Any plans for a book?

Kurt:Yes. This has been a long journey. At the moment, I’m waiting to hear back from several publishers about my book proposal. I’m hoping for some good news in the next several weeks. It will be based on many of the “big themes” on my blog. Regular readers will not be surprised when I finally leak the theme of this book. I can’t wait! 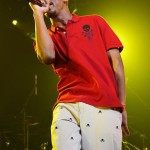 April 1, 2013
America’s Unforgivable Youth: What Lupe Fiasco can Teach the Church
Next Post

April 12, 2013 Philip Yancey on Brennan Manning on the day of his passing
Recent Comments
1 Comment | Leave a Comment
"Message needs to be heard everyday! Going thru some older emails.lol"
Douglas McCall Jesus’ Radical Kingdom Reformation within Judaism ..."
"I am a seminary student and I do not see concrete proof in a Rapture. ..."
Sagacious0ne Why the Rapture isn’t Biblical… And ..."
"Good luck on trying to politely tell those who favor Patriarchy or complementarianism that you ..."
esbee Mutuality in the Church for the ..."
"yup, have you ever heard a Hungarian pronounce Gyorgi? George is WAY easier. I've never ..."
RMS Name Change Myth: Saul Never Became ..."
Browse Our Archives
get the latest from
Progressive Christian
Sign up for our newsletter
POPULAR AT PATHEOS Progressive Christian
1

Beth Moore And The Bible: It...
The Thoughtful Pastor