God Doesn’t Give a ______ about Cussing–God Cares about Character Formation August 27, 2014 Kurt Willems 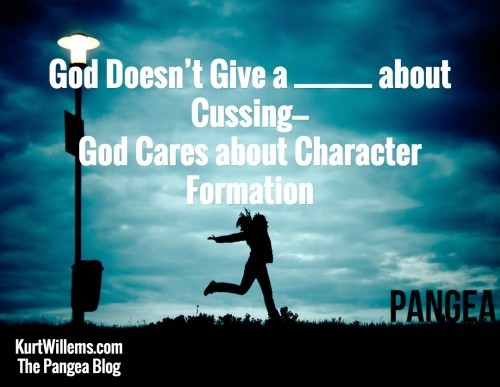 As a younger Christian, I judged people. A lot. I didn’t know that I was casting judgment…but I was. I’d hear a “bad word” and would think (especially if they went to church): They must be really struggling in their relationship to the Lord.

I had similar beliefs about drinking and smoking. How could one follow Jesus and engage in such vices?* Little did I know that I was measuring the wrong kind of score card for spiritual maturity.

I’m convinced more than ever that God doesn’t give a ______ about cussing (or drinking, dancing, smoking, etc.)–but that God ultimately cares about the transformation of our character.

In this post, let’s take on one of these morality score card issues biblically. Then, perhaps we make more room for a score card that isn’t so easily quantifiable. Maybe the word score doesn’t even fit. Character transcends our typical metrics for who’s holy… for who’s moral… for who looks like Jesus and who doesn’t.

As a kid in youth group culture and private Christian school, these words from Paul were quoted again and again regarding cussing: “Do not let any unwholesome talk come out of your mouths…” Most of my life I interpreted those words through my modern church culture lens. “Unwholesome talk” equals any four-letter-word, words containing hockey sticks, Rated R words, and anything that home-school parents would deem naughty.** To utter them demonstrates that a person lacks character and isn’t authentically pursuing Christ.

What actually determines the definition of “unwholesome talk”? Does the popular culture? Does the FCC? Nope. The answer comes in the second half of the statement: “…only that which is good for building others up according to their needs.” This statement both relativizes cussing (meaning that black-and-white definitions aren’t helpful) and invites contextualization.

One test, then, is: Does using this word tear someone down or build up? If it doesn’t tear them down (because it is part of a language they understand) then we ought not live in a legalism that the Scriptures don’t impose. Saint Paul certainly didn’t.

In Philippians 3.8 Paul says that he considers all things as “rubbish” or “garbage” or “dung” or “loss” compared to the greatness of knowing Jesus. This word (skubalon) is only used once in the New Testament. And yes my friends, that word is a first century cuss word. Here’s its full definition:

skubalon – In secular Greek this depressing word means rubbish and muck of many kinds: excrement, rotten food, bits left at a meal as not worth eating, a rotting corpse. Nastiness and decay are the constant elements of its meaning; it is a coarse, ugly, violent word implying worthlessness, uselessness, and repulsiveness... The only NT usage is Paul’s in Phil 3:8, where he says of all the natural and religious privileges which once seemed sweet and precious, and all the things he has lost since becoming a Christian, “I count (estimate, evaluate) them as (nothing but) dung.” The coarse and violent word shows how completely Paul had ceased to value them. [New International Dictionary of New Testament Theology Vol. 1, Zondervan: 1980, pg 480]

If the Apostle Paul (the one from whom we get our call to not use any “unwholesome talk”) uses a word that is equivalent to many of our four-letter-words, then why do some Christians allow such speech to be the criteria for one’s character?

Character formation has everything to do with Christ shaping our inward realities so that our natural impulses lead us to Christlike actions. Certainly there are some curse words that would disrupt this process. I’m thinking here of words that are rooted in hatred, discrimination, and sexism. Those sorts of words are inconsistent with the discipleship journey when they are rooted in “othering” or “hatred.” Anything that dehumanizes someone whether in physical or verbal violence contradicts the way of Jesus. Dehumanizing words are what I believe the New Testament is strongly speaking against. But, many of the casual cuss words of our day do not carry that sort of meaning. They are simply ways of expressing one’s self.

Ok–I know what some will say in the comments below. “Whenever someone cusses it becomes clear to me that they don’t have the intelligence or are too dumb to choose their words wisely.” Seriously? An intelligence issue? Wow… I would say that mocking someone’s intellect might actually fit the categories of “unwholesome talk” more than typical cuss words. Perhaps saying something as judgmental as that is actually similar to what Jesus warns against: saying “racca” or “you fool!” Again, we need to think critically about how we approach issues like this or else we fall into judgmentalism unbecoming of a follower of Jesus. In so doing, we may damage our own journey towards Christlikeness.

On the other side of things, we need to be careful to see how certain ways of communicating can become habitual (for those who may use “cuss words” at times). We should always check our motives and avoid becoming addicted to certain words that may put others off. Tone and context matters too. Poor habits can become character issues just as much as judgmentalism.

Hear me clearly: I don’t think that we need to be known as “cussers” as Christians. And, this isn’t a mere dismissal of the Bible (I embrace every passage having to do with speech). However, cussing shouldn’t be a main criteria for determining if someone is sincere in their commitment to God. Which words are “bad” and which words are “good”?–we do well to use discernment. With that said, I do believe there’s something wrong when my non-Christian friends feel the need to apologize when they slip the F*Bomb in the conversation. My response is always: Please, please, please feel free to be exactly who you are around me! Your language doesn’t offend me or make me see you in a bad light. I’d rather get to know the real you.

And it shouldn’t only apply with people who aren’t followers of Christ. What about authentic Christian community? Although it would be taboo in most small groups in the American church, I want to be in a Christian community where I won’t get glaring stares because I referred to my friend dying slowly of cancer as bullshit. Paul considered his past life to be skubalon, cancer is skubalon too.

So, what are we to do with cussing as it pertains to character? Let’s be sensitive to those who need us to be sensitive while also being authentically who we are in Christ. Sometimes skubalon is the only word that expresses the depths of our hearts. Paul got that. Jesus gets that. Maybe it’s time we get that. It’s time to change the morality score card from a list of do’s-and-dont’s to the reality of a life being shaped by God from the inside out. Character formation is at the heart of the Christian life–not a culturally conditioned morality checklist.

*On smoking and drinking. Certainly there are discipleship ramifications for these when not kept in check (but, even here we need to discern wisely). Here, I’m referring to the simple act… even when done in moderation.

**This isn’t a blanket jab at all homeschool families. In the culture I grew up in, homeschool often also meant ultra-conservative–but this isn’t always the case.

August 28, 2014 Ed Young to Preach a Series on "Drones"
Recent Comments
2 Comments | Leave a Comment
"I am a seminary student and I do not see concrete proof in a Rapture. ..."
Charles Owen Why the Rapture isn’t Biblical… And ..."
"Good luck on trying to politely tell those who favor Patriarchy or complementarianism that you ..."
esbee Mutuality in the Church for the ..."
"yup, have you ever heard a Hungarian pronounce Gyorgi? George is WAY easier. I've never ..."
RMS Name Change Myth: Saul Never Became ..."
"The usual strawmen and abysmal research from someone with an axe to grind...and still manages ..."
Sojourning Whyman Why the Rapture isn’t Biblical… And ..."
Browse Our Archives
get the latest from
Progressive Christian
Sign up for our newsletter
POPULAR AT PATHEOS Progressive Christian
1