I have written last year, and perhaps the year before, that I am a great lover of the game of baseball. I watch other sports, but baseball has always been my first love. Football is a violent game for furiously huge men whose blood and sweat define the outcome of the game. I could never play football, because I am and always have been far too small and far too timid. Basketball is for freaks of nature, gigantic men, and now women, who are the best athletes on the planet. I do enjoy watching these superb specimens of man and womanhood run, jump, and shoot, and in the case of the men stuff the ball with two hands from impossibly high trajectories, but I could never do any of that either, so I can only view the sport from afar, as if I were in some zoo for genetically engineered giants. But baseball, ah, baseball I can and did play. My favorite player, the incomparable Willie Mays, was actually smaller than I was as an adult, and yet demonstrated his vast prowess for 22 seasons, a true multi-tool marvel: run, hit, catch, throw beyond any of his or any other era.

I understand that part of my adoration of the game of baseball is a generational thing. I am nearly 73 years old, and grew up in the heyday of the sport, the 1950’s and 1960’s, when baseball was truly the national game. The fact that that is no longer the case speaks to the changing nature of our society; we are now more angrily competitive, hence the fury of football rather better speaks to our violent and cut-throat mentality. I have a hard time believing that a man like Donald Trump, a violent and angry misogynist and narcissist, could ever have been elected to any public office in the 1950’s, let alone become the President of the USA. And given our spectator culture, where many would rather watch than participate, basketball fits that bill, since people like me can only watch and never really play seriously a game designed for giants only. Perhaps the greatest pure shooter in NBA history, Stephen Curry, is still 6’3”, hardly an average sized man.

But baseball, ah, baseball! I cannot only watch baseball; I can play baseball, knowing that strength and size do not define the quality of a player. Coordination, speed, hand-eye reflexes, all these are crucial for a good ball player, and are not based on height or weight. 300 pound offensive linemen need not apply! 7 foot centers are likely not eligible for baseball greatness! The game is played by those with whom I can truly identify. Oh, I know I could never have played in the major leagues, despite my dream to do so, but I can understand what it takes to make it to the majors, and for that reason, once again, I am about to go to Spring Training in Phoenix to watch my pathetic, but still beloved, Texas Rangers. Though I now live in the land of the dog-butted Anaheim Angels, bitter rivals in our western division of the American League, and the LA Dodgers, two-time world series losers from the National League, my heart is still with the Rangers. They will not be good this year—even the most diehard fan must admit that terrible fact—but I will follow them still, right into a meaningless September, because I love baseball and the Rangers who play it.

OK, now why talk about baseball in a blog by an overtly religious writer? Today, I have decided that there is a quite close analogy between the doing of theology and the playing and appreciation of baseball. This appears to be a stretch, but I hope to show that is not that long of a stretch, nothing like the stretch a first baseman makes to catch a runner by the tiniest of margins on a throw from the hole by a strong-armed shortstop.

The doing of theology includes both precision and intangibles. I must read my Bible with great care, must allow the words to be understood as well as I can. I must read widely and deeply in the traditions of the church, must take seriously the readings of the Bible and other ancient documents made by large numbers of faithful persons through the ages. And I must examine the most cogent and modern elements of my own culture to see what bearing they may possess to underscore my belief or to call that belief into question. And my Christian experience, my life of prayer, church attendance, service to the community, among other facets of my life in and around the church, also play a role in how my faith has been formed, and is being formed, and how I am able to talk about that faith to others and to myself. That is the precise part of the doing of theology.

The intangible part has to do with my interactions with my God and the world that cannot be easily and readily understood and communicated. Faith inevitably has a “woo- woo” quality to it; it cannot all be reduced to formula or creed. I may know an action of God when I see it, but someone else may see the experience in completely different ways. Who is to say which of us is correct? The language of right and wrong in these cases may be fully inappropriate.

So it is in baseball. Baseball has now entered the age of metrics where players are often evaluated in statistical ways unheard of in earlier times. No longer are simple statistics—runs batted in, home runs, batting average—the real measure of the value of a player. Now we read of WAR—wins above replacement—and spin rates on curve balls, and runs scored in which innings. There are literally reams of information bits like these that now clutter the offices of every big league manager. Those minute factoids are the precision part of baseball. But there are scads of intangibles, too. How does one measure hustle and team support and attitude and love of the game? And what about the imprecision of the umpires? Balls and strikes remain judgment calls, and a game never lacks for calls that a pitcher is sure that the plate umpire missed, and though now there is instant replay to review close calls on the bases, and catches or non catches in the outfield, there are still calls that could go either way, no matter how many camera angles are viewed. Those are the perpetual intangibles and constant imprecision of baseball, and I love it all the more for them. The bases may be exactly 90’ apart, and the pitcher’s rubber precisely 60’6” from the front of home plate, but the two-eyed umpire will still “calls ‘em as he sees ‘em,” and I hope that never changes (though my 44 year old son becomes irate at what he perceives to be missed balls and strikes and longs for the day of a machine to increase precision—I do not). Like theology, baseball includes clarity and cloudiness, certainty and uncertainty.

And so I will again go to Spring Training, reveling in that game I have loved since I was a very young boy, certainly now for 65 years. And the game I see will have superb athletes, not freaks of nature, and it will include objective and subjective elements, both of which make up the beauty of the game. And in that subjectivity and objectivity I will see a mirror of theology, my other life-long quest. And God looked at the doing of

theology and the playing of baseball, and behold, they were alike and were very good. Who could ask for anything more? 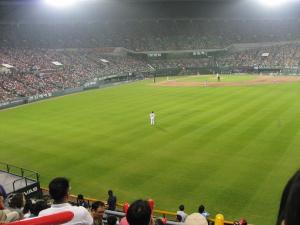