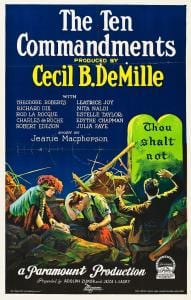 For those of you who read my musings more regularly, you remember that I took II-Isaiah to task a few weeks ago due to his conviction that YHWH was omnipotent, the author of all actions in the universe, both good and bad. I found that problematic, especially for those of us doing theology in the 21st century. An omnipotent God leaves us with the vast problem of divine culpability for the world’s evil—of which there seems to be no end. Either we blame God in a Job-like fashion or we defend God with clever, if finally empty, arguments. I suggested that we do neither, and agree that God is in fact not omnipotent in the classical sense. No, I do not intend to argue that contentious point in this essay, you will be either glad or disappointed to know.

Rather, I want to reflect today on something that is especially germane to Lent, namely the relationship between the present and the past, particularly as that has to do with the actions of God. This passage is the classic example of the Bible’s struggle with that complex relationship.

The Bible majors in concern for the past. I had a professor in seminary who announced to us that the Hebrew Bible could be summarized in one trenchant phrase: “Do it again, YHWH!” The prophets and psalms most especially do seem to hark back to the prior actions of God, conspicuously the creation of the world, the parting of the waters at the Sea of Reeds, the wandering in the wilderness and God’s provision there for Israel’s survival, the giving of the Torah at Sinai, and the gift of the Land of Promise. These theological-historical events provide the backbone of a portrait of YHWH, and as my professor put it, “What you have done in the past, O God, do it again now for us!”

And so Isaiah follows that familiar pattern in the lection for today. “Thus says YHWH, who makes a way in the sea, a path in the mighty waters, who brings out chariot and horse, army and warrior; they lie down, they cannot rise, they are extinguished, quenched like a wick” (Is.43:16-17). YHWH is known and recognized by the defeat of the unconquerable Egyptians at the sea; YHWH “made a path through that sea,” insuring Israelite safety and salvation, and reminding all of the creation of the world and its division of waters in Genesis as well as the division of the waters of the Jordan to allow the entry into the Land of Promise. YHWH is forever in the business of controlling waters, impediments that must be overcome in order that Israel might fulfill its destiny as the people of God. This special memory is the bedrock of Israel’s existence and forms the basis of the first commandment: “I, YHWH, brought you out of the land of Egypt, out of the house of slavery.” This, of course, is not a commandment at all; it is a proclamation of the central truth about YHWH who is a God who brings all out of whatever slavery they find themselves in. YHWH is a God of freedom for all people.

Little wonder that the next verse is so surprising: “Do not remember the former things, or think of the things of old” (Is.43:18)! What? We are to forget the awesome actions of YHWH at the sea, that event that changed us from helpless Egyptian slaves into the free people of YHWH? Surely, Isaiah does not wish on us a kind of theological amnesia wherein we face our present without any notion of what YHWH is capable of doing on our behalf now? I doubt the prophet has that in mind. What he certainly means by forgetting the past must be rather more like do not dwell on the past, for excessive attention to the past holds several dangers for the present. I can easily think of two.

First, living only in the past avoids whatever new work of God may be afoot. Once again, as a United Methodist clergyman, I am reminded of our recent tragic called General Conference. The winning vote for the Traditional Plan leaves us stuck in some past state, where the new work of God with our LGBTQIA siblings was incapable of being appreciated and acknowledged due to looking merely at a past of exclusion and only to ancient ways of evaluating scripture and tradition. Is.43:19 had no place at that conference: “I am about to do a new thing; now it springs forth, do you not recognize it?” The traditionalists at the conference did not; they observed only a God of the past, a God incapable of a genuinely new thing. For Isaiah, to think that YHWH only performed great deeds in some ancient times, and is not still acting now in fresh ways, would doom the exiles in Babylon to a truncated future wherein they would remain in the great eastern city, cut off from their longed-for homeland.

The second danger of dwelling only in the past is the inability to see what new duties that our own time requires of us. YHWH, says Isaiah, will now “make a road in the wilderness, rivers in the desert,” a place where “wild animals will honor me, even jackals and ostriches” (Is.43:19-20). The latter two animals named are usually associated with places of ruin and excessive waste, devoid of human habitation. But the new thing of YHWH will now include even those creatures in the group that honors YHWH. If I think only of the world that I have already observed, assuming it is the model for my future world with God, I cannot conceive of a brand new place where roads lead through the desert, where rivers traverse the blasted desert wastelands, where jackals and ostriches are no longer outcast beasts but now spend their days honoring God. The past can be a straightjacket against the freedom of a new future.

Would that the general conference of the United Methodist Church had read and contemplated this wonderful text from Isaiah! They would have been reminded that YHWH is never stuck in the past, never forbidden to break open old ideas, never limited by our lack of imagination of something really new. As a result, those of us who have tried to open ourselves up to the new things of God have been sidelined and rejected by those whose vision is limited and clouded by the conviction that God cannot and does not act in ways that they cannot conceive. But Isaiah is surely right! YHWH is forever doing new things, and those new things are forever springing up in our midst. It is up to us to see those new things, to observe them, to cherish them, and to follow where God leads.

March 19, 2019
The Peripatetic Preacher Goes to Spring Training
Next Post