In this third installment of my series on the book of Revelation, I want to focus my attention on the text in Rev.7 within the context of the next several chapters, since the ongoing drama of the book cannot be evaluated without a longer look than one part of a single chapter. Commentary on Revelation has been vast and quite distinctive, moving from the notion that the book presents a cyclic movement of repeated ideas for emphasis to one where the entire book is one long dramatic arc. My own view falls somewhere in the middle of those extremes; I can readily see the repetitive nature of several of the images and numbers, yet I do not think that repetition voids the long arc of the whole. Thus, I suggest that the parts cannot be fully appreciated apart from some sense of the whole.

In chapter 7, John presents an interesting portrait of the host of heaven. In chapter 6, he has opined that only 144,000 people will find their way to the heavenly court, precisely 12,000 per the number of the twelve tribes of Israel. It is this figure that prompted William Miller to predict that merely that number will be enabled to enter the heavenly reward, and asked his followers to meet him on a mountain and await the return of Christ, finally and precisely determined to happen on Oct.22, 1844. When it did not occur, the great majority of Miller’s followers merely stopped believing in the Second Coming of Christ, but Miller never did, and as a result spawned several denominations still quite active today. The Seventh Day Adventist movement boasts over 19,000,000 members worldwide. Obviously, Miller saw the figure of 144,000 as allegorical, and continued to believe that his calculations about the future return of Christ were perhaps first inaccurate but ultimately not futile.

In any case, Rev.6’s precision gives way in Rev.7 to a very different picture. “After this,” says John, “I looked, and there was a great multitude that no one could count, from every nation, from all tribes and peoples and languages, standing before the throne, and before the Lamb, robed in white, with palm branches in their hands” (Rev.7:9). This is a rich portrait for several reasons. Note first that John says the number in the presence of God and the Lamb is now so numerous as to be uncountable. The claim that many denominations of Christians over the years that only a select few will ultimately find favor with God is plainly rejected here; in the presence of God there will finally be a multitude beyond number. Second, this vast multitude will come from everywhere, not just from recognizable groups or familiar people that we might immediately know. They will represent every nation, every tribe, every people, every language. It remains incomprehensible to me that so many Christian believers continue to limit the scope of God’s mercy to persons they find identity with and have a terrible time including in God’s care people who are not from their nation, not from their special tribe within a nation, not speaking their particular language. Finally, the fact that this huge crowd has palm branches in their hands is a reiteration of Jesus’ triumphal entry into Jerusalem, according to John’s gospel (a different John to be sure), just before his trial and execution. Now that Jesus has triumphed, and is with God in heaven, the waving of the palms suggests that his triumph at his death was a real triumph after all.

At Rev.7:13 one of the elders who sits around the throne of God asks John just who he thinks this enormous, numberless crowd may be, and John is unable to respond, saying that surely the elder alone knows. His answer is instructive: “These are they who have come out of the great ordeal; they have washed their robes and made them white in the blood of the Lamb” (Rev.7:14). We must ask now what is the “great ordeal”? Surely it must be the socio-theological context of the time of John’s composition. The reality is that Rome controls the world and all who live in it, but John’s conviction is that God in a hidden reality, the only genuine reality, actually controls that world. The great ordeal then is the struggle that John sees between those who have given in to Roman power over against those who both speak and act against it. Jesus in his innocent death and his triumph over death in his resurrection becomes for John the very model of those who ultimately find the favor of God. As Jesus was willing to go to his bloody death so must his followers be willing to give their lives for the world and reject Roman power for the sham that it is.

And that leads us to a crucial question about just how Christian power and triumph are to be expressed. John says here in Rev.7 that the multitude who crowd around God’s throne are there because they have “washed their robes” in the blood of Jesus. This grim image can be heard in two very different ways. It could be a call to martyrdom, to follow Jesus to the cross if need be, to express one’s faith in a relentless rejection of Roman law and authority and thereby risk death as a result. That might be called the militant reading. On the other hand, it might be heard as a call to deny self as Jesus did, to peacefully and willingly give one’s life for the cause of the unity and wholeness of the world, not to fight against the Romans but to stand up to them in unyielding peace. Which of these images one chooses depends on whether one believes that the slain lamb image of Rev.5 alters the warrior Jesus image of Rev.19 or the other way around. I have already suggested in my commentary on Rev.5 that I think the lamb image counters the war-like image of Rev.19. Thus, I believe that John is urging his followers to eschew attempts to defeat the Romans in some physical conflict, as well as to reject images of Jesus as warrior who will come to wipe the world clean of his enemies in a final confrontation of one kind or another.

I would suggest that John’s war-like imagery, of which the book presents ample examples, are in fact images that speak against war and against fighting for the faith. One washes one’s robe in the blood of Jesus not by creating more blood, or even by shedding one’s own blood in the cause—though that may be required—but by denying the power of violence to accomplish the victory of God. Violence is the Roman way, not the Christian way. The early African-American civil rights movement is one clear example of what John was calling his followers to do. Peaceful and persistent protest wins the day, though it is hardly without risk, as the deaths and bloody struggles of many in the south indicate all too clearly. As the book continues its dramatic movement, we will see just how this call for peaceful yet persistent protest is John’s way of facing up to Roman power and thereby the way to win the crown of life with God. 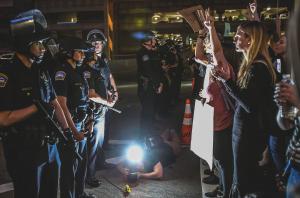 April 23, 2019
The Peripatetic Preacher: Climate Change and the Bible (1)
Next Post