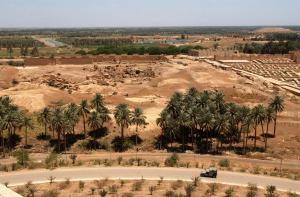 Jeremiah is certainly the most surprising prophet in the Hebrew Bible. He is forever saying things that few if any wish to hear; he is continually offering advice and command that flies in the face of what anyone expects; he makes claims that are little less than bizarre, laughable on their face. Buy land while Jerusalem is about to fall, he says (Jer.32); remember that you are merely cracked pots, clay in the hands of the artistic creator of the world (Jer.18); “gosh I only wish you were right, Hananiah, about what is about to happen, but alas, you just do not know what YHWH is doing at all” (Jer.28)! You surely never want to invite this prophet to a dinner party: he will ruin it for you fast with all that “doom and destruction” chatter. Jeremiah is unmarried and friendless, and no one should be surprised—he is a most peculiar and prickly fellow!

And chapter 29 finds him in his usual modus vivendi. He, and all those who remain in the city of Jerusalem, after the assault of Nebuchadnezzar and his troops, have just witnessed not only the sack of the beloved city, and not only the murder of the sons of King Zedekiah, and not only the cruel blinding of the king, but also the burning and robbing of the holy Temple and the razing of the palace of the king. A long line of royal courtiers and their retainers, bound and helpless, has just stumbled out of the city on their way to the vast and forbidden city of Babylon, a long 400-mile march eastward through mountains and deserts, ending in a ghettoized exile in that great metropolis with small future and smaller hope. The fabled gates of Ishtar will swing wide, and the cream of Judean society, the last vestige of all the promises of YHWH for land, king, temple, and priesthood, will be swallowed up forever. Among that ragged group of Israelites, one will soon write, “How can we sing YHWH’s song in a foreign land,” and his answer will be in effect, “we can’t!” We must hold on to our past, our beloved Holy City, our long- promised land, our Davidic king, our well-trained priests. Surely, YHWH has not forgotten us, has not reneged on those ancient promises, will quickly return us to all we have known and revered in Israel.

Without doubt, certain so-called prophets left in Judah echo these shallow hopes with loud and deeply religious proclamations. Like Hananiah, they predicted a brief sojourn in Babylon for the king and his court, a year or two of unpleasant house arrest, a short time of separation from the land of promise, followed by a triumphant return to Jerusalem, a reconstitution of all YHWH has made plain for centuries. This same chapter recounts that a certain Shemaiah writes just such a letter to the exiles, suggesting a brief time in Babylon and a safe return home (Jer.29:24-28).

But Jeremiah will have none of such Pollyanna proposals, such easy predictions about the future of those in Babylon. To the contrary, he pronounces that all you who have gone off to Babylon should be prepared for a lengthy stay, as much as 70 years, fully two generations at least. That claim is bad enough, but Jeremiah does not stop there. Not only may the exiles expect a long stay in the foreign capital, but he urges them to “build houses and live in them; plant gardens and eat what they produce. Take wives, have sons and daughters; then take wives for your sons, and give your daughters in marriage that they may bear sons and daughters; multiply there; do not decrease” (Jer.29:5-6). In other words, live your lives in Babylon just as you would live them in Judah. Please note that Jeremiah does not say take only Israelite wives for your sons. Is it possible that he implies that Babylonian intermarriage may occur, and that would not be automatically a bad thing? After all, for Jeremiah, the central thing is that Israel must increase, not shrink; it must look to its future, not to some now lost past in which it may live.

And then he adds the most surprising demand, and surely the most controversial one: “Seek the shalom of the city where I have sent you into exile, and pray to YHWH on its behalf; for in its shalom you will find your shalom” (Jer.29:7). Pray for Babylon, says Jeremiah. Pray for Pyongyang; pray for Moscow; pray for Beijing; pray for Teheran. Pray for your enemies, says Jeremiah, echoing a much later Jewish prophet who commanded the same thing. Yes, I recognize clearly that Jeremiah’s demand for prayer for Babylon is a practical one; if Babylon prospers, then the exiles of Israel can also prosper. Yet, still to call for prayer for the hated Babylon, that ruthless nation that has just brought destruction to your beloved city, is a radical demand indeed.

Not unlike the Israelites of Jeremiah’s day, we live in a world filled with hatred of all sorts, a world divided by class, race, gender, nationalism, and in many other ways. There are finally only two ways that hatred can be defeated. For centuries, we humans have chosen the least successful of those ways, namely violence. Humans have long met violence with more violence, and the result has been still more violence, made far more deadly by weapons of horror, hatched from the brains of talented technicians whose ingenuity has far outstripped their morality. Once again in 2019 we stand at the brink of self-annihilation, with numerous nuclear warheads aimed at one another’s cities and peoples. If we do not burn ourselves in our rising temperatures, or drown ourselves in our rising seas, we may just incinerate ourselves in our mushroom clouds. Violence, however it is wielded or by whom, is simply not the solution.

The only sure cure for violence is a steady and persistent love. Love remains the most potent force in this and any other universe; it has been given to us by the God who made us all as the way to live together in justice and peace. When Jeremiah bids the Judean remnant to pray for the shalom of Babylon, he is saying that only the love of Babylon will lead to the shalom of the exiles within it. Bellicosity, fueled by hatred and nationalism, can never lead to anything but more hatred and violence. Whatever else John 3:16 means for us Christians, its claim that “God sent Jesus to make us all whole again” (usual reading to “save” us) suggests that love is the answer to our brokenness and divisions. And love means praying for enemies and persecutors, conquerors and bullies. With Jeremiah, I suggest that we all pray especially for those we find dangerous, obtuse, detestable, horrifying, and appalling. I try to do that each day, however hard I find that to be. After all, I can only include those whom I know to be children of God, and unless I seek their welfare, I can never see them as such children. Odd old Jeremiah had this right; pray for the shalom of Babylon. And so I will try to do.

Top Ten Reasons NOT to Go...
The Desert Sanctuary
Related posts from The Peripatetic Preacher