The Peripatetic Preacher and the Narrative Lectionary Mark 4:1-32 January 19, 2020

There is something distinctly hilarious about this portion of the Gospel of Mark. No, the parables found here are not in themselves funny ones, though they are certainly enigmatic. What is funny is the relationship Jesus has to the use of parables, and his apparent conviction that while his common listeners are very unlikely to understand what he is talking about, his disciples, his inner core of followers, will surely be on board with what Mark calls “the secret (literally “mystery”) of the rule of God.” It is funny indeed that the disciples are at the same time eager to understand and clueless! Just why does Mark write like this, at the same time supposedly revelatory about who Jesus is and what he has come to do, and essentially masking the answers to the questions, even to those who are supposed to comprehend fully what is going on? Part of the wonder of Mark’s work, and certainly the deep pleasure of it for us moderns, is to be found in this central conundrum. Mark reveals and conceals all at once!

What is the point of this literary strategy? Mark is clearly up to something, but what that is will take some time to clarify and to understand. In fact, we may not fully grasp what he is doing until we read his entire work. Perhaps not until we experience his astonishing take on Jesus’s resurrection, and the women witnesses’ response to it, will we catch a glimmer of Mark’s intentions for us. For now, we need to examine, however briefly, how he manipulates his plot to lead to his revelations and his concealments. In Mark 4, he turns to Jesus’s use of parables to demonstrate his unique way of writing a Gospel.

At the end of Mark 3, we are told that the command to follow Jesus includes even the necessity of exchanging one’s biological family for the larger family of followers. Listen to the radical words of Jesus when he is told that his own mother (Mary, we presume, though not named here), along with his brothers and sisters, have come to witness what their wayward son and sibling is up to in his ministry (Mark 3:32). His answer is particularly harsh: ‘Who are my mother and my brothers?’ And looking at those who sat around him, he said, “‘Here are my mother and my brothers! Whoever does the will of God are my brother and sister and mother’” (Mark 3: 33-34). When faced with the pressing demands of the gospel, as outlined in Mark 1:15, the new family of the realm of God is now defined as those who do God’s will; biology may have nothing to do with this new way of God as announced by Jesus.

And with that hard word, he continues to teach by the sea, but the crowds are again so large that he was forced to get into a boat, and move out into open water in order that the assembled masses still on the shore can all see and hear what he has to say. He launches into a parable, one of his preferred means of teaching. At this point, it is crucial to remember what parables are and aren’t. They aren’t “earthly stories with a heavenly meaning,” as an older generation of readers was fond of saying. They do not make “one point” only, so to reduce them to saying “one thing through story” will not do. Parables are decidedly odd; they are designed to tease the hearer into active thought, to help her to see the world in different ways, to aid him in altering his lens concerning how to live and how to perceive what God ‘s will may be. This first parable for Mark has to do with the common work of a farmer, but this is no ordinary farmer, as all who listened to Jesus would have immediately recognized. 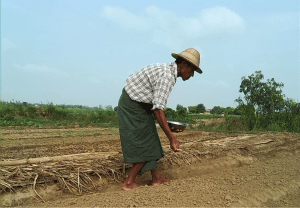 “A sower went out to sow, and as he sowed, some seed fell on the path, and the birds came and gobbled it up” (Mark 4:3-4). Some in the crowd would have instantaneously been troubled by the actions of this sower. What sort of sower is it, they would have asked, who would waste his seed by spreading it willy-nilly on some path near the field? No sower, worth a grain of his seed, would be so profligate as to fling the seed on a path! Little wonder that the birds had a feast, since the seed would be lying on the path ready for easy plucking. But this ridiculous sower was not done with his terrible sowing. “Other seed fell on rocky ground (why did the sower not till his ground first?), where it did not have much soil, but some sprang up quickly, though it had no depth of soil. When the sun rose, it was scorched, since it had no root; it withered away” (Mark 4:5-6). Little wonder, you stupid sower! How can you expect any harvest at all when you toss your seed hither and yon on stony paths and rocky and unprepared soil?

Undeterred by these initial agricultural failures, the absurd farmer continues his hopeless sowing by throwing some seed, quite randomly, among thorns, which quickly choked the struggling seeds, and yielded no grain. Just what sort of story is this about a sower who has no clue about how to sow? At last, says Jesus, some of the grain “fell on good soil and brought forth grain, growing up and increasing and yielding thirty and sixty and a hundredfold” (Mark 4:7-8)! Note that the grain “fell” on good soil, as if it was mere happenstance that it did, thus making the harvest the result of chance, rather than careful agricultural planning. And Jesus then concludes the narrative by saying, “Let anyone with ears to hear listen” (Mark 4:9)! Well, just what are we with ears supposed to listen to in the recitation of this story? The entire tale appears to be the story of a crazy farmer who lucked into a grand harvest by reckless scattering of precious seed on every surface he encountered!

After the vast crowd has dispersed, having responded not at all to the tale of the nutty farmer, Jesus is once again alone with the twelve disciples, who ask him “about the parables” (Mark 4:10). Are they asking about parables in general or about this parable? That is hardly clear, but Jesus’s answer assumes that the query is about the parables as a means of teaching. “To you has been given the secret (the mystery) of the rule of God, but to those outside everything comes in parables” (Mark 4:11). The clear implication is that the disciples must surely now understand “the mystery of the kingdom (the reign and rule) of God,” but for others that mystery will be hard if not impossible to crack.

Well, Jesus may have imagined that the disciples would immediately get on board with the secret of his gospel, but the fact is they do not! And after a series of three more parables concerning lamps, and growing seed (more seeds!), and a mustard seed (again!), we are told that “with many similar parables he spoke the word to them, as they were able to hear it; he did not speak to them except in parables, but he explained everything in private to his disciples” (Mark 4:33-34). Unfortunately, there is no evidence at all in the story up until now that the disciples have understood anything Jesus has been saying! They are as dense as the crowds, as dense as we, the readers, are. What are we to make of the story of the nutty farmer, who randomly casts his seed all over the place, wasting great quantities of it, and with apparent luck finally hitting some good soil that yields a vast harvest? Is Jesus the farmer, and if so, does he throw the word all over randomly? Mark 4:13-20 offers an allegorical explanation of the story, where the seed becomes the word given to all manner of folk, many of whom cannot hear it for various reasons, but finally there are some who can and do hear it, and “bear fruit”. 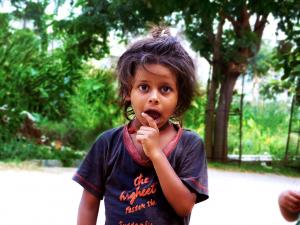 But I find the allegory too neat for a full appreciation of the story of the nutty farmer. The mystery of the rule of God is more peculiar, more odd, more secret than that. Its appearance is uncontrollable, not subject to human plans, to careful leadership goals, to administrative skills. It comes, all right, but it comes secretly, like the mustard seed, like the seed growing in secret. What we must do, apparently, is sow; we may or may not see any harvest. Every preacher and teacher knows the truth of that secret. We preach and teach, and nothing much appears to happen. On the day that Jesus was crucified, the world changed not a whit: the Romans controlled Israel, and the religious authorities imagined they had rid themselves of another trouble maker. But the seed grew, we know not how. “Do you not understand this parable,” Jesus asked his disciples (Mark 4:13)? Well, not really, we reply, not fully. After all, it is secret, a mystery. The word and will of God is like that.

January 7, 2020
The Peripatetic Preacher and the Necessity of Doubt
Next Post