I have long found the Christian doctrine of the Holy Spirit to be both vague and bizarre in its formulation. I suppose that statement itself may sound both odd and heretical, because since the Council of Constantinople in 381CE, the Holy Spirit was judged to be a full member of the Holy Trinity of the Godhead, one of the “three coequal persons,” as the orthodox theologians described the person of God, relegating any who denied that the Spirit was divine to heresy and anathema. Speaking theologically in those days was certainly a blood sport, unfortunately quite literally so in numerous cases. My opening sentence of this essay would have gotten me a one-way ticket to the stake if it had been uttered within earshot of the doctrinal police of that time. Fortunately for me, those days are gone, I hope forever, and I now may only be bound to the critical digital stake if what I say is found unacceptable to certain believers who think differently. And, believe me, I do have my “tie-him-to-the-stake” opponents even now, though their desire for my demise and sentence to eternal torment cannot be played out physically anymore.

When I entered seminary 52 years ago this fall, the Holy Spirit was not uppermost in my emerging theological brain and heart. I was wrestling far more with the nature of God, who for me was monumentally elusive, and Jesus of Nazareth, who I simply could not accept was in any exact sense a member of the Godhead. In short, as you can see, I had rejected the idea of the Trinity even before I knew very much about how that doctrine had evolved over the two millennia of Christian thought. The Holy Spirit sounded to me like a kind of wispy ghost, floating, unseen and unknown, in and among us struggling seminarians. Some of my women colleagues began to speak of the Spirit using feminine pronouns, arguing that the concept had its origins in the figure of Sophia, or a divine Wisdom, portrayed especially richly in the Book of Proverbs, and the Greek translation of Hebrew Chokmah. When I later studied this notion more deeply, I had to agree that the feminine image was a plausible and powerful one, and have ever since used feminine language when I have spoken of the Spirit.

However, I must admit that I have seldom spoken of the Spirit at all! It remains for me a peripheral idea in my theological bag of tricks, a fact that has proven very strange to many of my Christian friends who find in the Holy Spirit a most vital part of their lives of faith. At the very start of my seminary career, I heard someone say—I cannot remember who—that the Holy Spirit was “God’s other name.” Someone else claimed—again I forget the origin—that the Holy Spirit was “God’s nickname.” I assume that each of these rather cute formulations was an attempt to describe the third person of the Trinity in language that was familiar, if not overly trite. If one accepted the traditional doctrine of Trinity, then it would be quite appropriate to name the Holy Spirit using the same language one used for God or for Jesus. Was Jesus then also God’s other name or God’s nickname? I heard no one claim that, making me conclude that it was especially tricky for anyone to describe just who or what the Holy Spirit was!

I had a colleague on the faculty I joined in 1979 say to one of his students, after that student had questioned him about his omission of the language of the Holy Spirit from his lecture on good sermon preparation, “The Holy Spirit also tells us to head back to the library for better exegesis of the appointed text!” The student was not satisfied by that reply, since he had informed my colleague that it was the Holy Spirit who gave him all the words of his sermons. I will not repeat what my colleague said in response to this audacious claim, especially after the student had preached a class sermon that was essentially unintelligible! Still, perhaps this anecdote suggests that focusing on what the Holy Spirit actually does may bear better fruit than speculating on what the Holy Spirit in fact is.

In the New Testament the actions of the Holy Spirit are varied and numerous. A summary might be: 1) it is the Holy Spirit that is the motivating power in the birth, life, death, and resurrection of Jesus; 2) often the miracles of the gospels and other quite extraordinary phenomena are said to be products of the Holy Spirit; 3) the apostle Paul often ascribes to the gift of the Spirit the power for the faithful to live free from the compulsion to sinning, even that compulsion displayed in the apostle himself; 4) Paul also claims that the Holy Spirit manifests itself in a kind of life characterized by joy, peace, patience, goodness, faithfulness, gentleness, and self-control, the typical list of gifts that the Spirit may provide; 5) the Spirit is also the author of special gifts, says Paul: prophecy (i.e. preaching), teaching, even ecstatic utterance; 6) the Spirit is the source of that wonderful love of neighbor (agape), and as such is the basis for the unity of the church. Given that comprehensive list of the results of the work of the Holy Spirit, it could be said that the actions of the Holy Spirit among the faithful are nothing less than the actions of God as those are most clearly manifest in Jesus of Nazareth. And that, I suppose, is the basis for the ontological claims of the early church about the Holy Trinity. I still see little need to buy into the ontology of the Trinity in order to view the actions of God, Jesus, and the Spirit in the world today.

I might conclude that the Holy Spirit may be seen in her work among us, leading, urging, luring us with bountiful gifts and powerful challenges to be more than we can be when left to our own limited devices. We need the presence of that Holy Spirit as we traverse the terrors of the pandemic of 2020, that active force that offers us peace and gentleness, but that will not allow us to become complacent, imagining that we are on our own to sail the stormy seas of COVID-19. And I would say that the Holy Spirit tells us now to isolate and wear our masks in public, because not to do so is to threaten the lives of the most vulnerable among us. Remember that the Holy Spirit is the author of the unity of the church (Acts 2), so to endanger the other is to deny the gift of that unity. 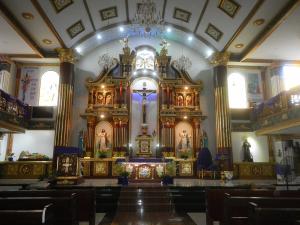 I guess that now that I have explored the various ways that the Bible employs the image or metaphor of the Holy Spirit, it might be for me a valuable tool as I, my friends, and my fellow human beings, attempt to find our way through this crisis together. The Holy Spirit in the end can be seen as the active presence of God in our world. Perhaps the Korean Creed is not far wrong as it delineates the Holy Spirit as “God present with us for guidance, for comfort, and for strength.”

May 15, 2020
The Peripatetic Preacher Jesus Messiah in the Time of the Virus
Next Post

May 20, 2020 The Peripatetic Preacher God Did Not Send the Virus!
Recent Comments
0 | Leave a Comment
Browse Our Archives
Follow Us! 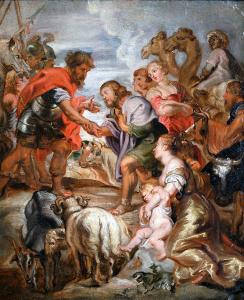