The Bible’s rich story is saturated with violence. As much as we enjoy saying that God is a God of love, and that God’s son, Jesus, embodied that unbreakable love in human form, there can be no denying the fact that endemic to both testaments, deep pools of violence are to be found. And though it is all too common to accuse the Hebrew Bible with brandishing its violent brush, and then proclaiming that with the coming of Jesus, that violence has been overcome, the fact is that violence permeates the New Testament as well. It is of course most prominently displayed in that testament’s central conviction: Jesus of Nazareth was tried and put to death in the most violent way imaginable. One need not refer to Mel Gibson’s frightful blood-fest of a movie, “The Passion of the Christ,” to admit that the horrors of the crucifixion, and the events leading up to it, are memorably cruel, dipped in beastly savageness. In addition, the first great missionary Paul writes monstrously frenzied attacks on the Galatian churches, that he himself founded, by suggesting that if they did not believe and adhere carefully to what he had taught them, then those who led them astray should just go on and castrate themselves (Gal.5:12)! And of course the Revelation of John is replete with images of violence, from the idea of the martyrdom of thousands to horse’s bridles, thigh-high in blood. Violence stains the Bible’s pages, and that stain raises painful questions for those of us who revere the Bible as sacred text, and who continue to find in its pages fruit for life and thought in our own century.

Over the centuries, what has been done to deal with these many passages, some of them little less than abhorrent to us moderns? I would suggest that four strategies have been employed to in some ways vitiate the shock of these texts. Three of them I find ultimately not helpful, and the fourth raises many questions of its own, but might perhaps help the modern reader at least to understand just why these passages appear so often in our Bible and may aid us in our engagement with them.

The first tactic has been a simple avoidance of these texts, pretending that they do not exist. The Revised Common Lectionary, that list of texts suggested for preachers to use as sermon fodder on Sundays, in the main employs this strategy. One looks in vain for texts of violence with which to wrestle come the Lord’s Day. Not only are there no “texts of terror” (to use Trible’s trenchant phrase), concerning violence against women to be found in the lectionary; there are scant textual attributions from Joshua’s demand for Canaanite annihilation, very few Psalms of lament/complaint (which constitute well over 1/3 of the psalm’s total of 150), tiny usage of the furious prophetic texts that call down divine anathema on foreign nations and Israel alike, very few suggestions about the hard sayings of Jesus and the wilds of Revelation. The fact is that the lectionary is a highly truncated look at the biblical canon, centering its attention on the ways that God “ought” to be seen, or perhaps has been seen through the centuries, rather than on the much more complex portrait of God that the canon presents. Avoidance of this texts of violence is both arbitrary and denies that vast swatches of the Bible actually exist. Not to take these texts on in some fashion opens the Bible up to ridicule by those who find it a curious and ancient paean to archaic practices that only savages would condone. We must address these texts. 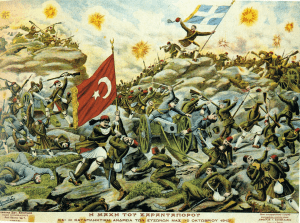 The second way that readers have approached these texts of violence is to say that the writers have in effect created God in their own violent images. Surely, when the poet of Ps.58 cries, “The righteous will rejoice when they see vengeance done; they will bathe their feet in the blood of the wicked” (Ps.58:10), he/she was expressing her/his own desire for vengeance against powerful enemies, and pushing those rank desires into the skies, fixing them on God. A bathtub full of wicked blood is hardly the way we wish our prayers to be expressed! Is God in fact such a God, or is the poet merely wishing for such a vengeful God? There may be a certain truth here, but the fuller meaning of that possible truth must await our discussion of the fourth tactic.

The third approach may be the most common and to me the most insidious. These are the readers who see in the text a developmental view of God, beginning with a primitive, violent deity, redolent of the blood thirsty gods of the nations surrounding Israel, but eventually recognizing that God as in reality merciful and loving as Israel’s theological thinking moves toward the ideas that found fulfillment, first in the more uplifting words of the prophets (see Hosea 11), and ultimately in the coming of Jesus in the New Testament. I find this dangerous for two reasons. First, it is just wrong to claim that ancient texts are more violent than later ones. Genesis is filled with texts of deep compassion, offering any number of portraits of God that stand with the later pictures of God found in Jesus. For example, who could read the fabulous text Gen.8:20-22, where God in the face of continuous human evil, promises never again to destroy them, and not feel the amazing and surprising forgiveness of YHWH? And, as I have said, one of the Bible’s final compositions, the Book of Revelation, bristles with violent imagery. The second problem with this developmental viewpoint is that it inevitably tends to denigrate the Hebrew Bible as dangerous for Christian faith, a book filled with dark and evil violence, cleaned up by the coming of Jesus. To reject the Hebrew Bible and to caricature it in this way is to miss its wonderful gifts for Christian faith, and too often leads to a concomitant caricature of Judaism whose sacred text it is. Nazi Germany taught us of those dangers all too well.

The fourth approach to the violent texts of the Bible may be called the contextual approach. It may be summarized as follows: it can never be forgotten that these texts were composed by people living in the land of Israel, a tiny strip of rocky soil, perched on the edge of the Mediterranean Sea, surrounded by vast and stories empires, Egypt to the west, a fabled land of enormous antiquity and culture that was nearly 3,000 years old when tiny Israel first emerged, and multiple empires to the east, from Sumer to Old Babylon to Assyria to New Babylon, and finally to Greece and Rome. Israel’s land was little more than a blip, a flyspeck on the gigantic bodies of these increasingly enormous empires. How could Israel survive when faced with near continuous onslaught from the west and the east, as nation after nation clashed for land and riches, regularly marching through and over miniscule Israel in the process? With unbeatable foes in every direction, there is little wonder that many written texts speak of the miraculous defeat of these enemies through the power of God, little surprise that the language tended often toward the ferocious and the unguarded. There was finally no way that Israel could defeat them without fire and fury, brought down by their God.

This is in no way to excuse this language; it does not condone the unmitigated violence celebrated by biblical poets and prose stylists. But I do think it helps our understanding to know that the writers were Israelite, pawns in the grip of the big powers, helpless minnows in the great sea of sharks that constituted the Middle East throughout Israel’s history. And because this context is so important to understand, it also forces us to be excessively careful in our modern applications of such texts. For here is the reality in the 21st century: we are no longer the minnows of the world—we are the sharks now; we have the power now. Thus, for us willy-nilly to bring these texts of fury into our time and apply them against our supposed enemies is to misuse them, to misapply them completely. The Bible was written by the oppressed against the oppressors in the main. We modern Christians have too often become the oppressors in our time and have no right to employ these texts against those supposed foes that we in fact are oppressing.

When President Trump held his infamous photo op, Bible raised high, as an apparent statement that that Bible gave him the right to use force to clear the streets to enable that photo to be taken, he offered a singular example of the point that random use of the Scripture for personal power against perceived enemies is little less than blasphemy, a thorough misapplication of the Bible and its texts of power. How crucial it is for all to remember just what particular historical context engendered those texts, and that ripping them from that context can lead to all manner of Bible mischief. These reflections hardly solve the painful issue of biblical violence, but at the very least it may help us understand why such texts are there, and how ubiquitous they in fact are. 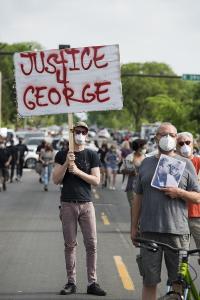 July 3, 2020
The Peripatetic Preacher God: The Problem
Next Post