The Peripatetic Preacher Gaslighting and Responsibility in the Garden

The Peripatetic Preacher Gaslighting and Responsibility in the Garden July 7, 2020 John C Holbert

The much-used term “gaslighting” has its immediate origin in a 1938 play of that name by George Hamilton. It was made into two movies in the 1940’s, the latter of which starred Ingrid Bergman and Joseph Cotton, directed by George Cukor. It is a tale where a husband attempts to convince his wife that she is going insane by manipulating their environment in various ways and then denying that he is in fact doing so; for example, he slowly lowers the gas lights in their house, while telling her the lighting is in fact not diminishing. Gaslighting has become a recognized term in the mental health world, defining abusive relationships between parents and children, spouses, and other social contracts. Sociopaths and narcissists are usually adept at this tactic, attempting to force victims into believing that their perceived realities are in fact false. The technique has been much in evidence in recent days, particularly employed by the current president of the US.

While our country faces a raging COVID-19 pandemic that as of this writing (July 7, 2020) shows little signs of decreasing, with nearly 3,000,000 cases and over 130,000 deaths, along with continued unrest over the brutal actions of police against African-American citizens and the protests against such clear and pervasive racism, the president spent his 4th of July weekend touting the attacks of “ultra-leftists” and other unsavory “thugs” on the history of the country by demanding the removal of monuments to numerous Civil War figures who fought for the Southern states against the Union 160 years ago. In addition, he complained about the removal of the Confederate battle flag, the Stars and Bars, and all of its representations from all NASCAR events, a sport once replete with the symbol. Since that decision was taken, the president has crowed that the TV ratings for NASCAR have plummeted (in reality, they have gone up nearly 8%, according to the broadcasters). Here is gaslighting at its best. While millions are infected and hundreds of thousands die, Donald Trump offers little acknowledgement of the virus, and only the tiniest empathy with its suffering. And while thousands of Black citizens cry out for justice, and are joined by increasing numbers of their white neighbors, Donald Trump speaks only of statues and thugs. We must be afraid, says the president, not of the virus or racism, but of liberals and any who would dare to destroy American greatness, as represented by the power of the military and the beauty of our statuary.

Of course, Donald Trump is hardly the first politician, or world citizen, to gaslight with impunity. One need only listen to any TV interview to witness the technique in full flower. Just watch as a reporter asks a question, and pay attention to the answer. Seldom does one hear an answer to the question posed, especially if the question is seen as too probing, too confrontational, too uncomfortable. Any one of President Trump’s press secretaries, and there has been a long line of them, can offer gaslighting at its horrifying best. Never expect to hear answers to questions; expect to hear commentary designed to deflect, confuse, or confound.

Another key outcome of gaslighting is the refusal to accept responsibility for dangerous or difficult events that occur in the country. Gaslighters always search for and find convenient scapegoats who invariably are the “real” source of the dilemma. If the virus surges, it is the problem of the states and their governors. If health care proves inadequate to the task, it was the previous administration’s problems, an ignorant crowd that left the country unprepared and in a mess. If too many people protest, it is because the “liberals” have stained us with their absurd demands and their unpatriotic actions against our history and culture. It is never the fault of the gaslighter, whatever the issue may be. It can easily be said that we are in 2020 awash in gaslighting, most certainly from Donald Trump and his minions, but also from so many others who would rather blame anyone else than take any sort of responsibility for the painful issues of our time.

For any of you who have read my essays in the past, you just know something from the Bible is coming, and you would be correct. Gaslighting was not invented by Hamilton’s play in 1938; he merely named a technique that may be found from the beginning of human history. The magnificent and unforgettable Genesis 3 is classic gaslighting, and hilarious gaslighting to boot. Listen to it again with the gaslighting lens in mind.

The man and the woman are in the garden of YHWH, and are warned that eating the fruit of the tree that stands at the garden’s center will result in death, though it is named the tree of “the knowledge of good and bad,” or more colloquially “the knowledge of everything.” In short, to munch on that tree’s fruit will lead to near-divine wisdom, a tempting treat indeed. And of course, as all humans might be expected to do, both of them have a taste, but instead of dying, they discover that they are nude, a fact that was not a problem earlier in the story, but now seems to cause them some embarrassment, enough to force them into sewing fig leaf aprons to cover up the salient parts.

YHWH soon shows up for an afternoon stroll in the cool garden, but arriving at the usual place for tea, discovers that the two humans are not there. So, YHWH asks the very simplest of questions: “Where are you?” Many replies can be imagined for this question: “I am over here;” or “We are playing hide and seek, and you are it;” or waving energetically while shouting, “Yoo-hoo!” Instead the man offers a superb example of gaslighting. “I heard your sound in the garden, and I was naked and afraid, so I hid myself.” That is a supremely loquacious response to the question “where are you”! And it does not at all answer the question of “where,” or if it does it is an oblique answer in the extreme. But the gaslighting gets even more creative when the man is then asked, “Who told you you were nude? Have you from the tree that I commanded you not to eat from it eaten?” (Suddenly, YHWH becomes German, plopping the verb of the sentence at the very end in a thoroughly un-Hebraic way.) And the man answers, “The woman, whom you gave to be with me, she gave me fruit of the tree and I ate.” Now that is gaslighting! It is surely not my problem, says the man; it is the woman’s problem, but since you gave the woman to me, it is finally your problem! Have you eaten from the tree, asks YHWH, a yes or no question. But the answer ensnares the woman and God so that no real answer to the question can be provided. And since no real answer is forthcoming, no responsibility can be assumed.

And to make the gaslighting complete, when the woman is asked what she has done, she points at the snake who “made me do it.” With all gaslighting complete, the man and the woman wash their hands of the whole thing, and leer at the snake, with also a corner-eyed look at YHWH, and imagine that they are free and clear of any responsibility for fruit-eating or anything else. They, of course, are wrong, as YHWH makes all too clear in the subsequent announcements of the mess they have made of things, and their requirements to vacate the garden, albeit clothed in soft skins rather than scratchy leaves.

I, as a white male in this culture, have done my own share of gaslighting, as I have hidden behind my whiteness to reap the continued benefits of a culture created for me, all the while denying that I am racist at all, and as I have claimed my authority as male over against my female colleagues, accepting silently a power that the culture for millenia has given to me as a male. My near constant attempts to deny these realities, and to continue to claim that I “understand” what it means to live in a racist culture, and “understand” what the power of patriarchy really is, are my gaslighting deflections from looking at my racism and sexism squarely to enable a genuine listening to my Black and female colleagues in order to address those myriad ways that I have been both in control and unwilling to give up the power that is part and parcel of a white-dominated, male- dominated society. When I gaslight, I refuse responsibility to pay attention to voices unlike my own, and to learn from those voices how I can become an ally in the struggles for justice rather than the gaslighting impediment I have too often been. The man and the woman of the garden hardly died long ago; they are both alive and well and living in many of us. Let us face them squarely, and thus face ourselves, in order that our own gaslighting may cease. 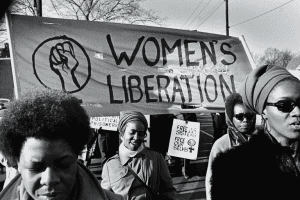