The Peripatetic Preacher The Hollow Ones

The Peripatetic Preacher The Hollow Ones July 20, 2020 John C Holbert

There are times in my life when only poetry seems to speak clearly yet elusively enough to capture something of the tenor of the day. I have long been a fan of T.S. Eliot’s spare and complex verse as a window on my world. Much of his very greatest work was written when he was quite young. Perhaps his most famous and influential poem is “The Waste Land,” written in 1922 when Eliot was only 34 and in the process of renouncing his American citizenship to become a British citizen. In addition to that significant alteration in his life, he then joined the Anglican Church in 1927, announcing thereby his conversion to Christianity, a generally unusual move among 1920’s intellectuals, most of whom were deserting the old faith for something like agnosticism and/or atheism. The poem, “The Hollow Men,” appeared in 1925, and reflects the in-betweeness of Eliot’s life at the time, as well as the rapidly changing world following the horrors of World War I and preceding the coming terrors of an even more monstrous World War II.

I am especially attracted to this poem in 2020, precisely because we are also again in the midst of a rapidly changing and terrifying world. Our world is faced with a frightening pandemic that appears to have no end, along with a serious confrontation with stark racial inequalities between the long-powerful white culture and the continually oppressed Black and Brown cultures in its midst. Many of us who are white are only now listening to our Black and Brown colleagues in ways that we should have done for decades, if not centuries. The issue for us white people is: will we at last take seriously the cries of those who have been abused and rendered second class by our unthinking and sleep-walking approaches to the culture we have just assumed was working well for all the world’s people? Recent events have made it abundantly clear that many of our assumptions were and are patently false and injurious to the many others who have not been allowed to participate fully in that very culture. The pandemic itself has laid bare the wide gaps of health access, work dangers, and living situations that people of color have endured while the comfortable and elite, primarily we whites, have been able to employ our whiteness to full advantage in matters of health, work, and home that enable us to avoid the dangers and depredations that many of our fellow world citizens regularly must face.

How will we privileged ones respond to those challenges to our power? Eliot named too many of our responses as those of “hollow men.” “We are the hollow men; We are the stuffed men Leaning together Headpiece filled with straw. Alas!” The immediate reference for this stark and unforgettable image is the figure that every English person knows as the image of Guy Fawkes, one of the conspirators who attempted to blow up the Houses of Parliament, along with King James I and his court, on the night of Nov.4, 1605. That potentially catastrophic event and its discovery before its devastating blast, is celebrated every Nov.5 in England with the construction of an image of Guy Fawkes, usually made primarily of straw for easy burning. This image, often 20 feet tall or more, is then set on fire, and as he burns, many in the crowd shout, “A penny for the Old Guy,” a phrase Eliot places at the beginning of his poem. The evening’s fun is often a cold one in England, with drinks of hot chocolate, or liquids of a harder sort, adding to the festivities. But for Eliot the image of straw also speaks, and this is what he  says: “Our dried voices, when We whisper together Are quiet and meaningless As wind in dry grass Or rats’ feet over broken glass In our dry cellar.” We straw-headed ones talk, but our speech is whispers only, and are both quiet and meaningless, dry as wind, tiny tinkling sounds like rats’ feet scuttling across glass shards in a dry cellar. In other words, the conversation between we straw-headed ones is dry, without meaning, “Shape without form, shade without colour, Paralysed force, gesture without motion.” The images of emptiness pile up in the poem until we observe a searing portrait of futility and hopelessness, representing conversations without purpose, chatter without content. Such are the dangers of talk from people with heads filled with straw.

Eliot adds another more literary reference at the very head of the poem, right under the title, “Mistah Kurtz—he dead.” This is what the would-be assassin, Willard, is told by a Congolese native as he sought the monstrous colonialist, Kurtz, in Joseph Conrad’s famous novella, “The Heart of Darkness.” Many US viewers of the classic Francis Ford Coppola movie of 1979 “Apocalypse Now,” will recognize the figure of Colonel Kurtz, a soldier gone rogue in the jungles of Cambodia, who is hunted down and murdered by Captain Willard during the horrors of the Vietnam war. In the film, Kurtz’ Final words are “the horror, the horror,” a summary of what the war in Southeast Asia had become, and a commentary on the harsh inhumanity that the war and those who fought it engaged in day after day. Eliot, fresh from the unspeakable atrocities of World War I, a war that consumed fully 30% of the British male population in the muddy trenches of France, surely imagined all conversation in the light of that only dry and meaningless.

But hope springs up for Eliot, albeit hope surrounded by the constant fears of dry meaninglessness. Toward the poem’s end, he summarizes where we now find ourselves, in between fear of no meaning and the hope of eternal meaning: “Between the desire And the spasm Between the potency And the existence Between the essence and the descent Falls the Shadow For Thine is the Kingdom For Thine is Life is For Thine is the” Eliot seems at the end to be struggling for a larger meaning for us and for himself as he resorts to a quotation from the Lord’s Prayer, “For Thine is the Kingdom.” In the apparently dry and useless chatter of those of us made of straw, there intrudes the possibility that whatever meaning there may be is to be found in the reality that God is the final arbiter of the Kingdom of this world. However, that burst of certainty is pierced, perhaps, by the fracturing of the quotation in the next lines: “For Thine is Life is For Thine is the,” and the word “Kingdom” is missing. What is substituted is the rhyme, “This is the way the world ends (repeated three times) Not with a bang but a whimper.” I would suggest that the reference to God’s kingdom is one way of finding redemption in the midst of the incessant dry chatter of straw-filled men and women.

Eliot both warns us and urges us at the same time. In these days of a powerful virus and a necessary conversation about race and inequality, it will not do for us to descend again to strawy prattle; we must both wear our masks and engage in the most serious of talk with those who deserve from us more than empty words. But we will not be able to sustain either an assault on the virus or a serious struggle with our racism until we recognize that whatever kingdom there may be is not ours, but God’s. I am so grateful to T.S. Eliot, who nearly 100 years ago offered me a way into my too easy chatter, coupled with a reminder that all talk must be infused with the certainty that God stands with us in our talk, urging at last to empty our heads of straw and to fill them with fact, and openness and hope for a better future. 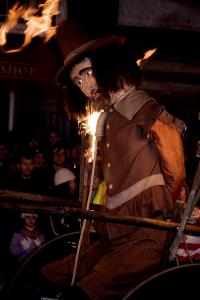 July 14, 2020
The Peripatetic Preacher Love When We Need It
Next Post

Key findings about religion and 'abortion'...
slacktivist
Related posts from The Peripatetic Preacher